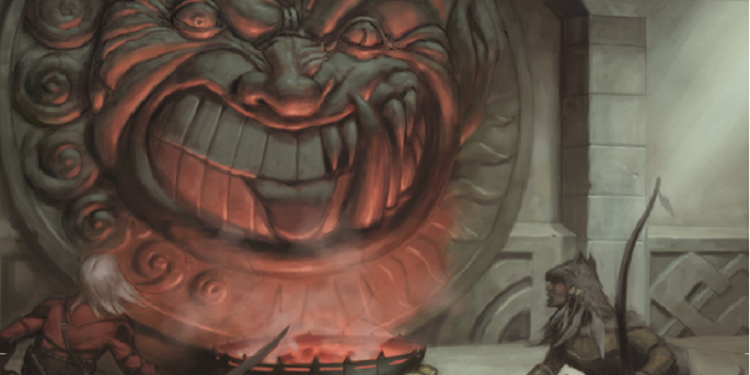 These shrines are designed to be slotted into a region and visited during a game as a side trek or as part of a larger issue.

Altar Description : Armored female warrior with sword and shield, made from gold.

Geographic Challenges : Door opened by tears from a living creature.

Inhabited By : Human Paladins. Their numbers are few, but their resolve is good.

Watched By : Iuz Cult. Seeking to lure followers of Mayaheine into ambushes.

Pay respect to the shrine : Gain a tactical insight for the next fight.

Blaspheme the shrine : Your enemy learns your exact location.

Notable aware of the shrine – Guiliana Mortidus of the Horned Society.

Altar Description : Sun shaped brass platform with praises to Lydia carved around the sun. The scent of jasmine pervades the area.

Inhabited By : Elven Bards. Happy to share tales and song.

Pay respect to the shrine : You compose a hit tune or song.

Blaspheme the shrine : Blinded for D8 days if you fail a DC 16 Fort/Con save.

Notable aware of the shrine – Lady Evaleigh of Ratik.

Altar Description : Five foot goat skull made from Onyx. Pinnacles of light within the skull seem to move following your movement.

Activities : Corpse robbing and animating for fun and profit.

Watched By : Pelor Church. Suspicious of nocturnal activities, they need opportunity to bring the cultists to justice.

Pay respect to the shrine : Ability to command Skeletons and Zombies for 1 month.

Nearby Quest using From The Ashes boxed set : Beckoner in the Dark (6th)

Notable aware of the shrine – Jallarzi Sallavarian of Greyhawk, Circle of Eight.

Title artwork is from dungeon magazine, Shadow of the Abyss adventure for Greyhawk, available at paizo.com

My experience with Call of Cthulhu (Why ...