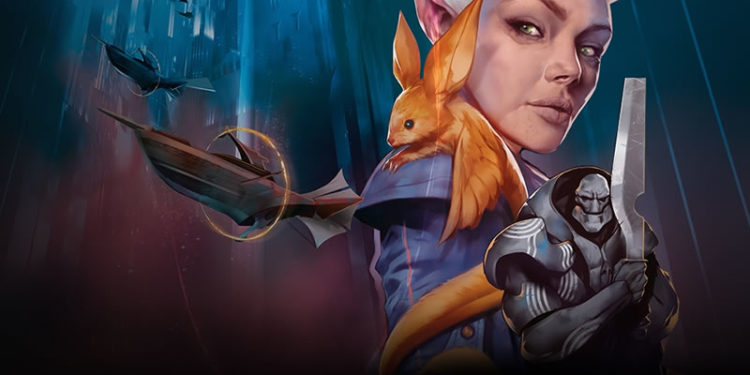 A very exciting press release was just sent to my inbox. A new hardcover D&D 5e Eberron book has been announced and it is not Wayfinder’s Guide to Eberron. Below you’ll find product details, side by side covers, and the press release. The artificer class is finally coming to hardcover!

A PDF of Wayfinder’s Guide to Eberron was released back in July 2018 and was last updated in February 2019. The PDF provides a 175 page “overview of Khorvaire and the fantastic city of Sharn, along with a host of background ideas and story hooks.” This living document also provides playtest material for Eberron races, dragonmarks, magic items. How (and if) Wayfinders will see a hardcover release with Eberron: Rising from the Last War Coming coming this November has not clearly stated in the press release. We are seeing some overlap with the mention of dragonmarks being in the new hardcover too. I’d guess that the four new PC races might have overlap too.

Here are the details from the product page for Eberron: Rising from the Last War Coming…

Explore the lands of Eberron in this campaign sourcebook for the world’s greatest roleplaying game.Whether aboard an airship or a train car, embark on thrilling adventures shrouded in intrigue! Discover secrets buried by years of devastating war, in which magic-fueled weapons threatened an entire continent.

In the post-war world, magic pervades everyday life, and people of all sorts flock to Sharn, a city of wonders where skyscrapers pierce the clouds. Will you find your fortune on mean city streets or scouring the secrets of haunted battlefields? Will you throw in your lot with the mighty dragonmarked houses, ruthless families who control whole nations? Will you seek truth as a newspaper reporter, a university researcher, or a government spy? Or will you forge a destiny that defies the scars of war?

This book provides tools that both players and Dungeon Masters need to explore the world of Eberron, including the artificer character class—a master of magical invention—and monsters birthed by ancient warmongering forces. Will Eberron enter a prosperous new age or will the shadow of war descend once again?

There will also be an alternative cover available at your local game store (FLGS). Here are the two covers side by side. 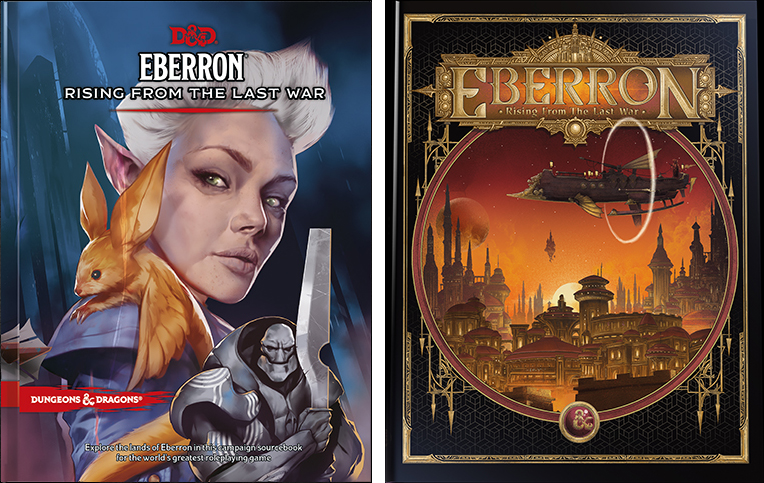 RENTON, WA – August 19, 2019 – The world of Eberron offers an industrial take on fantasy storytelling with trains powered by lightning, airships docking above cities lit by magical streetlamps and manufactured humanoids walking among the elves and humans of the land. Eberron: Rising from the Last War is a 320-page book detailing the war-torn continent of Khorvaire, along with a wealth of features for D&D fans to incorporate into their characters’ adventures. It also introduces the artificer, the first new class made available for D&D since the release of the Player’s Handbook. Look for Eberron: Rising from the Last War everywhere on November 19, with a special alternate cover only available through game stores.

“Fans have been clamoring for more Eberron ever since we digitally released the Wayfinder’s Guide to Eberron last year on the Dungeon Master’s Guild,” said Nathan Stewart, Vice President of the D&D franchise at Wizards of the Coast. “Eberron: Rising from the Last War is the culmination of hundreds of playtests and player feedback sessions, and we think fans looking for something new will enjoy adventuring through a world with magically powered trains, airships, and mechanical beings.”

In addition to the artificer class—which fuses technology and magic—players will also be able to customize their characters with four new races and twelve magical dragonmark tattoos. A new game element called group patrons also provides parties with shared background features, helping to define adventurers’ roles in the post-war world.

Dungeon Masters can also expect to find a new cache of tools in Eberron: Rising from the Last War, including an overview of the continent of Khorvaire, a gazetteer of the towering city of Sharn, maps of lightning-powered trains and industrial workshops, plus tons of adventure hooks and details on designing adventures set after the Last War.

Coinciding with the release of Eberron: Rising from the Last War on November 19, the D&D Adventurers League will release a new season of stories called The Oracle of War. Across twenty episodes, players will discover an incredible treasure in the magically devasted Mournland, an artifact they swiftly discover is desired by every faction in Khorvaire. Fans can find out about organized play campaigns in D&D Adventurers League at dndadventurersleague.org.

For more information on Eberron: Rising from the Last War and Dungeons & Dragons, please go to dungeonsanddragons.com.

Factions, renown and how to make your ...