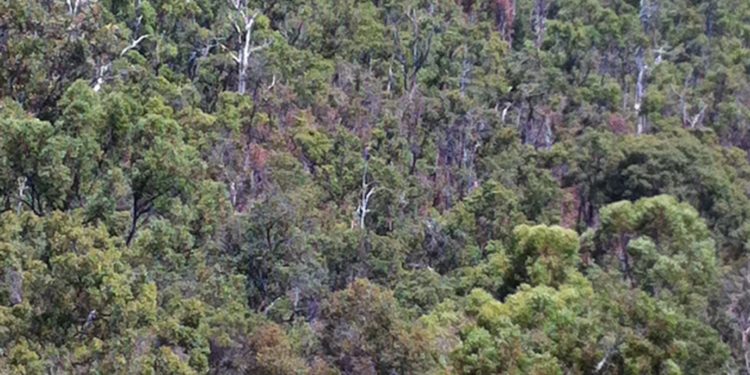 This 20 by 20 mile Forest area has been designed to slot into the forest of Fellreev on Greyhawk, but can be used for other northern temperate-cold climate forests.

Notes about the region : In Greyhawk this forest area would be in the south west Fellreev forest in the Horned Society lands. During the Greyhawk Wars much of this area was explored and trashed by the various humanoids and fiends who serve the demi god Iuz.

Factions : Bugbears, Mercenaries and Hobgoblins. Hobgoblins are trying to recruit the Bugbears. The Mercenaries are running out of supplies but not allied to any one.
Temples : Shrine to Asmodeus. The shrine was defaced during the Greyhawk Wars.

• Scorched landscape where magic was used. Acid and Fire burn marks all around. Little grows there now. Ask the Player left of the GM-How does this remind you of something from your teenage years?
• Farming Village – Before the war. Peaceful village of farmers. 20 families of Humans.
• Mine – Iron mine, hundreds of feet deep. Roughly 50,000 gp worth of Iron left in the tunnels.
• The statue of Asmodeus is bronze with four arms. The hands hold a heart, some coins, a scroll, and a dagger. Ask the Player right of the GM-Something here reminds you of your childhood, what is it?
• Bugbears – Their chief has met one of the PC’s before (2nd player to the GM’s left). What happened last time? Did they reach an understanding or enmity. 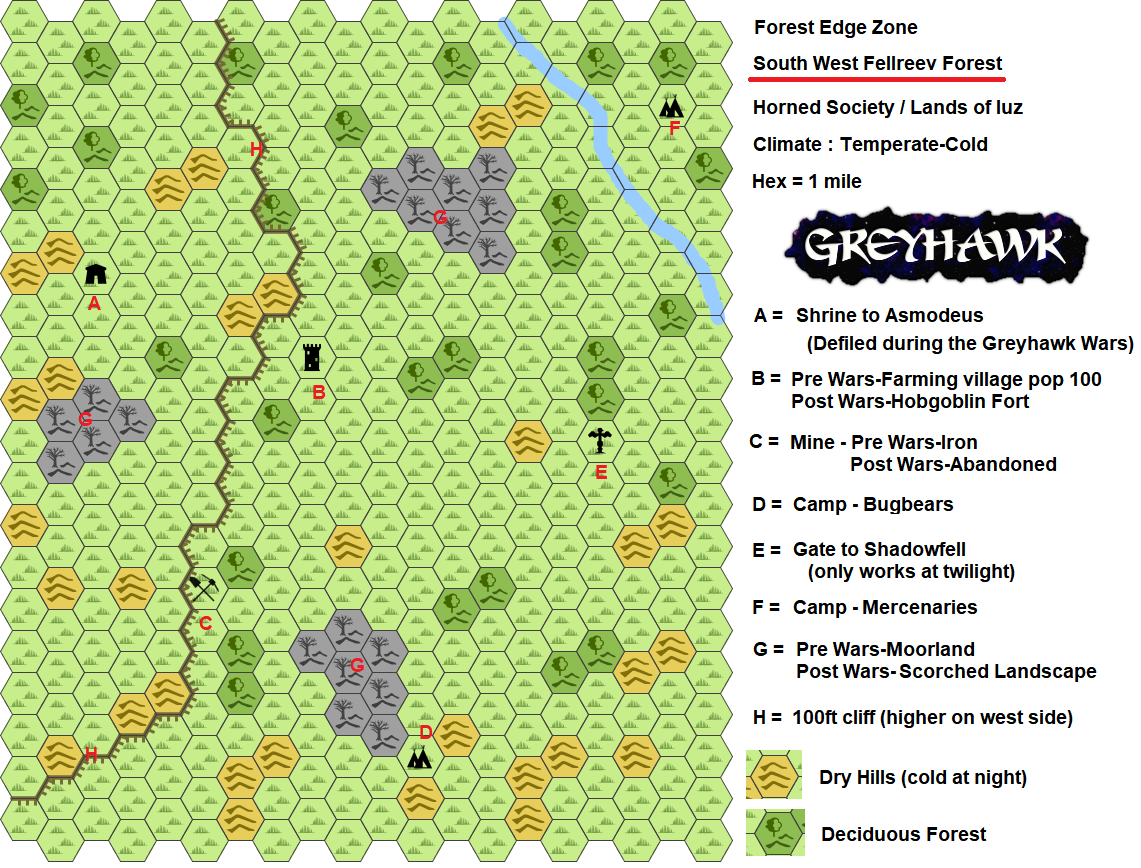 Odd feature you can drop in whenever-wherever : Portal to elemental plane of Air – Spot where the wind blows in a whirlwind opposite to exterior winds. This is only active when there is a strong breeze.

• Recruiter/Reward : Wealthy Merchant (Horned Society). 200 gp each.
• Quest : Need aggression from groups in the area to stop. Either remove the biggest threat or get them to sign peace treaty.
• Non-Combat Challenge – Each group wants to be top dog.
• Curve Ball – Farmers/Hobgoblins want the heroes to stay in town, thinking its safer with them here.
• Traps/Hinderance – Imps sent by Iuz to scout out the area, causing mischief before fleeing.

• Recruiter/Reward : Knights of the Hart. Reputation boost in Furyondy/Veluna.
• Quest : Locate a missing Knight of the Hart in area. Alive during war-hit and run vs Iuz minions.
• Non-Combat Challenge – Bugbears took him prisoner and sold of his stuff in Highfolk.
• Curve Ball – Shadows come at night via the portal, sent to take the Knights soul for the Nerull Cleric camped close by in caves in the Shadowfell.

• Recruiter/Reward : Highfolk Council or Hobgoblins of the area. Offer 3*3 mile area in north west part of the map.
• Quest : Gather equipment from the mine, check the mine for monsters and minerals.
• Non-Combat Challenge – If things get slow, have a Scrub fire or Blizzard rolls through. Everyone fleeing everywhere.
• Curve Ball – Horned Society offers to recruit the heroes, keep the area clear of anyone he says. Work for 1,000 gp/year. Money is counterfeit.
• Traps/Hindrance – Unstable mine tunnels, poisonous gas vents.

Other creatures in the area : Grung recently moved in trying to create a Wastri shrine.

For more on the Horned Society, see Oerth Journal 24 https://greyhawkonline.com/oerthjournal

Factions, renown and how to make your ...