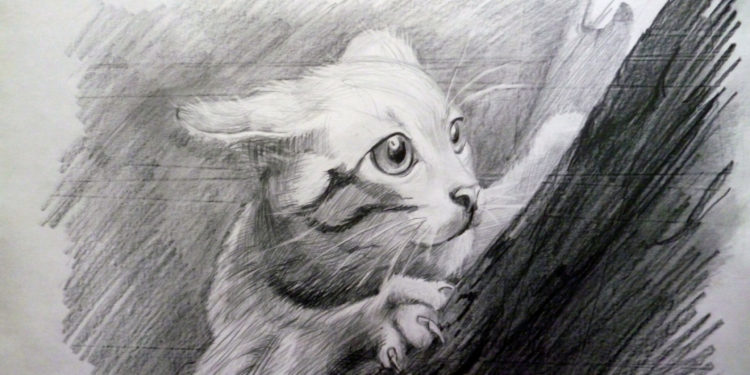 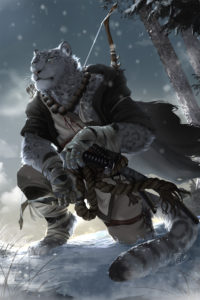 Broken Pickle, Bag o’ Clippings and their son Lil’ Pointy Peanut are a family of traveling tabaxis. The latter is just a year old and the source of many antics. They don’t have much money so they steal or beg for coins in the streets to survive.

Last night, this tabaxi family managed to steal not only money but also food rations from a group of bandits in the woods named the ‘Bloody Wagon‘. They managed to escape, but not without being seen and hurt in the process. The bandits are coming for revenge with the intent of taking their lives.

The Bloody Wagon gang is lead by a dwarf called Kundren Soiledbeard. The group is named that way because all people or animals they kill are thrown inside a wagon they travel with, leaving a trail of blood behind. In a way, they use that as a warning sign for travelers.

Tabaxi in the tree

After some travel, you encounter a trail of blood going to the west. It looks and smells recent, filling the air with a scent of meat.

The players can find out horse footsteps and wheel markings follow that same path with a DC13 Wisdom (Survival) check. At that moment, the players can decide if they wish to continue their own way or follow the trail. No matter the decision they take they will start hearing some shouts.

Shouts resonate at your side. There you can see two tabaxis looking toward the skies. The one who seems to be female is shouting “Jump down! Papa and I will catch you. Don’t be scared!”. She has a bleeding wound that covers most of her tiger striped side. Even though it is patched up you can notice she is not able to move much. The other tabaxi, on the other hand, is all white with some black spots in a cheetah-like way, carrying a longbow on his back. His right foot seems extremely hurt, as if it has been recently caught by a bear trap.

If the players have been following the trail, they will notice it keeps going boarding the place the tabaxis are in. Were the PCs to ignore the tabaxis and continue the bloody trail they would find the Bloody Wagon gang getting ready to ambush the family. If, on the other hand, they approach the tabaxi family, read the following text.

“I’m too scared” can be heard from above. A tiny, probably not bigger than two years old, orange spotted tabaxi can be seen on the top of a tree standing 50ft from the ground. “Please! You have got to help us save our child!” says the father figure, while looking at you. “Formalities can come later”.

The players have got one round to help Lil’ Pointy Peanut down. At the top of initiative of the next round, 5 bandits (MM p343) and Kundren Soiledbeard show up. Three of the bandits will shoot from afar while Kundren Soiledbear and other two of them go attack Broken Pickle and Bag o’ Clippings from a melee standpoint. They will focus their attacks on the tabaxis until someone becomes more menacing. If told to, Broken Pickles will help in the fight with his bow, but will stand below the tree to catch his child in case it falls otherwise.

Climbing the tree consists of two successful consecutive DC15 Strength (Athletics) checks. They can use climbing gear to make the rolls with advantage.

If a bandit gets below half their hp he/she will try to escape. Kundren will fight until the end, as he finds no honor in fleeing from combat.

On Initiative 20 after the bandits appear the branch Lil’ Pointy Peanut is in begins to break. He will fall in the following turn on Initiative 20. It takes him a full other round to hit the floor.

If someone stands below the tree branch by the time Lil’ Pointy Peanut reaches ground level it will receive no damage at all, and run towards his parents. Else, he will receive 1d6 damage bludgeoning damage.

Add as many trees as you want to the battle map or suggest the players take cover behind them if you are playing in Theatre of the Mind. Bandits who decide to use crossbows to attack will try to remain under total cover whenever they can.

Unless convinced otherwise, the tabaxi family will escape as soon as they get their child from the tree. They are carrying one healing potion, 15 one day rations, 86gp, 54sp and 4 cp with them.

The Bloody Wagon itself has 23 one day rations, 16 gallons of water, two lion pelts (5gp each), owlbear pelt (10gp) and 4 unidentified corpses.

If your players decided to leave the couple alone when they first encounter them and don’t follow the blood trail the players will get attacked by the Blood Wagon gang when they set camp at night.

If the party helps the tabaxi family by killing all bandits they will act very thankful towards the players and give 1gp to each of them, saying that’s about everything they can give the PCs. A DC15 Wisdom (Insight) check can clearly see through their lie. However, if the party decides to side with the bandits and kill the tabaxis, Kundren Soiledbeard will invite the party to join the gang.

Suicide Prevention Month: How to Be a ...