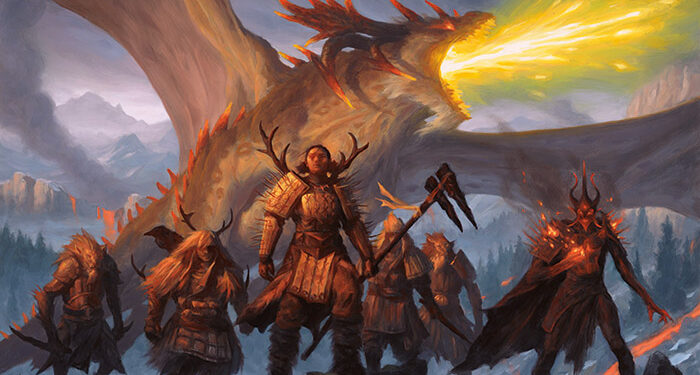 If you’ve been following my articles you may have seen many of the monthly encounters I wrote for Tribality. I’ve been writing them for more than a year by now and I intend to keep on the tradition by posting a new one the first Wednesday of each month. However, for those in need of an easier way to find the ideal encounter to their table I bring you this new article! In here, I’ll update the list every month by adding in the new encounters as I write them, so make sure to bookmark it.

The encounters I wrote were made with the intention of feeling different from your usual random encounters. I tried to make them complex enough to feel special and grant a different play experience while being simple enough to run. All things included within them can be accessed for free thanks to the D&D SRD. Links to all monsters and magic items are contained within the articles to make it easier for you to run them. Homebrew items used are described in the article.

A tabaxi couple is trying to bring their son down from a tree he climbed. As this is going on, a group of well-known bandits attack them for stealing. Player characters encounter this scenario going on in which they have to decide which group to help out without having any context. While this is going on the little tabaxi child is about to fall from the tree.

The PCs need to help a Candlekeep member find his partner in hell, who is trapped in a misty section souls cannot get out from unless convinced to leave their troubles behind. It is encouraged to treat this as a roleplaying-heavy encounter, with combat against hell hounds by the end of it.

A group of dwarves got cornered against a cliff by a purple worm. Most of the dwarves are clearly not ready for combat and plead the adventurers for help. The map encourages tactical combat and rewards great positioning. The purple worm has learned how to get launched from the holes it burrows through, making it an extremely dangerous foe to fight against.

Christmas themed encounter in which the player characters have to save the medieval equivalent of Santa Claus and his Christmas elves from an oni looking to ruin the festivity. The adventurers can make use of the sleigh and its presents cannon during combat. After doing so, they are invited to save Jinglenight by using the magic sleigh.

A weird construct gets out of control during a festivity. Player characters need to confront the construct using the weird magic items originally planned for the festival to stop it before someone gets harmed or the festival is ruined. Expect all kinds of gnomic crazy inventions.

A mysterious fey totem appears in a roadway in the Feywild. It has many faces and seems to be abandoned or cleverly placed for some reason. Deciding to ignore the totem makes the player characters notice they are trapped in a looping roadway. The only way out is to interact with the weird and magical totem.

The ghost from an owlbear shows up in a town near the forest to massacre those in the streets during the night and bringing them towards the forest. The owlbear shows up continually, gathering more victims. The player characters are called by the mayor to investigate the mystery and put an end to it. This encounter works great as both a spooky and heartwarming story, and you can expect your player characters to end with an owlbear cub as a pet by the end of it.

Enter the mad wizard’s tower and confront one of its many traps! To keep going through the tower the player character need to win a combat while fighting on an always moving seesaw. The combat environment is made so the players need to position themselves carefully as they combat against mage guardians. Tactical thinking is needed to successfully pull off the encounter.

While sailing through the seas or skies a group of harpies attacks the player characters. These aren’t your typical harpies though. They are being leaded by an incredibly intelligent one that has a plan to destroy the ship or airship by using rust monsters that corrode the ship’s wood. Player characters are expected to plan carefully how they want to combat them as there are many ticking clocks in place.

In order to enter a sacred tomb, the player characters need to either solve the androsphinx’s puzzle or battle against it. The androsphinx is an extremely powerful and cunning foe that has no problem with fighting dirty to protect the tomb. Challenge your players with a puzzle or have them meet their doom.

Have the player characters confront a group of yetis or a roc while trying to reach a village traveling through the mountains. This encounter has plenty of combat possibilities, but it can all be evaded if the player characters manage to move stealthily or quickly. Finish the encounter with a sled race through the side of the mountain with the roc trying to catch them.

A bronze dragon wyrmling got cursed by a hag. Now the dragon continually kills all the fishes in a lake a near hamlet use to live. The people from the hamlet get in contact with the party and ask them to find out what is causing the fish to die in the lake. This encounter works great to introduce the players to underwater combat, fighting a dragon in its dangerous lair and giving them a rival to fight in some other future encounter or story arc.

This group of thieves has heard the tale of a magic lamp containing an entity capable of granting wishes. The thieves’ leader Amani Baba will go find it in this strange magical oasis that shows up every ten years, only to then disappear again. Give the characters the chance to approach this encounter in different ways, creating different results based in their decisions. Approaching the oasis by daylight creates a different encounter to getting there by nighttime. Time is running out and there is a genie to find.

A farming village is widely known for having farming animals of giant proportions. Every year they make a competition to have more tourists in which famous adventurers take place to compete against each other to kill the most giant turkeys. Have your player characters meet some giant animals in this carnival-like event, compete against rival adventurers and defeat giant animals, including some elemental ones, all while the place is filled with wild magic. Chaos is sure to ensue.

Help Ringo, one of the Jinglemas gnomes, find a great place for them to get ready for the next Jinglemas. A giant ice castle seems like the perfect place, and those in it are willing to leave in exchange of a favor. The problem is they are frost giants, dozens of them. The giant leader wants the adventurers to help rescue his son from a place they can’t get in in the castle. Face waves of undead and accomplish the mission to have the giants leave the place.

You and your group of adventurers are put in command of finding Whitefang, the powerful albino crocodile that is terrorizing the city’s sewer system. The adventurers are no more than a chess movement in the great game the city watch has planned. In the sewers is where the Thieves’ Guild is located. In order to put an end to them, the legendary killer croc must die so the investigation in the sewers can go on. Crawl through the sewers and confront thieves and crocodiles until you find what you are looking for, and put an end to it.

Traveling to a wizard tower located in the middle of the forest you encounter a group of dryads. These dryads didn’t come for fun and games. They are looking for revenge, and you are stepping in their way. The dryad Aria lost the thing she cared most about: her tree. Now, her mind is corrupted by darkness and she only yearns for the destruction of those outsiders to the forest. Battle against an entire conclave from this fey-touched forest or fall prey to a quick sand pit.

The big brother of a sea dwarf druid asks him to awaken some of his friendly marine creatures. Once this is done, the young sea dwarf plans out a trap to capture evildoers and capture them vigilante-style. The players’ party encounters a treasure chest laying in the middle of the ocean. Will they fall into this sea dwarf and his awakened giant octopus and killer whales’ trap?

A group of death domain clerics hide their knowledge by sharing it with dragonborns. These dragonborns are then killed and mummified, having them rest in the middle of the desert in a place these clerics can come back to in order to raise the mummies and have them tell the piece of lore to them.  One of the spirits from these corpses left his body before being mummified. It now roams the desert waiting for a group of adventurers that can help him go to the afterlife by removing this dark magic.

A giant honeycomb appeared next to a forest tied to the Feywild. Its honey has an allure that made a goblin boss become obsessed with it. This goblin now protects this honeycomb and has its raid group attack nearby villages mounting giant bees. Enter the goblin base and kill everything in your path or sneak in to destroy their plans! How can the adventurers put an end to this flying raid group and what will they do with the magic honey if they get hold of it?