Tips and Rules for Gambling 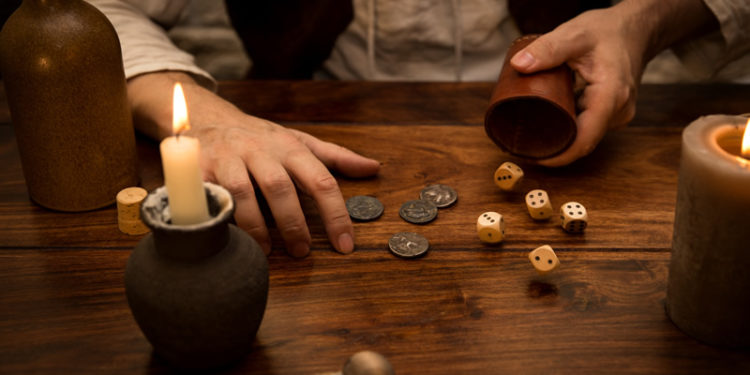 The following are some tips and rules for running a gambling session. Gambling can be fun and found in a variety of formats in campaign worlds. This article provides quick tips and four detailed options to get you started running games of chance for your players. You’ll find a mix of info for running games in casinos, taverns, and back alleys. You’ll also notice that these games have a nautical theme, but this can easily be changed.

This casino game features a large ship’s wheel with twenty spokes sitting horizontal on a table. Each of the spokes are numbered one to twenty and colored black (odd) or white (even). The table around the wheel provides places for six gamblers to sit.

To wager on Captain’s Wheel a player chooses one of the following betting options based on where they believe the wheel will stop:

A croupier (or dealer) accepts wagers from the six gamblers and appoints one of them to be the captain who spin the wheel (rolling a d20). The captain position generally rotates through each of the six gamblers. The wheel is spun and whichever spoke that the spin settles on is the winning number and color. Fortana’s Wheel pays out as follows:

This is a game only found in finest casinos where four giant sea horses race around a massive pool with seating surrounding it. Change this to horses, griffons, fairy dragons, or whatever fits your world.

Each of the sea horse racers is controlled by a jockey. Gamblers bet on which seahorse will win a race to complete a circuit around the 250 yard pool.

Complete the following before each race begins:

A race around the pool generally takes around a minute to complete. To run the race you will need to roll 1d4 and add it to the left odds number for each sea horse four times. For a racer with 3:1 odds, you would roll 1d4+3 each round. After each round describe who is winning and losing. After four rounds, the sea horse with the lowest roll total will end up the winner.

To determine the payout for each winner simply pay anyone who picked the winning racer the amount you set for that sea horse’s odds. On a bet of 10 gp for a sea horse with 3:1 odds, the player would receive 30gp. If you are familiar with horse racing, you can provide your players with greater betting options such as place, show, or even box bets.

This dice game is popular in both the back alleys of port cities and at the casino. This simple game is played with dice made of bone, with the side with a single pip (or dot) representing the skull. The goal of the game is to roll as many skulls (or ones) as you can in three chances.

To make a wager on a game of skulls, a player places a wager, usually set by a croupier (or dealer). The player rolls three dice (rolling 3d6). Skulls pays out as follows:

Wagers at the casino tend to be much larger, with gamblers far less likely to end up dead for rolling triple skulls.

The nautical themed sloops (type of ship) and sailors can be changed to anything that fits your world. In Vodari, this is a popular card game played most often for drinks or small wagers in taverns by a group of two to six. Hands are dealt out to players until the groups tires of the game or most of them run out of money to bet.

The goal of the game is to get the highest five card hand, with cards ranging from Ace (1) to 10. Here is a list of the hands ordered highest to lowest:

Each round of involves the following:

The winner of the hand collects the total from the pot and a new round can begin, shifting the dealer to the left.

Looking to outfit your cheaters with some gear? Check out these two gaming set options:

Dice Set, Loaded (5 gp). These weighted dice are well made and provide you with advantage on checks made for rolling these dice. A successful DC 15 Intelligence (Investigation) check will reveal that these dice are weighted.

Playing Card Set, Marked (5 gp). These cards have been expertly bent, colored, or scratched to allow you to know what’s on the front of the card by viewing the mark on the back. A successful DC 15 Intelligence (Investigation) check will reveal that these cards are marked.

Craft of the game: Creating a Minimum ...