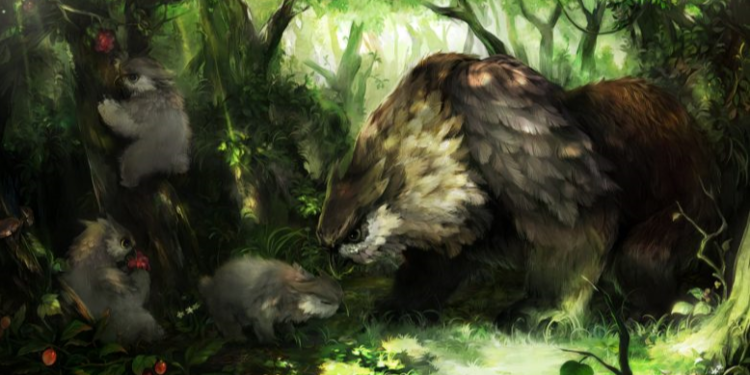 Due to continuous rainy days, all crops and vegetables from Yellowbridge Village ended up drowning. After several requests for supplies to the crown, the townspeople realized they were of no interest to the nobles and decided to go back to the old ways and hunt for food in the forest. That’s when a hunting group was formed and killed some beasts for the whole village to survive during this terrible weather they were living in. One of their prey was an owlbear, who fiercely protected its three cubs until its last breath. The baby owlbears were not seen and remained hidden in the forest.

It was a week later that the owlbear’s fury manifested itself back as an undead specter to keep protecting their cubs and take revenge. Once or twice per day, the spiritual owlbear would arrive at Yellowbridge Village to kill one or two civilians and run back. Townspeople are scared of the creature as their weapons seem to go through it, leaving no scar. They are looking for a group of adventurers to put an end to this. 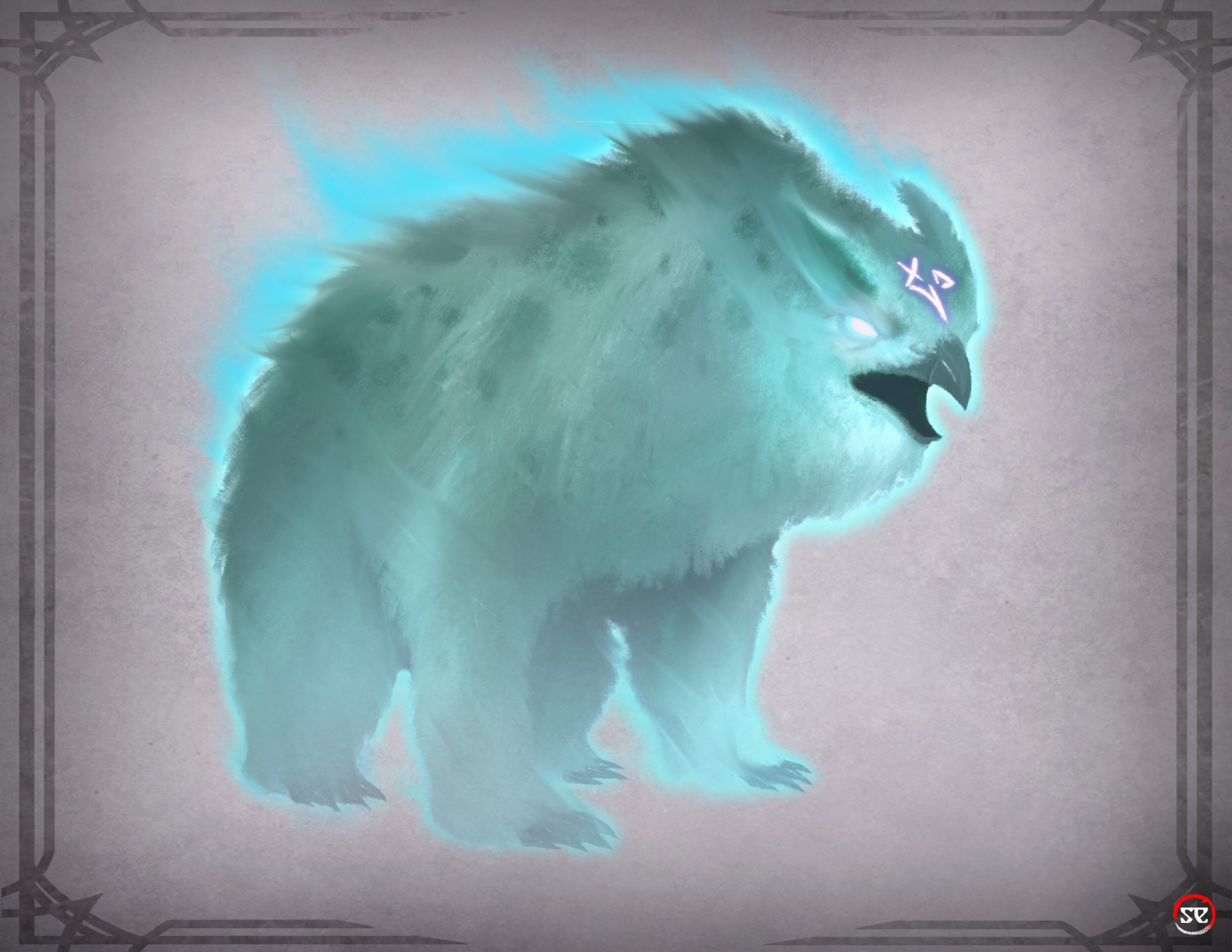 The player characters arrive to Yellowbridge Town after reading some plead for help in another city’s notice board. The offered reward is 500gp and 20 days worth of rations. When the characters first arrive to the village they will be guided to the mayor’s office to receive all the necessary information.

On its way there, the player characters may gain information asking for rumors of what’s going on by making a DC13 Charisma (Persuasion), or eavesdropping conversations with a DC13 Wisdom (Perception) check. For each check they succeed in they gain one of the following rumors:

Gregorius (human) is the city major. His looks make him seem more like a peasant than a person of wealth. He stresses over the simplest of things but ends up solving what he puts his mind on. He is being blackmailed by a group of nearby cultists making most of his income go for something the cultists are making that he does not know. A DC18 Charisma (Persuasion) or  DC18 Charisma (Intimidation) makes him spill the beans, but will reassure the PCs that it is a trouble to be solved at a later date.

The mayor will ask the PCs for help getting rid of the spiritual owlbear that comes every day to kill some people in town at random times. He will grant them a reward obtained through the hard work of all of Yellowbridge’s folk. He has no clue why the owlbear started appearing, nor how to properly kill it. One hunter, as well as another adventuring group, have gone some days ago, but they have not come back. The mayor believes they either died or decided not to continue with the mission.

Players can decide to go look for the creature in the forest or wait for it to appear in town. The mayor does not want to do the latter and will try to convince the PCs to go search for the owlbear. A DC15 (Persuasion) or  DC15 Charisma (Intimidation) check can convince him otherwise. If this was the case, the mayor will have some people ready to help them in battle.

Search the forest for the owlbear

If the players decide to go search for the spiritual owlbear they need to decide if they are going to approach their search from the eastern, western or northern side of the forest, as it goes around the whole village. The owlbear rests on the forest’s northern area, taking care of its cubs.

Choosing the eastern or western area to start tracking the beast: Players must succeed on a DC14 Wisdom (Survival) check to track the spiritual owlbear to the northern region. Failing the check means the characters will track a wrong trail for 4 hours, only to find three cave bears (one of them is hurt with an arrow on its side and has half its hp: 21).

Starting the tracking in the northern area or reaching it from one of the other sides: Players must succeed on a DC14 Wisdom (Survival) check to find the way to the spiritual owlbear’s den. Corpses and scratch marks on the trees will mean they are on the correct path. Failing the check means the adventurers will get lost for 4 hours. Succeeding, on the other hand, leads the player characters to continue until they reach their destination. There is a 50% chance they encounter 2 owlbears along the way.

When they finally get there, read the following text:

In the depth of the forest, surrounded by numerous trees, the phantasmal figure of the spiritual owlbear shines while remaining seated next to the biggest tree. Its eyes gleam with a red energy, looking and smelling from side to side, all while remaining in place. It seems to be taking guard, perceiving nearby creatures with its smell.

Use the spiritual owlbear stat block below for the fight.

Waiting for the owlbear on Yellowbridge Village

The mayor brings 2 scouts and 3 commoners to help the PCs hunt the spiritual beast down. The scouts look ready for battle. The commoners, on the other hand, are using household items as weapons (no matter what they have as a weapon, use the Club attack as they are not proficient with anything). There is a 50% chance the spiritual owlbear arrives during the night. If that was the case, take Vision and Light rulings into consideration, as the place will be heavily obscured (the town isn’t illuminated during the night and there is a new moon in the sky).

When the spiritual owlbear does finally arrive, read aloud the following text:

Two shining red eyes finally loom from the northern forest section, surrounded by a light blue aura. The creature slowly stalks the village, smelling for prey. Voices begin to be heard from the different houses as the townspeople start hiding in their own homes. It is at 40 ft from your position that the spiritual owlbear finally lays eyes on you, and starts getting ready to charge.

The spiritual owlbear is a phantasmal killing machine, that is looking for revenge but knows when it can’t win a fight. It is extremely frenetic and knows how to position itself for a higher chance of survival. If any townspeople are at sight, the owlbear will focus its attacks on them at first until none remains. Only after that (or if they are not reachable), will the undead creature target the players. If they are fighting in the forest, the owlbear will target any creature that gets close to the great tree it was guarding, as its cubs are hidden in there. 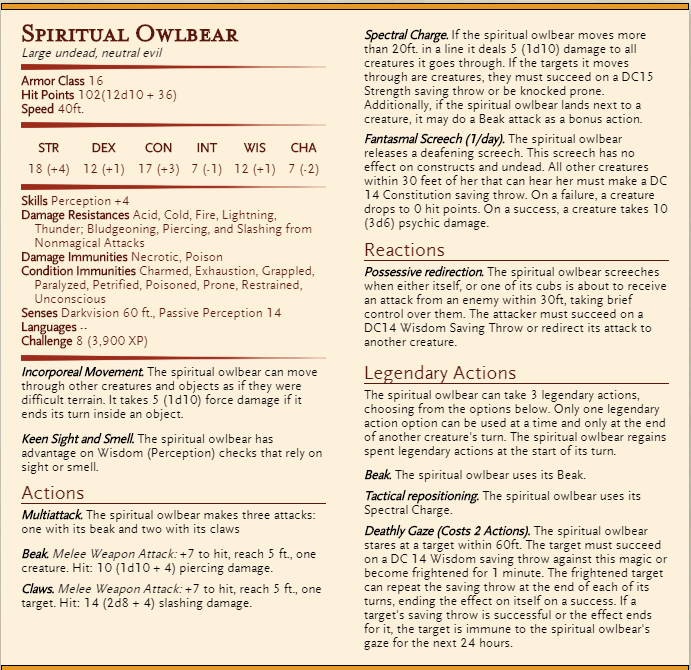 If the battle is taking place in the forest, add in numerous trees to the battle map, or take them into account if using Theatre of the Mind. Taking cover might be a vital aspect of this fight. If it is transcurring on Yellowbridge Village, have some carts and wood crates to work as obstacles. Have the townsfolk be scared enough of the spiritual beast to do rash actions, such as throwing their weapons or running away if they get damaged.

If the spiritual owlbear gets down to 20hp or less, it will attempt to run away towards the forest, having learned its lesson, to not be seen again.

If the battle took place in the forest, players will find 3 owlbear cubs inside a small cave in the big tree. Players may decide to adopt them or give them to the town to take care of. However, the townsfolk will only accept a maximum of two of them. Numerous bones are also scattered through the den, from previous adventurers that came before. One can easily find a medallion of thoughts, and a +1 elven shortsword. A DC15 Intelligence (Investigation) check also reveals an unharmed breastplate and 4 leather coin pouches that have a total of 90gp 104sp 166cp.

No matter the way the players took care of the spiritual owlbear, Gregorious will reward the adventurers as previously established, by giving them 500gp and 20 days worth of rations. However, if any of the townsfolk died at any point during the fight, the mayor will ask if the adventurers could donate 50gp per dead individual to cover for their funerals.

Five Magic Items for the Circle of ...