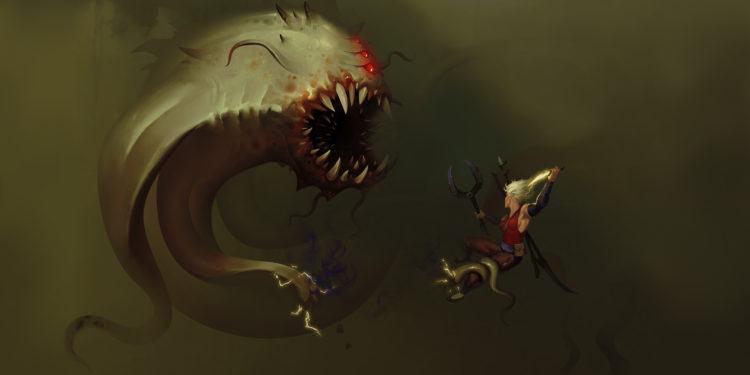 Aboleths are creatures that were in many ways inspired by the Cthulu Mythos from HP Lovecraft. They are awesome Great Old Ones that predate gods themselves. However, they are highly situational enemies as most adventures occur in land. So, when I found out this new Ghosts of Saltmarsh adventure didn’t have an Aboleth in it I thought why not make a separate mini-adventure with one in it? That’s how my idea for this post came to be. There were also some aspects from the lair itself I wanted to fully explode which I will explain as I mention them.

Before you go on, why not see some of the other articles I wrote with the Ghosts of Saltmarsh and the Seas of Vodari supplements in mind?

It’s highly recommended to do this with players you know from some time and might have fun playing as a double agent. Some people won’t want to put their party (and character) at risk for the sake of good roleplay. As the Aboleth can mind-control player characters I can’t recommend enough using this ability on those you can trust will not ruin the experience.

Aboleths, surprisingly, are strong as well as intelligent. Therefore they are able to plan machiavellian perfect plans while pulling some punches. What this means is that you will want to only use their physical actions during combat without wasting them enslaving your targets. For this to happen, some players will need to become enslaved before combat arises. 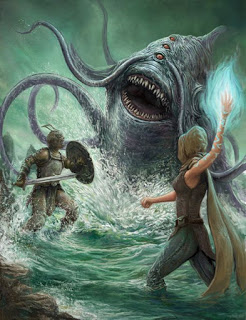 Have your players go through many rooms before reaching the room the final fight will ensue in. In these, leave water pools on the floor interconnected through underground tunnels. This is where the Aboleth will come from to use its Enslave ability when no one is watching. Make the player roll the Wisdom Save. If they fail, then pass a note or send a phone message saying they are now enslaved by the Aboleth but must remain behaving normally until told otherwise. In order for you to have your players not knowing what is going on, make the Aboleth act when they are reading some inscriptions, fighting monsters or looking at a mural. This way, they will think the effect from the saving throw comes from there. If everything goes accordingly you may have up to three players on your side by the time they reach the final boss.

As I said before, Aboleths are super intelligent beings and can understand their targets by only seeing them. Consequently, they should only target characters with low wisdom or potential damage dealers, preferably ranged characters. Tanks are of no use as being hit might remove the effect. Neither should other mind-controlled monsters in the way to the final boss hit enslaved player characters so as not to ruin the plan. Try not making it too obvious. This way the big reveal of having some players playing double agents will have a greater impact. 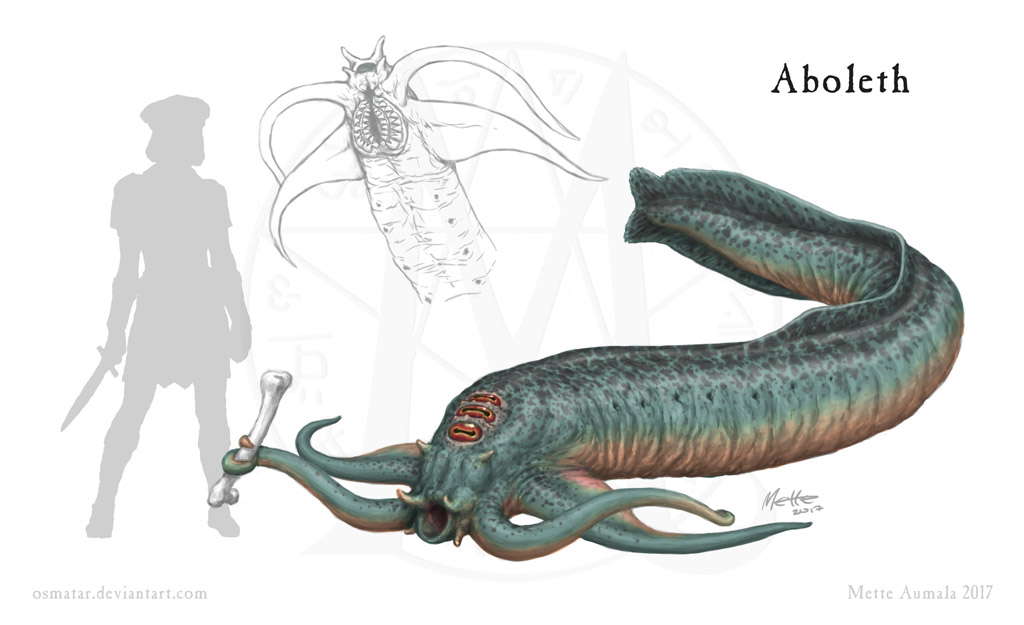 Use darkness to your advantage

Most player characters do have darkvision. However, their senses don’t go further than 60 ft from them, making them blind to whatever lies beyond that range. Aboleths, on the other hand, can see up to 120ft in the dark, so why not make use of this ability?

Have this Great Old One come out from the water pools when they are leaving a room. This way, the Aboleth can understand their greater desires with one of its abilities and use them to its advantage by manipulating the party through telepathic means. Unfortunately, for balancing measures I suppose, the game designers decided to make its Enslave ability with a range of 30ft. As if this was not enough, its Dexterity (and therefore Stealth) is garbage, meaning almost every time it comes out from those water pools it is going to be heard.

You can always change its Enslave range to work up to 120ft, but leaving it this way and letting the players know something is out there giving them chase can be very terrifying. Play with that aspect of the creature and you can create a very Lovecraftian scenario. Just don’t make the Aboleth start a fight if discovered unless it has a great advantage over the players at that moment (having 3 or at least half the party mind-controlled and making they battle underwater). If even one of those things is not in its favor, the Aboleth should run away. It’s got plenty of time to turn the tide up to its side (see what I did there?). 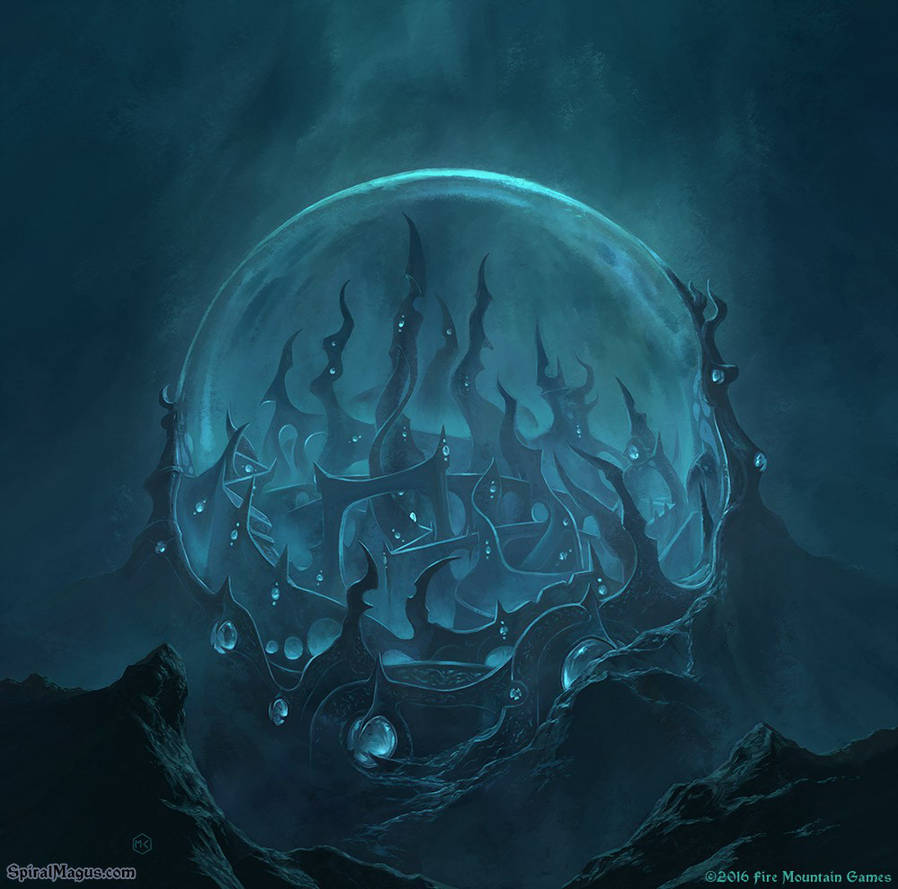 By the time the party reached this place, they should have fought a great variety of mind-controlled monsters and their hit points have been reduced a bunch (or lots of spell slots wasted). Now if I was the DM running this, I might change this room for the one in The Real Boss Fight if they have already seen the Aboleth while getting to here. This room is supposed to trick your players into thinking they will fight the final boss in here, and if they are already sure the Aboleth is going to come next, then they will save their hit points and spell slots for the next battle, which is what we are trying to avoid.

Again, don’t ever prioritize attacking enslaved player characters over the other ones. Due to the Aboleth’s telepathic bond with any enslaved creature no matter the distance, this makes perfect sense. Even the dumbest enemies should act intelligently while under the sway of this creature.

Make one big enemy appear, such as a Troll modified in a way for it to look aquatic in nature or maybe a sea hag. No matter what you choose, max up their hit points so it can resist a few rounds. By the end of the first turn of combat, make minions appear from water pools in the room to catch the players off guard. Merfolk do just nice for this. 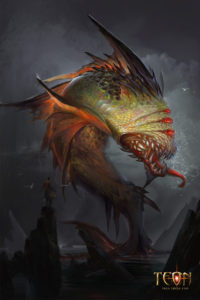 All right, time for the real battle. If the players did fight the encounter mentioned above, make one of the enslaved characters “notice” a secret room they almost passed without noticing. There should be a big room with many water pools separated from one another.

The thought process behind this room is for the Aboleth to be able to traverse from one side of the room to another by swimming through underwater tunnels. If the PCs decide to submerge into the water tunnels to fight it we will need to make use of an extra ability I decided to add to the Aboleth. I wanted it to be able to make jumps from one side of the room to the other, in order to come out from one water pool and submerge into another one. It should cost it 10ft from its swimming speed to do this to keep it more or less balanced.

Why would I go all the way creating an extra ability when the Aboleth could perfectly wait for them to start a fully underwater combat? I wanted to make use of the tentacles’ reach. By making the tunnels small enough, if someone desires to follow the Aboleth, that character will be attacked from a safe distance and escape without generating attacks of opportunity. Its swimming speed will always make it faster than Player Characters while in water.

Wait for some PC to go chase the Aboleth. When that moment does come, players out of the water will be at a disadvantage against their enslaved companions. If done correctly, this plan can be extremely harsh and cause TPKs, so be warned. However, with such a mastermind of a monster, I think it fits it perfectly. If the plan fails and the Aboleth is reduced to half health, make it retreat through an escape tunnel. Even though they don’t truly die when left with 0 hp I wouldn’t consider this one a creature that would fight to the death.

Want the fight to be even harsher? Have Swarms of Quippers in the water tunnels, ready to attack whenever a player tries to chase the Aboleth.

Aboleths can be nasty creatures if used properly. Thus, they should not be underappreciated. Terrify your players with this creature and give them an encounter they will not forget for a long time!

Did you like this ‘Let’s create a Monster Lair’ article? Would you like me to do one about some other monster? Would you rather have me turn this encounter into an entire fully-fledged one-shot? Let me know in the comments below!

Are you running out of time just before the final boss? Then maybe it’s time for a cliffhanger! Check this post to learn more about how to finish your session with an exciting one!