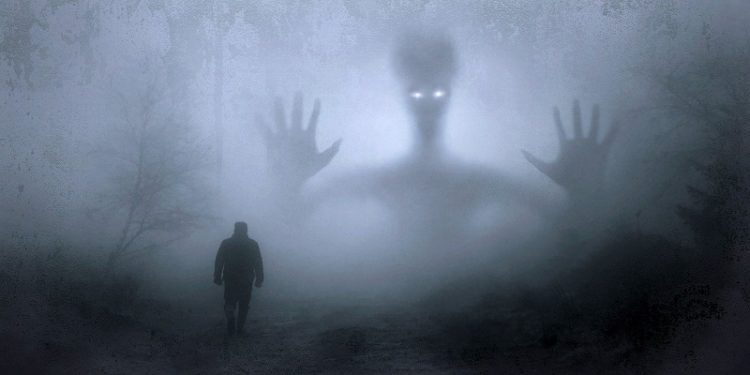 Riddle:
It cannot be seen, cannot be felt,
Cannot be heard, cannot be smelt.
It lies behind stars and under hills,
And empty holes it fills.
It comes first and follows after,
Ends life, kills laughter.
What is it?
Answer: Darkness

The shadow pact is a warlock pact with an infinitely old entity known as the Endless Dark. Before anything existed, it was all there was. Anywhere where there is darkness, its presence can be felt. Its sole goal is to create distrust and spread disaster, biding its time until everything returns to nothingness and blackness.

Note: this going with RAW that says that the warlock can draw spells from any list. The following list is what would be considered an “Ideal” list, (at least according to this author).

You are granted the following ability, which don’t count against your normal limit

Anyone who accepts this pact has ebony black skin and hair, as well as pupil-less black eyes; this is the Endless Dark’s way of marking his followers. Those unfamiliar with the character may feel uncomfortable around them, due to their unnatural appearance. NPCs meeting the character for the first time are off-put by their appearance and have disadvantage for Cha.

Starting at 1st level, you can invoke the Endless Dark’s power to protect you from harm. As a bonus action, you create a whirling area of shadows and darkness that swirls around you, but do not hinder your sight. Until the end of your next turn, you gain resistance to all damage, and if a hostile creature ends its turn within 10 feet of you, it takes necrotic damage equal to your warlock level + your Charisma modifier.

Once you use this feature, you can’t use it again until you finish a short or long rest.

At 3rd level, a character dedicated to the Endless Dark gains the following Pact Boon: Minor Displacement. The Minor Armor of Shadows upgrades to a full Armor of Shadows and now takes the form of a garment, specifically a cloak and acts as to displace its user for a number of rounds equal to one half your warlock level + Cha modifier, rounded down, minimum 1. These rounds do not need to be continuous and can be turned on as a bonus action and off without using an action.

Starting at 6th level, as a reaction when you take damage, you can cast Darkness centered on a point within 5 feet  of you and are able to teleport to another area of shadows or darkness within 30 feet, if desired. In all other respects, treat this ability as if the character had used Misty Step. The area of darkness lasts until the end of your next turn, and it has no effect on your vision.

Once you use this feature, you can’t use it again until you finish a short or long rest.

At level 14 you can assume the form of a shadow for a number of turns equal to one third your warlock level + Cha modifier, rounded down. You can squeeze through gaps as little as one inch (1”), and if you turn sideways you have no thickness. You treat all areas in deep shadow or darkness as if they were level ground. This works as if the character were under the spider climb spell. Unlike the “normal” undead version of shadows, you aren’t susceptible to the “turn undead,” but do take double damage from radiant sources. You also have disadvantage on all rolls while in an area of the Sunburst spell. Any attacks you make, invocations you use, or spells you cast are counted as doing necrotic damage.

I was looking to create a pact that was able to control the battlefield with darkness, damaging enemies with psychic and necrotic damage. See below for a sample character using this pact and warlock patron.

Riddle:
The more there is, the less you see. What is it?
Answer: Darkness

Mobile   Speed increases by ten feet; difficult terrain does not interfere with dash, making melee attack does not provoke opportunity attack from that creature

Personality Trait: I stare off into space when I remember something about my past.

Onyx ‘s Ideal(s): Improvement. “In order for me to be better in the future, I must know about my past.”

Onyx ‘s Bond(s): I am being hunted down for the crimes I committed while being used by the Endless Dark. I must escape in order to enact my revenge.

Onyx ‘s Flaw(s): I let the darkness overtake me. Never again can I let down my guard

Feature: Inklings of the Past

Whether it has to do with your forgotten life or simply trying to make up for lost time, you find yourself to be adept at picking things up, learning quickly and finding you have a great memory for detail.  Additionally, you occasionally find yourself in possession of odd bits of information or you recognize something that you shouldn’t. Perhaps a name/person seems very familiar or untrustworthy, you know you should turn left here rather than right, or you’re quite certain owlbears do not usually hunt in packs as your companions are insisting.

Onyx Blackstone was not his original name. Who he was has been lost to The Endless Dark. He was an ordinary thief who was caught by the city guard and was about to be put to death for his crimes. As he sat in his jail cell, awaiting his execution, he heard a voice that asked him, “Do you want your freedom?”

Curious, he asked the voice, “What do you mean, ‘do I want to my freedom’ Of course, I want to be free! Exactly who are you to offer this?”

The voice said, “I am an entity known as the Endless Dark. I offer deals in exchange for power. My deal is simple: give me your body to do as I please. You will get your wish.”

Onyx said, “Do as you wish.” As he said this, he felt his body being changed as it was dragged through the shadows, and an evil, maniacal laughter followed. This is the last thing he remembered until he awoke.

When he came to, he was at the edge of the hamlet where he was going to be put to death. The entire city was burning, and he was covered with blood. Stumbling away he sought to find out what happened that night,