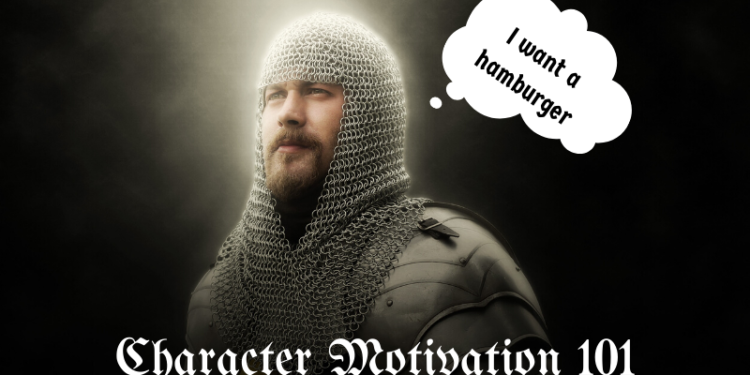 Great characters, whether in fiction or in Dungeons & Dragons, act and make decisions based on a central need, or want. This is your motivation. It is a goal that pushes your character forward in their story. It is central to each decision your character makes and should be front of mind during a play session.

Let’s take a look at how to develop your character motivation and how to then use that in a session.

Your backstory should provide enough detail that you have a solid grasp on what your character wants. This want should flow from previous events in their lives.

The question “Why?” is your friend here.

Say you know that you want to play a barbarian and that you think a Dragonborn would be cool to play as. You write the backstory fleshing out their family, their friends, their hopes and dreams, but when it comes to making a motivation, you’ve got to find the core reason for their past (and future) actions.

The easiest place to start is to ask why did they become their character class? Let’s use this dragonborn character as an example:

Q: Why did they become a barbarian?

A: To channel their rage

Q: Why do they need to channel their rage?

A: They are afraid of hurting their clan.

Q: Why are they afraid of hurting their clan?

A: Because they want their clan to accept them.

There you go, a seed of a motivation. Things like acceptance, love, peace, wealth, these are all great states for your character to pursue, but a motivation of “I want to be accepted” gives you nothing to act on.

Center on the Action

With some core desires from your backstory, let’s transform them into actionable motivations. It is important to use action verbs (fetch, take, push, combine, discover) over stative verbs(be, want, have, obtain) because it’s way easier to play the action over the state.

So you know what your character wants (peace, love, acceptance, power) and now is when you ask, “What will I do to get it?”.

Wizards might try to find a legendary 10th level spell to gain true power, fighters might want to claim a title to prove themselves to worthy of their family’s love, rogues might build a thieves guild to ensure they are never alone again.

Whatever you choose, use verbs that speak to you and excite you. You can have more than one, but when doing so, assign them importance with one being the most important thing to your character and the others being less so.

With your motivation in hand, use that to inform and direct your choices. Having a strong motivation can tip your character to use the cursed sword or throw it away, depending on what they want and what they are willing to do to get it.

Perhaps your half-elven sorcerer wants to discover the true identity of their father so they can finally feel like an insider, but that gets thrown into conflict when they are faced with a choice of saving a criminal who has a lead on their father or condemning him (and his information about their father) to death and oblivion.

People change and are complex and many-faceted. Your characters can be too! If your character achieves what they want in the course of play, feel free to develop a new motivation, or bump an ancillary motivation to become a primary one.

And if you, the player, are no longer interested in a motivation you made during character creation, feel free to set it aside and develop a new primary one. After all, we’re playing a game!

Have fun and explore not only the rich fantasy of the game world but the rich inner world of your character!

Using Tattoos in Your Game, P3