Brief description of Races & Subraces (Ideal to Show to your Players), Part 2 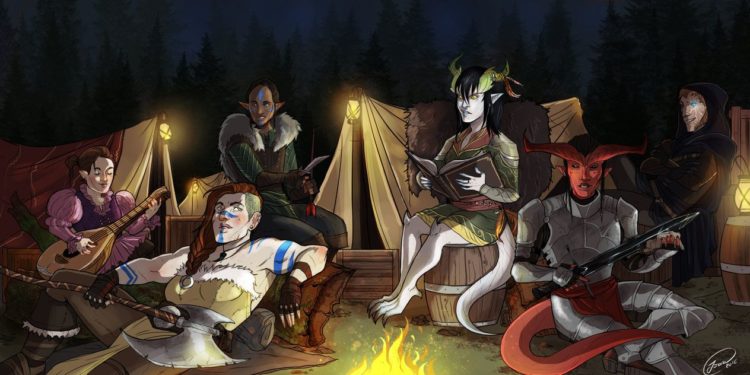 You’ve just got your class and subclass decided after taking a look at my previous posts BRIEF DESCRIPTION OF CLASSES AND SUBCLASSES, now it’s about time you choose a race for your game!

Most of these classes have these descriptions only when found in the Forgotten Realms Setting (Or whichever setting I specify). Take into account that their attitudes, places to be found, etc. may vary if played in a homebrew or different setting than the one listed here. However, the races tend to act or think in a similar manner, such as elves and their love connection to nature, or dwarves and their love to build stuff. I hope this can give you a general idea of which race you want to play.

Play a race because you like it, and alter it as much as you like and your DM allows it. Don’t be scared to try something different. Do you want to play a barbarian elf? That seems weird, but you can surely come up with a good enough reason for your character to have decided that path.

Without further ado, here are the official D&D 5e races:

These bird people look at the world from up high. They don’t usually dwell in land indifferent from the stuff that happen there, unless something happens making them have to go in an adventure. They believe they were born to fulfill a greater purpose. Besides flying with their wings, they can attack with their talons.

Bearers of divine souls, most aasimars act as champions from the Celestial gods. They are mostly human, and can normally be confused as one. Because of their nature, they might call the attention of cultists and enemies of good. Aasimars tend to be charismatic beings, but like keeping a low profile.

Charged with the power of good to protect the young and weak, in order to defeat darkness.

Charged with divine energy, they have a powerful desire to extinguish evil from existence.

An Aasimar that for some reason was touched by dark powers or turned evil, capable of turning itself into a fearsome creature.

Born for battle and mayhem, these goblins’ cousins tend to be leaders between goblinoids as they love bullying the weak and despise being bossed around. They only follow orders from those who promise them great things. Surprisingly stealthy taking into account how strong they are.

Firbolgs are large (even though his Size says it is Medium), furry creatures. They often work as humble guardians of the forests, living a peaceful life around animals while casting spells from nature at will. They mostly don’t leave their homes, so if you see one of them circling the streets or roads, you can be sure it has a really good reason to be there.

Genasi are people who have an inheritance from nature and the elements. They look human-like, except for their weird skin colors depending from which elemental being they are descendants of.

Descended from the djinns, they are changeable like the weather, with light blue skin.

Descended from the dao, they are hardy and strong beings, usually with a metallic or rocky skin.

Descended from the efreet, they are very volatile and impatient, with flaming red, coal- black, or ash-gray skin tones.

Descended from wáter elemental beings, they are independent and calm, with a blue or green skin.

Goblins don’t usually go alone as their strength is only found when in number. Normally malicious and cave wanderers, waiting for an instruction to be given to raid the nearest town.

Goliaths live in tribes mostly in the mountains, recluded from the rest of the world. Taller than most humanoids, as well as muscular and sturdy, they spend their days mostly trying to get the necessary things for their tribe to survive. Were they to become useless to their group, they would get exiled or left on their own in order to die alone. Goliaths love combat and are always looking for a more formidable foe than the ones they have defeated, often making their lives shorter than normal as they end up fighting until death.

Giths are creatures that live in outer plains, bearers of psionic powers granted to them when enslaved and experimented by the mind flayers. When freed from their clutches, their ways of thought and made them divide in two bands:

Lead by the Lich Queen, they’ve become great warriors and raiders. After leaving and becoming free from the mind flayers’ sway, they needed someone else to serve, deciding to stick with this Lich. Are they to bring treasures and corpses from their raids they will be highly rewarded.

Githzerai decided to direct their fury towards mind flayers. That’s why, after finding and creating a peaceful place to live, they decided to start a hunt for them, to fully extinguish them and save those who suffered in their stead.

Leading over most of their goblinoids cousins, hobgoblins always think 2 or 3 steps ahead of them. They are trained in their tribes to think in a strategic and military way, but their actions are mostly inclined towards evil.

Having lost their wings due to some ancestor’s mistake making the entire race to become cursed, kenkus dream of getting back their lost ability. They can’t speak, but are able to perfectly mimic words or noises they once heard.

Weak and scaredy-cats, kobolds rely in the strength of union and normally follow some master’s plans, not knowing properly how to act on their own. They are excellent scavengers like their dragon cousins but lack their fearsome presence due to their look and short size.

These alien creatures look just how a lizard would look like if they could stand on their back feet, and were larger than humans. They are cold and calculating, with a mind only caring for survival, and extremely dangerous when angered.

A Guide to Roleplaying Lizardfolk >

Leaded by their lust for slaughter due to their god’s commands, orcs are great raiders and destroyers. Their strength and sturdiness allows them to be feared by their despised enemies: the elves.

Tabaxi are cat-like humanoids who usually live as outcasts, travelling from one place to another. They love talking about their past stories and do mostly everything you would expect a cat to do. They are very quick and charismatic.

Adventurers at heart, tortles leave their home at an early age to look for stories to create. Their objective in life is to find and do great things to tell to their children before passing away. For many, they live an exhausting life, but for them it’s just everyday things.

These noble champions are the ones that protect the surface folk from the ones beneath the waves, without the land dwellers knowing of their existence. They usually are good people and know very little of what lies out of the water, as they don’t usually go for visits.

The more human-like type of Yuan-Ti, also known as snake people. They think of others as their puppets and have a really strong relationship with snakes, being able to communicate with them and give commands.

Centaurs love freedom and nature above all else. They live in communities or clans and can run at a greater speed than other races, able to charge and destroy those who dare stay in front of them.

Elephant-like creatures able to move like humans. They are super peaceful and respectful, as well as extremely loyal. However, don’t you dare ever anger a loxodon unless you want that ginormous creature to break you in half with its impressive rage.

Great fighters, strong and courageous beings. With the combination of their fury and tactician way of thought, they are formidable opponents or races to choose. Those horns are not for show; you know?

They are the Frankenstein monster of D&D. After being experimented on and given different animal parts in order to create “the perfect being”, this is the end result. Decide which things you want your character to be made from and depending on that will some of its abilities depend.

Vendalken are creatures that don’t believe in perfection, but are constantly trying to get as close as possible to it. They rejoice on trying to do so. They are extremely talkative and intelligent, but emotionless, always looking for more knowledge but not wanting to share it so freely.