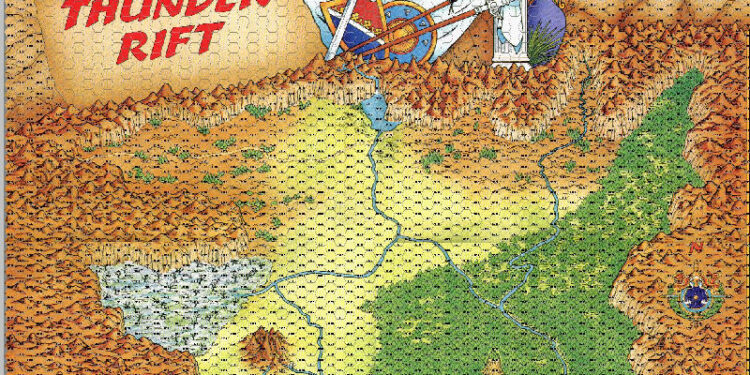 There’s been lots of excitement about old settings lately getting released for 5th edition. This week, we have a guest post from Mark Compton looking at the Thunder Rift setting.

While stumbling through the internet a few years back, I happened upon Tribality. More specifically I happened upon Shawn Ellsworth’s article about running a Nentir Vale campaign for 5th Edition. I was fascinated by the fact someone had taken a little-known campaign setting from a previous edition and provided a guide to convert it. Which reminded me of Thunder Rift.

Created in 1992 for 1st Edition by Colin McComb, Thunder Rift was an attempt to create a self-contained local with lots of room for adventures. TSR released several “adventure packs” which were all adventures set within the Rift. Thunder Rift has everything: marshes, hills, swamps, and a vast woodland forest. It’s a giant sandbox that was designed for beginning players and Dungeon Masters to play in.

Thunder Rift, as a setting, is a self-contained valley surrounded on all sides by sheer cliffs nearly half a mile high. There are only a few known exits out of the valley to the rest of the known world. The most wonderful part about Thunder Rift, is you can set it in any “Known World” you wish to. Greyhawk, Forgotten Realms, or a world of your own creation. It is much like Nentir Vale, in that it is a setting where there are very few settlements surrounded by a vast wilderness for players to explore, and for DMs to create new dungeons. Hordes of Goblins, Kobolds and Orcs roam the various hills. A band of bandits have a hidden base somewhere in the north of the valley.

WHY SHOULD I USE THUNDER RIFT FOR MY CAMPAIGN?

Thunder Rift is a great resource because:

SO, WHAT IS OUT THERE?

So, hopefully I’ve piqued your interest in the Thunder Rift setting. Now let’s take a look at what is available out there to help you run your campaign. Most of these items can be found online at places like Drivethrurpg, RPGG, Amazon and various other sites.

Of course, any adventure you as a DM can come up with can be set anywhere within Thunder Rift.

Like Nentir Vale, Thunder Rift is a world unto itself. It contains pretty much any terrain type an adventuring party (and Rangers) would want: barren rocky hills, sweeping grassland, mountains, lakes, rivers, swamps and forests. Only through exploration would anyone be able to learn about all the Rift has to offer. But exploration is dangerous and perilous. Take one wrong step, and you could find yourself at the bottom of the unexplained chasm in the Southern Grasslands.

In the end, Thunder Rift makes for an excellent setting for starting players and DMs alike, and allows you to build upon the general descriptions as you see fit to make it a world all your own.

Improvising and Adjusting to Character Decisions