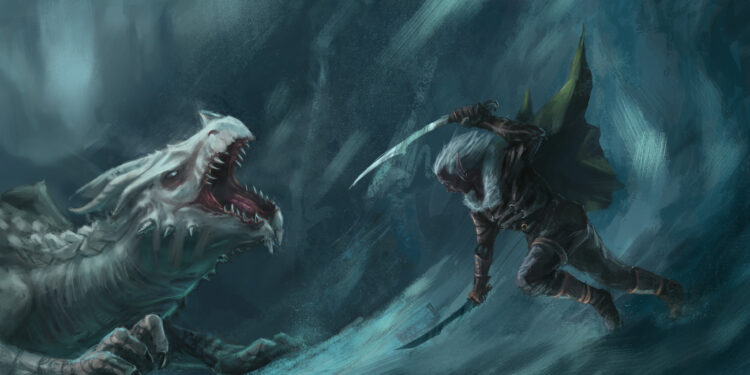 Now that Icewind Dale: Rime of the Frostmaiden has come out, you may want more encounters than the ones that already are in the book. This may also be useful for your tundra or freezing cold adventures in your own setting as most of what is in here is setting agnostic. The encounters were designed with the intention of feeling different for the most part and carry some story that can be woven into the storyline if the players are interested enough. There’s plenty of space to fill in the details and make them even more awesome, as well as to make them your own! Most of them carry a bit of a horror theme to play along with the WotC adventure, while others serve for comic relief or to encounter new places.

A shadowy humanoid shadow on a horse appears in the distance, followed by a group of other humanoids. The figure is a fallen paladin accompanied by 1d6 zombies and 1d6 skeletons. The fallen paladin’s eyes shine with a bright blue color.

The fallen paladin uses the champion stat block (VGtM) with the following changes:

A wooden cabin with no windows lies in the middle of nowhere. An extinguished campfire rests by the side of it, with about half a liter of blood spilled next to it over the snow. Inside the cabin, a bheur hag (VGtM) hides climbed on the ice-covered wall. The cabin is otherwise empty but for a hole in the middle of it connecting to a tunnel where dozens of skeletons lie. Right after the first PC comes in, the hag closes the door with the thaumaturgy spell and runs to cast arcane lock on it. If the hag manages to capture one or two pcs in her trap, she will continue to try to make a deal with them. The hag only yearns for the character’s suffering, but not necessarily their death. If the hag finds no way to reason with the PCs she will attempt to escape throwing spells as she runs. The tunnel contains a ring of fire resistance among all the corpses, as well as 267gp total.

The bheur hag is part of a bigger coven that terrorizes the inhabitants of the zone. She hates her “sisters” as she calls them. The bheur hag uses its usual stat block but can also cast the following two spells at will: thaumaturgy, arcane lock

1d4 frost giants have trained the same amount of remorhaz to serve as pets. They have tied chains to them and do some kind of water skiing to quickly move around the place, even going through the burrowed holes. The frost giants are still in their teenage phase and act selflessly. Roll on the following table to find out how they react upon seeing the PCs:

A yellow flag is seen nailed on the top of a nearby hill. The climb seems harsh but possible. Handle the climbing with some Strength (Athletics) and Dexterity (Athletics) checks as needed and reward the use of special climbing gear. The flag stands by itself on the top but it is nailed above a hidden chest. The chest contains a +2 Dagger with a blade that looks and feels like ice. The chest also contains 5 potions of climbing and a note written by a mysterious adventurer who tells that the dagger used to belong to Drizzt Do’ Urden. The note makes it seem like the writer is a huge fan of Drizzt and that wanted to reward those looking for adventures by leaving this chest behind.

Shouts originating from under the snow can barely be heard with a DC16 Wisdom (Perception) check. There’s a group of 4 hobgoblin scouts that got covered by snow with a blizzard and were about to die from hypothermia. The hobgoblins thank the PCs if rescued and can show them the way to a hobgoblin fort. If the PCs are guided there the hobgoblin tribe won’t like mere adventurers to be let in but may accept to hold a small ceremony for them for rescuing the scouts.

A hill giant got buried from toes to neck in the snow, in a way that only his head can be seen. It has tears frozen in his face that have damaged part of his skin. When he sees the player characters, he will shout at them for help “or else” trying to sound tough. If the PCs help him the hill giant will say that he could have maybe got freed on his own, but thanks them for the help. He will then proceed to accompany the characters to “repay his debt”. He doesn’t really know how much it would take to truly repay the PC’s help and is winging it, but won’t abandon the character until he does. He can easily be deceived to think that his debt isn’t still paid, but the moment he notices the PCs are just using him the hill giant gets mad against them.

A fisherwoman stands worried near a hole next to pond of frozen water. She asks the player characters for help as the keys to her home fell inside the pond. Characters who go underwater take one d6 cold damage per turn they are underwater (in the second turn they take 2d6 damage, 3d6 damage on the third…). There are three sahuagin underwater that took hold of the key and were expecting someone to come down to eat them. If the PCs help the fisherwoman she offers them to spend the night at her cottage.

A sunken frozen ship is stuck in a lake of frozen ice. The bow of the ship comes out from the ice with a hole in its side. PCs can go in and delve through it and its treasures. The ship got cursed by Auril (or some other god of the seas of cold) and all the ship’s crew live now as haunted ghosts in it. There are 10 ghosts total and one ghost captain.

The ghost captain uses the swashbuckler stat block with the Incorporeal movement resistances and immunities from the ghost stat block.

A flare is shot into the air, coming from the distance. A group of 5 firbolgs scouts walk aimlessly through the snow lost. Upon seeing the player characters, they ask to accompany them. The only thing they will share is that they got lost after a blizzard hit them. Actually, the firbolgs got an encounter with a blue slaad and one of them is incubating an egg without knowing. They are paranoid and will not answer much questions.

A white dragon burrows out of the ice below the player characters, looking for prey to hunt. The dragon starts chasing the PCs and will not stop until it kills at least one of them or it goes below 1/4 hp. Below the ice is its lair, where an immovable rod, a wand of magic missiles and 6d100gp 4d6x100sp 7d10x200cp. In order to decide which dragon appears, roll in the following table:

If you are looking for more encounters, maybe for your seafairing campaign in the Seas of Vodari, look no further than in one of my previous articles where I lay out 20 sea encounters.