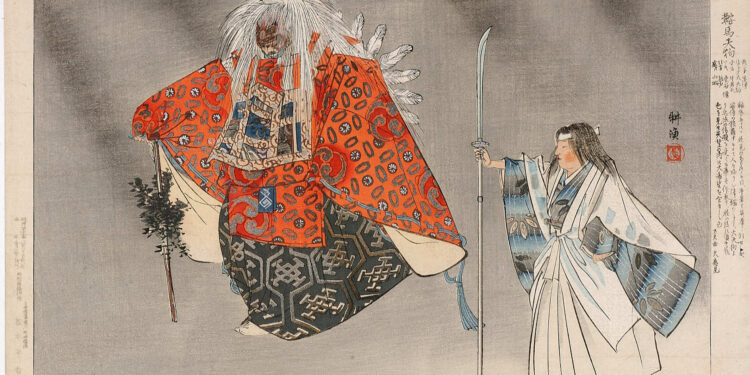 Like in the other worlds, Archfeys of this world are closest in terms of ranks and powers to mortals and some even used to be mortals. Many of them are considered to be Lesser Deities or Demi-Deities (some are Quasi-Deities who could not grant spells), which is not to say their power is to be taken lightly. In some way, mortals need to be most weary of these deities as they have the greatest likelihood of impacting mortal lives (and they do, more often in The Eight Isles where other realms are closer than in other parts of this world). Here are some notable number of them 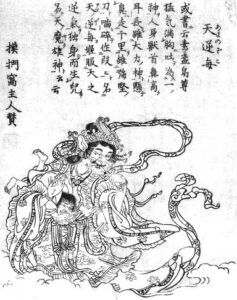 AMAZAKU: Goddess of Mischief. Said to be the mother of all Scarlet Tengu and queen of all Hags, Amazaku rules Winter Court with her bone chilling winds and dark magic. This mischievous Lesser Deity has never set a foot on ground nor uttered an honest truth.

UKALA: Goddess of Beasts. Ukala rules Spring Court, served by talking beats, chiefly the retinue of Spirit Foxes of great magics and tricks. This foxy Demi-Deity is one half of Udanala, a powerful Eladrin who’ve journey with Nigi-Misayus and ascended to godhood.

DAKINA: Goddess of Seduction. Dakina is the queen of Phantom Foxes who comes from her realm of Shadowfell to stalk humans. This malicious Demi-Deity is the other half of Udanala and has gone on to cause the fall of multiple dynasties and kingdoms of the Eastern Realms.

INAMI: God of Community. Inami is the lord of Autumn Court and father of all Spirit Racoon dogs (Tanuki) who have the long rivalry with the Spirit Foxes. This gracious Demi-Deity serve as their judge to and have 808 children spread across the Eight Isles

MIYAVI: Queen of the Summer Court, Miyavi was the first Arch Fey to help Nigi-Midayus and as such she enjoys some freedom from imperative

rules along with her consort Lord Enden. It is said that her dance could even bring out Sun itself from hiding.

ENDEN: Lord of Hunters, Enden rules Summer Court alongside Miyavi, He was the guide to Nigi-Midayus as the Angel tracked Ukushi. Though technically a Quasi-Deity, he holds great sway over Feywild which could extend to some of Winter Court’s territories.

ORULI: Goddess of Blizzard. Oruli is the queen of Snow Maidens that lures men into their icy death with their cold beauty – though some has mated with humans. This Lesser-Deity represents the deathly aspect of winter and mostly revered in the North of the Eight Isles. 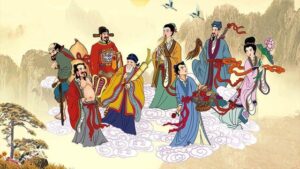 These Immortal Sages were the last of deities created by the Divine Pair and closer to Feys in terms of their relation to the mortals. They tend to be found in high mountains and distant islands or in the hidden depth of misty ravines where portals to other realms exist. There are Great Eight Sages that are well known and lives in outer planes. These are considered to be Demi-Deities but most Sages belongs to Quasi-Deity class. Though these sages could be of immense force, they rarely interact with mortals and prefer to reside half ways in other planes, often at the boarders of Feywild or Mount Celestia. This is partly attributed to the fact that the last time they got involved in mortal affairs, it resulted in fracturing of the Great Eight (listed below) and rise of a Dark Sage.

PHALAMUN: Generally considered to be the leader of The Great Eight, this four-armed satyr like sage symbolize wealth and light. This brown skinned sage rides golden Kirin across the sky above Mount Celestia as he trails flame. His artifact of power is Fan of Life Flame.

AZURYA: A disciple of Phalamun, this falcon-eyed Sage is known as a great warrior and a scholar who flies around with his blue flaming wings. This masculine sage is known to aid common folks suffering under evil rule, brandishing Sword of Heavenly Blaze, his artifact of power.

SEILU: This hermaphrodic sage with dragon-like horns and tail often appeared among the poor, leading them into song and dance. The wondering green-haired sage was nevertheless a great friend to Wugen, using their artifact of power Flower Basket of Blessings to aid in mortal conflicts.

WUGEN: The great general among the Immortal Sages, this turtle shelled sage is said to have taught Phalamun in the past. But when Orcs invaded, this humble sage sided with Dwarves, defying his disciple’s insistence on non-involvement, unleashing his artifact of power, Gourd of Soul Cycling.

XIEURA: Another of Phalamun’s disciple, the fierce beauty of crane wings and tiger tail is considered to be the youngest among the Great Eight.  This clairvoyant sage control metals with her artifact of power Flute of Earthly Brilliance, which she used to great effect in aiding Nigi-Midayus.

YISHANGY: Most lovely of the Great Eight, this pink-haired feminine sage with fox like tails said to have apprenticed under Wugen and Seilu. This airborne sage’s artifact of power Lotus of Fanciful Delight makes her one of the trickiest Sages, and one of the most influence among mortals.

QIHANI: This grandmothery sage and late recruit of Phalamun and Azurya is said to be the most noble of the Great Eight and would never be swayed from her justice. Her article of power Instrument of Thundering Judgement never strays from her marked targets.

ZHYNFU: This strangest of the sages are said to be the oldest of them (some say he is not truly a sage but a white bat of chaos flew in from Far Realms). Often seen riding paper mule, this whimsical sage wields Drum of Withering Fathom to transcend the line life and undeath.

These are the group of deities that was either born in darkness or strayed from the path of righteousness to become the cause of great destruction and suffering. They could range anywhere from Greater Deity to Lesser Deity and generally wield great influence upon the material plane through their worshippers, of which there are many. Here are some of the notable names. 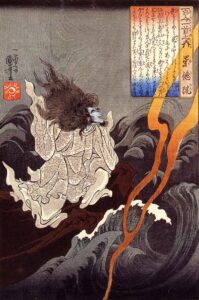 HAJUN: God of Defilement. More is said about this shape-changing shadow serpent in Dragons section. This Greater Deity is said to have eight heads, or avatars, each possessing powers that rival Intermediate to Lesser Deities, though the deity itself is sealed away.

HOROKIU: God of Terror. This material brethren to Hajun rules Nine Hells as it looks upon this world with its frozen red serpentine eye. This

Greater Deity uses his infernal agents to terrorize and unbalance material plane as well as other deities.

MIZ-SURITORA: God of Wrath. One of the newer deities, Miz-Suritora was a wronged angel emperor and a scholar of renown. After being deposed and disgraced, this former emperor ascended to Lesser Deity in the moment of extreme grudge and vengeance as he committed suicide.

QIYUU: God of War and Industry. Qiyuu is a proto elemental and giant-like Jaggernaut who were the rival of Emperor Dragon Mazuna. After his defeat, this ox headed and many armed Greater Deity with iron hide and flaming breath has vowed to wreak constant warfare among the mortals.

Below table shows the list of deities described above with their alignments, domain and symbols.