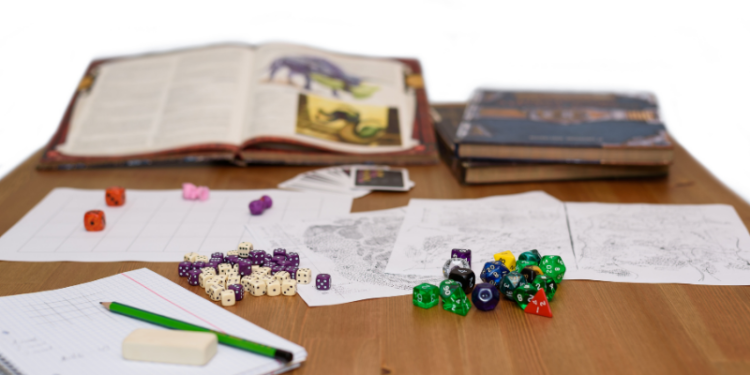 So, you have a bunch of friends who want to play Dungeons & Dragons but none of them have played before. You might consider running a one-shot meant to serve as a kind of tutorial. In the session, you’ll want to cover the three pillars of play, allow for the players to get used to playing a tabletop RPG and give them a sweet sweet victory.

Incorporating The Three Pillars of Play

When building the one-shot, you can base it on a loose story structure mirroring the heroes journey:

In each plot point, raise the stakes of the adventure and use it to introduce the three pillars of play. Each one should offer new ways for the players to interact with the game world and to learn how a tabletop RPG is distinct from a video game or another tabletop game: collaborative storytelling.

Mix in combat into the First Test, the Descent, and the Final Battle, but don’t have it dominate any one section. Combat is the most rules-intensive part of Dungeons & Dragons so it is easy for new players to get bogged down or overwhelmed with the question of “What do you do?” when it is the start of their turn.

Offer examples of how they can do more than swing a sword or cast a spell. Offer choices in the combat encounter beyond kill the dudes. What happens when a goblin begs for its life?

Use combat as a way to develop player skills, teamwork, and player imagination.

Part of the exploration in a tutorial one-shot is understanding how the players are responsible for their experience. Offer tips on how to think in character, how to get information through skill checks, and how to think creatively to use the world as described by the Dungeon Master to create a session of play. Exploration can be a great opportunity to open the world up beyond the stats on a sheet of paper and make it feel real.

Roleplay may be the most intimidating part of Dungeons & Dragons for those new players who think that to roleplay you have to act. These things are distinct from each other, though the skills are transferable. Encourage players to roleplay how they feel comfortable.

Some players may love the experience of getting into character, while others may prefer to describe their character’s actions in the third person. Both are valid and fun ways to play.

Entice the players to immerse themselves in the world by giving them stakes to fight for, interesting NPCs to talk with, and have fun! Fun is contagious!

Don’t worry if you aren’t able to finish the session in one go. Let the players dictate the pace of action. Skip ahead if attention is slipping or slow down if they really begin to dig talking to a random blacksmith.

If a player becomes interested in something in the game world, stick with it. D&D can’t be learned in a single session, but what can be gained is a curiosity for playing more games like it, where the players are creating the experience. Encourage teamwork, and group decisions.

Build to An Epic Victory

Give your players a great final payoff, whether that is blowing up a lich, or curing a plague, let them feel like heroes. Because they just became them when they rolled their first d20. Share your passions, but don’t overwhelm. Let the players discover as much as the characters.

Dungeons & Dragons offer an escape to a world of empowerment and discovery. It is the most magical journey you can offer your friends on a Friday night, surrounded by pizza. Don’t worry about perfect. Just have fun, sling some spells, and roll some dice.