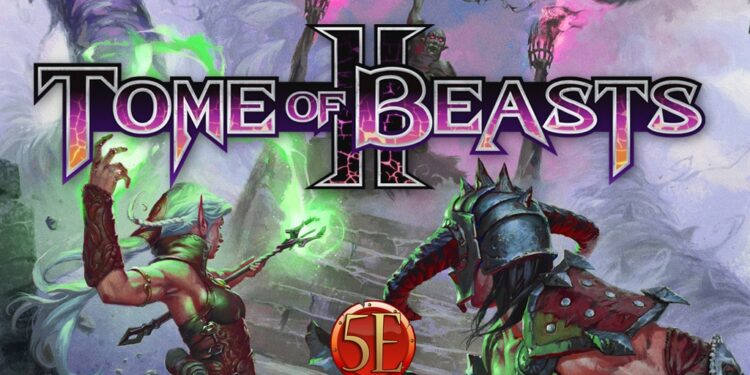 We all know Kobold Press, creators of many wonderful supplements for the world’s greatest roleplaying game and many other systems such as Pathfinder. Three years ago, I managed to get hold of the great Creature Codex. I even made a review for it, considering it one of the best 3rd party supplements for the system. Of course, I ended up getting the original Tome of Beasts after that, which I’ve put to good use during the Feywild arc in my campaign I’ve talked about several times on Twitter.

Now, it was time for the new Tome of Beasts to get into my hands. The TOME OF BEASTS 2 (which is different from Tome of Beasts 2 Electric Beastaloo, as many call the Creature Codex). I didn’t manage to get the Kickstarter copy, but I managed to get one copy sent from the UK (thanks BookDepository for not charging shipping with the purchase), and now I’m all ready to talk about it! Spoiler alert: The book is amazing.

What’s the difference between the Creature Codex and Tome of Beasts 2?

Heh, this was fun. I was really intrigued to know why they went from the series being called Tome of Beasts,  then Creature Codex, and then returning to the original name for its sequel. I tried to decipher the puzzle but found no difference in these books apart from the color difference. That’s why I contacted Wolfgang Baur himself over Twitter to solve this unanswered riddle. His response was much funnier than I imagined, but I guess I would have made a similar mistake, so I don’t blame him nor his team:

The Codex was named later, and with the thought that it was an all-new volume and not a series. This was perhaps not a great idea, as the Tome of Beasts name seems better known and better liked. And thus the next one was Tome of Beasts 2.

Then there’s the other answer that the Kobolds did write on the Kickstarter FAQ for the book, which I found funny enough to share:

Sure. We do like the idea that Creature Codex was actually Tome of Beasts 2, it just happened to be called something else. However, this book has the Tome of Beasts II moniker, as shown in the title graphics.

Honestly, we’re really not trying to be confusing. Sometimes kobolds really do just have that 8 Wisdom. 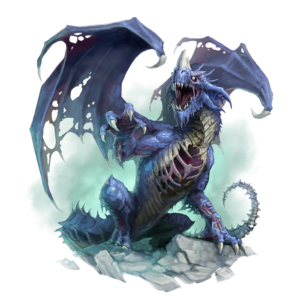 The first thing that catches your eyes when you see this book is the art. It is the ultimate marketing strategy, as it’s pretty difficult not to judge a book by its cover. The cover is stunning, but still isn’t my favorite of the bunch. I don’t know why, but when I see these types of covers with player characters battling a menacing enemy the first thing that springs to my mind is that it is some kind of book directed towards players. If you take a look at the Creature Codex’s one, it shows many intimidating monsters on it, but no player character. That’s a minor complaint and doesn’t really affect my actual opinion, but I wanted to point it out.

As regards the art displayed for the many monsters in the book, Kobold’s Press took a very similar approach to the one they did with the Creature Codex. The many monsters are amazing to look at (making me want to do a full flip-through over on Twitter, that I linked below). If there is one thing I love these books for is that whenever I need some inspiration for my games I can open them on any page and instantly come up with an adventure hook just by looking at the art. Props to the many artists who participated in this!

All the other things I stated for the Creature Codex art still apply as well. It is big enough to show to your players from the book when they face the creature. The art design allowed for the monsters to feature heavily on the pages without feeling intrusive. It’s all extremely well put together, and I am a big fan of it.

La crème de la crème. The thing you actually come for when you buy this book. How good are the monsters? Taking into consideration this is Kobold Press we are talking about, with some of the best freelancing designers out there, of course it is great. The stat blocks are clean and easy to read, with tons of new abilities. They definitely are not scared to innovate and allowed some monsters to have wacky abilities that no other official monster has. Some of my favorites include the following:

This book offers at the back a Fantasy Wildlife appendix. Whereas the previous two books gave us humanoid NPC templates to use, this one decided to go full-on weird creatures. Having the other two books I don’t have a problem with this. I have more than enough NPC templates, so these creatures are pretty handy, even though none of them really caught my attention. It feels like the Beast section from the Monster Manual, except these are more exotic.

Last but not least, all monsters come with prose for DMs to use when describing the creature the first time the players come upon one. When I reviewed the Creature Codex, I found monsters that used a prose description that was way too specific and could not be used in particular situations. I’ve noticed they fixed that here, as I couldn’t find any monster that had that problem. All in all, excellent!

The way the book is formatted is clean and elegant. The pages are not entirely white and the text isn’t the darkest tone of black, allowing for an easy read without tiring your eyes with the contrast. All monsters include a lore/description section, its stat block, and some art for it.

The lore/description for the monster gives the DM a huge amount of inspiration and details on how to run it. How the creature behaves, where it usually lives, and which other monsters it usually interacts with are usually part of these descriptions. They come separated in different subheadings to easily recognize what the monster is all about just by reading them. If you look at the Bonespitter below you may think of it as your typical giant worm, but just by looking at the subheadings I instantly know those bones coming out from it are made from its victims. If I wanted to, I can read the rest of the text for the extra details. This saves a lot of time!

The book often adds sidebars to offer ways to import the monsters to Midgard (Kobold Press’ default setting). These usually add some new mechanics for the monsters as well as ways to make them more or less powerful to suit your campaign.

Lastly, the book provides a full index divided by Environment, Challenge Rating, and Type. These are always handy to quickly find the perfect monster. 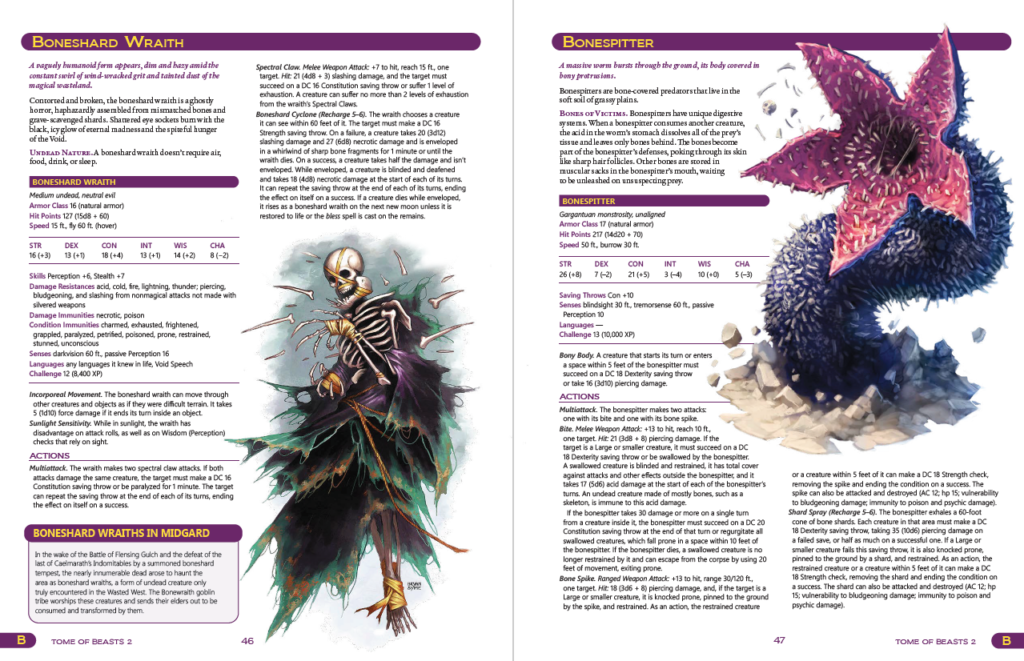 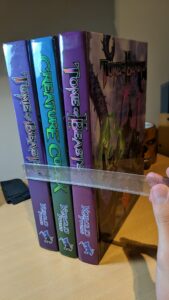 The physical book quality is, just like with the Creature Codex, top-notch. It’s sturdy and feels like it wouldn’t get easily damaged. I usually have my books imported as they are difficult to get in my country. D&D books often arrive with the bottom edge and cover slightly damaged from the shipping. This book arrived splendidly, with no marks at all. That speaks greatly of its endurance! The pages definitely feel high quality as well. If the 100+ gold pieces’ worth pages you can get in D&D do exist in real life, I’m pretty sure this book has those. All in all, far superior to the official books’ quality.

As you can see in the images, the Tome of Beasts 2 is about the same size as the other Kobold Press books, and the amount of pages is very similar (I go into further details in the flip-through).  In comparison with the official D&D books, the Tome of Beasts II has 416 pages whereas the Monster Manual has 356 pages. Consequently, we can understand that despite being much wider than the Monster Manual, the Tome doesn’t have that many extra monsters. This is mostly due to the cover and page materials. You are sacrificing portability for quality. Personally, that is not a problem for me, but if you are running out of space in your bookshelf you might have to think twice before you buy it. Lastly, just so you know, the tome is HEAVY. It really feels like a tome, weighing 3.44 pounds (1,56kg). If you usually travel to a friend’s house to DM, you might need to get the digital version of the book (I don’t personally have a digital version, but if it is like the one from the Creature Codex it should come indexed and be just as great). 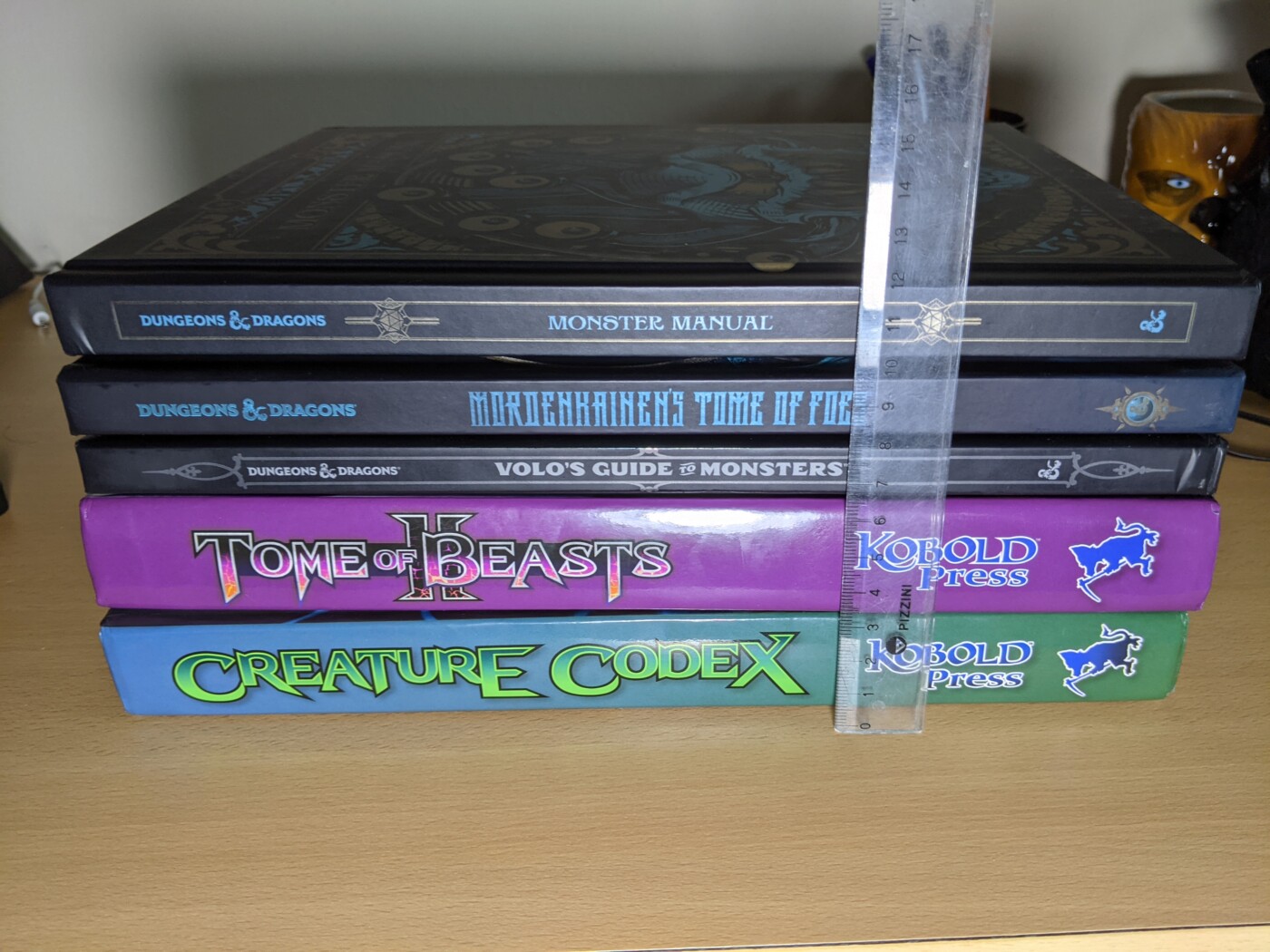 The book is much bigger than the official monster books, but only has about 100 pages more than the Monster Manual

If you want to check out some of the monsters, I made a First Thoughts flip-through over on Twitter. I plan on doing this on future products I review if I can, so be sure to follow me if you enjoy it:

Let's flip through some pages, shall we?

The book is Tome of Beasts II, by @KoboldPress

Between the three books we've got 10cm of monster goodness
In case you can't see it properly, Tome of Beasts II is 3cm long. That's as wide as the Tome of Beasts 1, and wider than the CC! pic.twitter.com/o1dPcuRKZd

There’s no room for doubt. This book, just like the previous monster books that predate this one, is amazing. Kobold Press seems to have learned to better balance the monsters from the first books, and came up with extremely imaginative ones. As always, if you are looking for unique monsters to surprise your players with, this supplement is another must-have. I personally plan on using these monsters not only in my D&D games but in some other RPGs as well. Is it better than the previous two? It’s more monsters, and all books have great monsters I want to use in my game. I didn’t notice a huge amount of creatures from one type in this book like the previous ones had (the previous ones did include tons of Fey creatures). This one feels more balanced in that aspect.

GET THE TOME OF BEASTS II