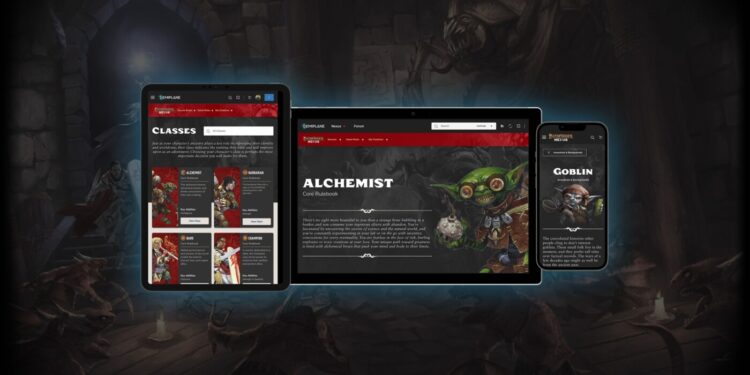 Originally released in 2008, Pathfinder is one of the most popular fantasy tabletop roleplaying games in the world, filled with unique characters, rich lore, and exciting monsters, magic, and wonder. Pathfinder Second Edition was released in 2019 with rules that are fast to learn, easy to play, and that offer more customization options than ever before. In Pathfinder, players take on the role of custom-created characters to tell cooperative stories of limitless fantasy adventures and collaborative gameplay amongst friends. Pathfinder Nexus delivers the game’s trove of sourcebooks, character options, and adventures in a convenient and easily accessible way, whether players are new to the game or are long-time veterans.

“Pathfinder Nexus will give players the kind of support that a dynamic and expansive game like Pathfinder deserves,” said Adam Bradford, Chief Development Officer at Demiplane. “I have seen firsthand how technology can elevate play experiences. I’m thrilled for fans to see how much convenience Pathfinder Nexus brings to the table so that the most important elements can shine through— the players and the stories you’re telling together.”

Pathfinder Nexus aims to make every part of playing game sessions better, starting with sought-after tools like a game compendium, digital reader, character builder, interactive digital character sheet, as well as a playspace with video chat where all the other tools are fully integrated. Demiplane has an extensive roadmap for Pathfinder Nexus, with new features to enhance play planned for years to come.

“Working with Demiplane on this project has been an absolute dream come true. Demiplane’s team brings digital expertise that is truly unique,” said Erik Mona, Paizo’s Chief Creative Officer. “With Pathfinder Nexus, we’re not only able to enhance overall Pathfinder gameplay, but this new toolset will also ensure that more people can experience the game than ever before.”

Fans can pre-order official Pathfinder digital content on Pathfinder Nexus starting today, which grants early access to that content in the digital reader. More features are planned to be added to early access between now and the full 2022 launch. Fans can also create an account to receive email updates about Pathfinder Nexus or join the discussion in the community forums at PathfinderNexus.com.

ABOUT DEMIPLANE
Demiplane brings roleplaying fans together to make games better, providing high-quality tools to form groups and enhance the ways games can be played, shared, and explored. Launched in 2020 by lifelong friends and die-hard RPG players, Peter Romenesko and Travis Frederick, Demiplane looks to revolutionize how people engage with and enjoy roleplaying games. For more information, visit www.demiplane.com.

ABOUT PAIZO
Paizo Inc. is the publisher of the award-winning Pathfinder Roleplaying Game, Starfinder Roleplaying Game, Pathfinder Adventure Card Game, Pathfinder Tales novels, as well as numerous board games and accessories. In the nearly 20 years since its founding, Paizo has received more than 100 major awards and has grown to become one of the most influential companies in the hobby games industry. For more information, visit www.paizo.com.