Try Pathfinder’s Golarion for Your Next Campaign Setting 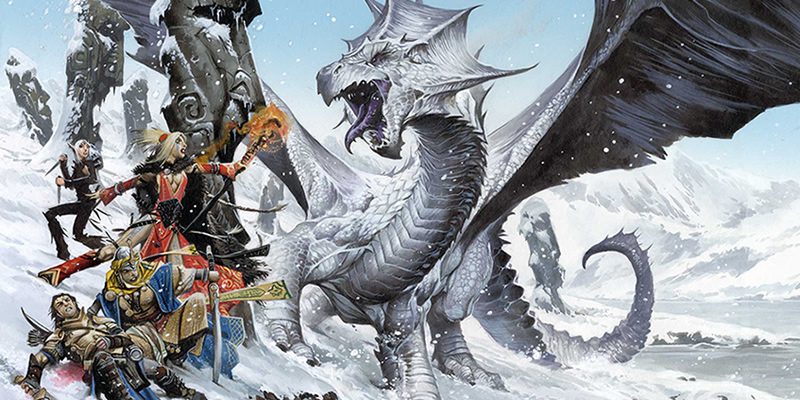 From the crumbling spires of the ancient Runelords in distant Varisia to the bustling merchant kingdoms of the Inner Sea, Golarion is the name of default world of the Pathfinder Campaign Setting and related supplements, modules, and Adventure Paths. There are some really great D&D worlds such as Krynn (Dragonlance), Greyhawk, Eberron and Toril (Forgotten Realms), and I think that Paizo’s Golarion has more than earned an unofficial spot on the list. This week on the Campaign Trail I’m providing some notes on using Golarion for the setting of an adventure or even an entire campaign. If your D&D group has been playing for years in the Realms, take a look at Golarion – it might be a perfect fit.

Way back in the 1970s a group of friends gathered around a table to play Dungeons & Dragons. Since then, history has found a way to split Dungeon & Dragons players into more and more camps with each new release. Back in 2007, Paizo was a publisher working on Dungeon and Dragon magazines, but Wizards of the Coast chose not to renew their contract. Paizo decided to begin publishing the Pathfinder periodical line as a replacement. When it was announced that D&D 3.5 was being replaced with a 4th edition of D&D and a more restrictive game system license, Paizo decided to develop and playtest its own RPG. In 2009, using the Open Gaming License (OGL), Pathfinder RPG was released as a modified & extended version of the 3.5 edition rules of D&D. Pathfinder even went on to even outsell D&D before the eventual release of the hugely successful 5th edition of D&D in 2014. 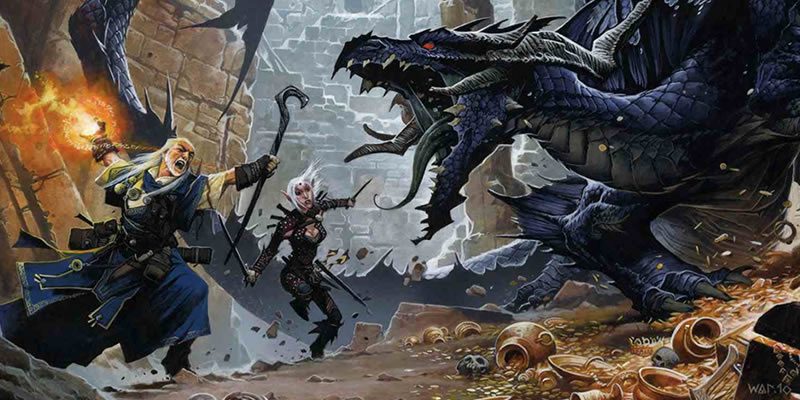 Pathfinder RPG was released under the Open Game License (OGL), so it’s core core rules are free to use, but its excellent setting books and adventures need to be purchased. Paizo has published a ton of great books, including the following setting books that will give you more than everything you need to run a campaign in the world of Golarion. 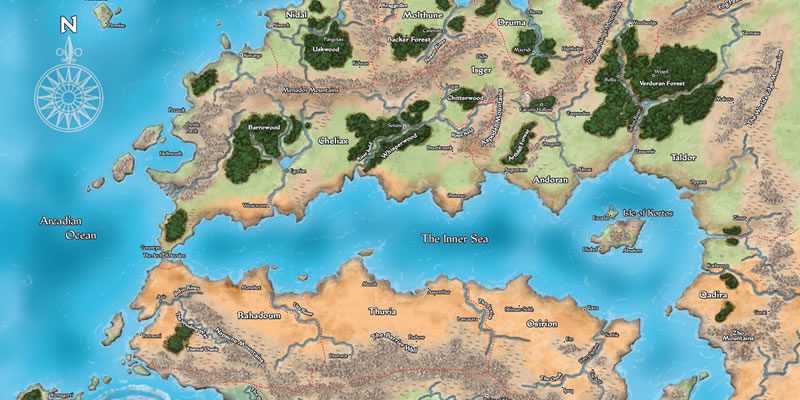 The map above is just a small region of Golarion called the Inner Sea (and this map does not even show it all). Like the Sword Coast of the Forgotten Realms, it’s the area of Golarion that gets the most attention, but there is a whole world to explore. The world of Golarion has a long history spanning thousands of years and contains eight continents separated by huge seas. If you want to run a short adventure or an entire campaign, Golarion has a ton of varied locations for nearly any theme to visit. Each of the locations below is supported with lots of adventures you can run or pillage for ideas and some have setting books too. Like the Forgotten Realms, Golarion has more than just your default fantasy setting if you are looking for something a little more exotic.

Here are ten of my favorite settings that can be found around Golarion:

Looking for people to fill Golarion with? The adventures are filled with NPCs, but you can also find more in these books:

My favorite thing about Pathfinder is the iconics (seen throughout the Wayne Reynolds artwork in this article). As Pathfinder adds more and more classes, I’ve become a lot less enamored with newest additions, but I feel like I got to know the earlier iconics by playing them as PCs and reading about then in the Pathfinder comics. If you are running a campaign in Golarion, the iconics can be a great resource for pre-generated player characters (level 1, 7 and 12) or why meet a random NPC when you can bump into an iconic. Pathfinder has made it a habit to release an iconic when they release a new class. They just released 6 new iconics to support their Occult Adventures book. Each iconic has a interesting and detailed backstory (yes lots of orphans). Here are four of my favorites that just happen to be available with the Beginner Box:

You can meet each of the iconics on the Paizo Blog starting from 2007 or you can get a copy of character sheets by signing in to download this package from the Paizo Store.

If you are looking for gods or monsters for a Golarion campaign you are in luck.

NOTE: All links to the Paizo store are provided for convenience to the reader. The links are provided without any affiliate links, so we don’t make a dime if you click and buy. There are some great books mentioned/linked to above, so please check them out and support all the great setting work done by the team at Paizo over the years.