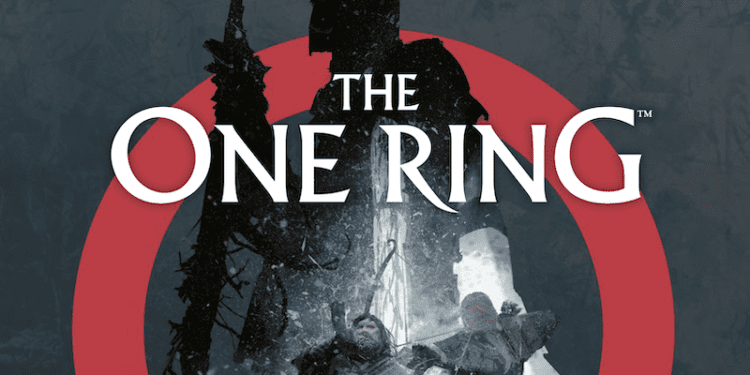 The One Ring role-playing game is set in J.R.R. Tolkien’s Middle-earth 20 years after Bilbo went on an adventure and returned. If you’ve never read the Hobbit or the Lord of the Rings trilogy, they are not expensive. You can purchase the books here (Amazon Affiliate Link), and I think you will enjoy the books. The game from Free League was brought about after Cubicle 7’s license expired, and Free League picked it up. Free League Publishing had a very successful Kickstarter on March 4th, 2021 to produce The One Ring. “The One Ring second edition uses an updated version of the system designed by Francesco Nepitello for the first edition of the game. While most of the core mechanics are similar, rules have been consolidated and improved to make a smoother and more engaging experience at the table. The 2nd edition gamebook was released and recently updated this year. It has 246 pages cover to cover with a lot of great artwork and layouts, and the mechanics of the game are crunchy enough and set the tone for the game rather well. You will be able to create heroes, and loremasters will have tools when they are sent off on adventures in a land threatened by the growing Shadow.

Okay. I love Tolkien’s stories and a lot of other people do too. They have made Tolkien-themed board games, card games, cartoons, movies, etc. I have a few different versions of TTRPGs for Middle Earth that have come about over the years. I have enjoyed the Middle-earth D&D 5th edition version of “Adventures in Middle-Earth” by Cubicle 7 and their 2011 “The One Ring” 1st edition. You might ask yourself, do we need another one? As a collector of things; I say yes.

What’s in the Book 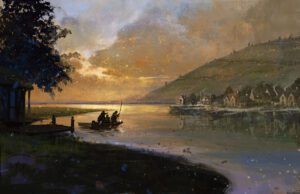 Now in its second edition, The One Ring™ comes with updated and revised rules, a new visual style, and a focus on the land of Eriador — the lone-lands west of the Misty Mountains. Among its key features are:

This book is full of player character options, adventures, precious treasures, and monsters. Here is a quick breakdown of what you’ll find in the book:

The Prologue gives a single-page timeline of the setting and a lot of background that can be helpful for quick reference. Further details are given as you dive further into the book. The setting takes place about 20 years after the ring is found. The Prologue is just a summary and a lot of details are broadened in further chapters. I like the structure and I enjoyed that they added more depth as you went further into the book. Players will build characters inspired by the main characters introduced in the Lord of the Rings. The storyteller (Loremaster) works with players to build a story using modern role-playing resolution techniques creating epic campaigns.

The aim of The One Ring is to let players feel what it means to go adventuring in a wild and perilous land from a forgotten past. It is a threatening world that has more in common with the world depicted in epic sagas or the Dark Ages of Europe than with our contemporary world.

Actions can be resolved with dice giving unexpected results against a target number. There are six 6-sided dice (success dice) and 2 12-sided dice (Feat dice). The dice have icons on them for ease of use. But standard dice can be used in lieu of the One Ring dice. The Loremaster will call for a roll when there is the possibility of failure and the players make all of the dice rolls. Target numbers are based on players’ abilities and there are mechanics for favored and ill-favored rolls, special success, rerolls, bonus dice, etc. Here’s an example from the book:

Scouting ahead for the Company, Hanar the Dwarf has a chance to notice a group of Goblins setting up an ambush. He has an AWARENESS Skill of (2), so he rolls a Feat die plus two Success dice, adding up the results of all dice rolled. As AWARENESS is a STRENGTH Skill, the roll result is compared against Hanar’s STRENGTH TN, which is 13. With the Success dice showing 4 and 5, and the Feat Die an 8, Hanar’s player does hardly need to do any maths to know that the Dwarf succeeded. 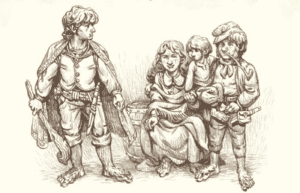 There are some good cultural options for Players from the Westlands of Eriador: Bardings, Dwarves of Durin’s Folk, Elves of Lindon, Hobbits of the Shire, Men of Bree page, and Rangers of the North. These choices give the character cultural blessings. Attributes are simplified to three; Strength, Heart, and Wits. And those are used to create derived attributes in Endurance, Hope, and Parry. The skills and proficiencies are then chosen. Monsters are grouped together

I have to say I like a lot of what I see in this book. The game is structured rather well, and I saw a lot of new mechanics along with some that are familiar. It gives just the right amount of Tolkieness theme that was brought out with the mechanics, especially the skills. There are some good tools for the loremaster to assemble a game for a group of friends. I think this is a must-buy for any fan of Tolkien and would be a great purchase if you are exploring other game systems or looking for something new. This game system is an easy transition for someone familiar with Dungeons & Dragons to jump right in and build a game.

The One Ring Strider Mode – Strider Mode presents additional and modified rules to facilitate solo play in The One Ring™, as well as guidelines and tips for solo players and a selection of random tables to help incite and inspire your lone wanderings across Middle-earth. A copy of The One Ring™ core rules is required to use this supplement.

The One Ring Starter Set – The One Ring Starter Set contains all you need to take your first step into Middle-earth and experience the adventures Hobbits get up to. With streamlined rules and ready-made characters, it is easy to quickly sit down and actually play the game. The One Ring is set between the time Bilbo went on his journey and the events in The Lord of the Rings™, allowing you to explore the Shire by taking on the roles of those same Hobbits whose children will go on to do extraordinary things, such as Drogo Baggins, Rory Brandybuck, and Esmeralda Took. Besides the Rules and The Adventures, there’s a full compendium covering the four Farthings of the Shire, all the way from Greenholm and the White Downs in the west to Buckland and the Old Forest in the east. This boxed set contains:

The One Ring Loremaster’s Screen & Rivendell Compendium – A deluxe Loremaster’s screen in landscape format for the second edition of The One Ring™ roleplaying game. It features beautiful art on the outside and a host of useful tables and important information on the inside while keeping the Loremaster’s schemes hidden from the eyes of inquisitive players.

The Rivendell compendium contains information about The Last Homely House, including a map of the valley and a plan of the house itself. Some of Rivendell’s inhabitants are included, including Elrond, who can be used as a new patron. Finally, there are also new rules for how to create High Elf Player-heroes.

Tribality received pdf review copies of this book. The One Ring, Middle-earth, and The Lord of the Rings and the characters, items, events, and places therein are trademarks or registered trademarks of the Saul Zaentz Company d/b/a Middle-earth Enterprises (SZC) and are used under license by Sophisticated Games Ltd. and their respective licensees. All rights reserved.