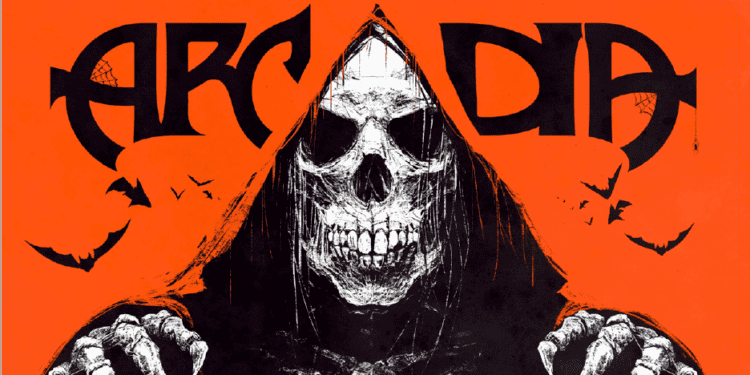 Wow! That’s a gorgeous, spooky-looking cover! Did that distract you from the fact that I took almost a month to write this article? Sorry, I’ve been invited to my first con in the US and met a whole bunch of amazing people there (Including Hannah Rose, the editor from Arcadia. Hey Hannah! It was so great to meet, chat, and play games with you in person!). I’m intending to write an article about that for the Gnome Stew, but that’s not why you are here today! Let’s get to the fun part in this very Halloween-themed issue:

This issue of Arcadia comes with the new MCDM Safety Toolkit! The fact that this issue deals with horrific things makes it a great companion to this. So far from what I’ve seen, buying this issue is the only way to get it. This toolkit has a whole PDF written by experts on the subject indicating why you should use Safety Tools in your game, how to use them effectively, and more. The tools included are nothing new, being the lines and veils, the X card, and stars and wishes. However, having all this information in one place is extremely useful and I’ll totally be using them from here on out in my games. Since I started using safety tools I feel much safer on the boundaries I have and how far I can go with some themes without making anyone uncomfortable. Be sure to give it a try! What’s more, the safety toolkit includes a checklist you can print or send to your players to fill out, making the job oh so much easier. It’s incredibly complete and form-fillable. Saved it for future use!

@cconowitch
The first of these articles is all about cryptids. Four of them to be precise: the grey aliens, the shuck, the deathworm, and mothman. In the words of Celeste “a cryptid is a creature
some claim exists but is never proven to exist. Cryptids are creatures of legend, but they aren’t part of established mythologies and they don’t follow archetypes the way other fantastic critters do.” As you may have read in previous articles of mine, I love Celeste’s content, as we both really like monsters, and puzzles. I didn’t know the term cryptid, but these monsters of legends always fascinated me, so seeing them actually become monsters for the game while being so well represented is just the thing for me.
Grey aliens are cowards who come looking for information from the world in secret invasions. While you would never associate them with D&D, Celeste provides some interesting thoughts and opinions on why it can be really interesting to add them, while also adding in some tactics and plot hooks. I really like how they can negate certain types of damage because of how technologically advanced they are, forcing the players to battle strategically. Secondly, we have the shuck, a fantasmal demonic dog that targets specific people. By creating duplicates (and taking a bit of inspiration from the MCDM minion rules I see) it can easily beat the party in number, surely making battles with them very memorable. The deathworm I found it a bit less interesting because D&D already has the purple worm, and this is something like a less CR version of it. Don’t get me wrong, I actually love having a gigantic worm to throw at low-level players. It just isn’t as special as the others. Nevertheless, the fact that this monster regenerates adds an extra layer of complexity I really enjoy for the PCs, as the worm can escape underground for a bit to regenerate some hp, and come again full health to destroy them. Lastly, but definitely not less important, is the mothman; my favorite of the bunch. Celeste added a whole system of “doom points” to make it much more interesting. As soon as you first see it, be scared, you are fu*&ed. I don’t want to say much to not ruin the surprise. Just trust me it’s really special. 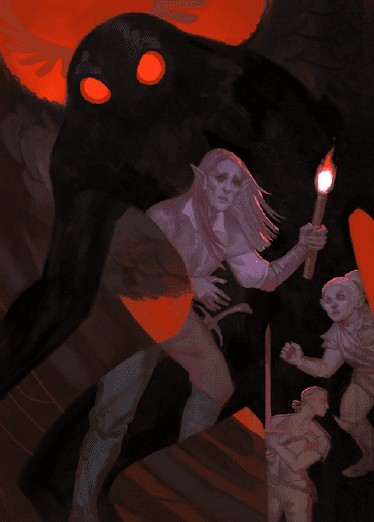 Banana Chan
Banana Chan is a fantastic creator, so seeing her write something for Arcadia was no surprise to me. Now, when I read that it involved comedic horror, then I was dying to read it, and it did not disappoint. The fiendish regulars provides the DM with a set of three NPCs you can throw into your horror-themed, doomed world for some comedic element. These were mostly made to stick with the party for a while, making your players chuckle while they may want to adopt the NPC/chop their head off, but can’t because they know too much information we need. All NPCs include ways you can tie them to your game, how they are involved with the Oh Great Tyrannic Ruler Who Domains The Land, and plot hooks.
The first NPC is the fanlord, a person you will find fangirling over the Ruler the whole time, with the whole collection of stamps signed by “The Great One”,  who possibly has no clue who this random fanatic is. Secondly comes the doomsday salesperson; someone willing to convince everyone “doomsday is right around the corner, FOR REAL THIS TIME!”, and sell you their useless stuff. I adore NPCs who sell useless magic items, and have created many of my own for my home game. Banana left some in here for you to sell your players as well! Lastly, comes the underpaid (or not paid at all) assistant of the Ruler. We’ve all got one of those kinds of jobs, so it’s pretty easy to put yourself in character. They usually are sent to relay information from the Ruler to the PCs, but may stay for an adventure, and who knows? Maybe leave the Ruler as well. Mixing them with the fanlord to create something similar to Smithers from The Simpsons could be fun as well.
All these NPCs have stat blocks of their own, and they don’t take themselves too seriously, which is something I got some chuckles from while reading. You can see an example from the Fanlord below. I’m not going to judge in detail the stat block per see as I know this isn’t your typical monster nor what the article is truly about, but I must say the three of them look really fun to run. 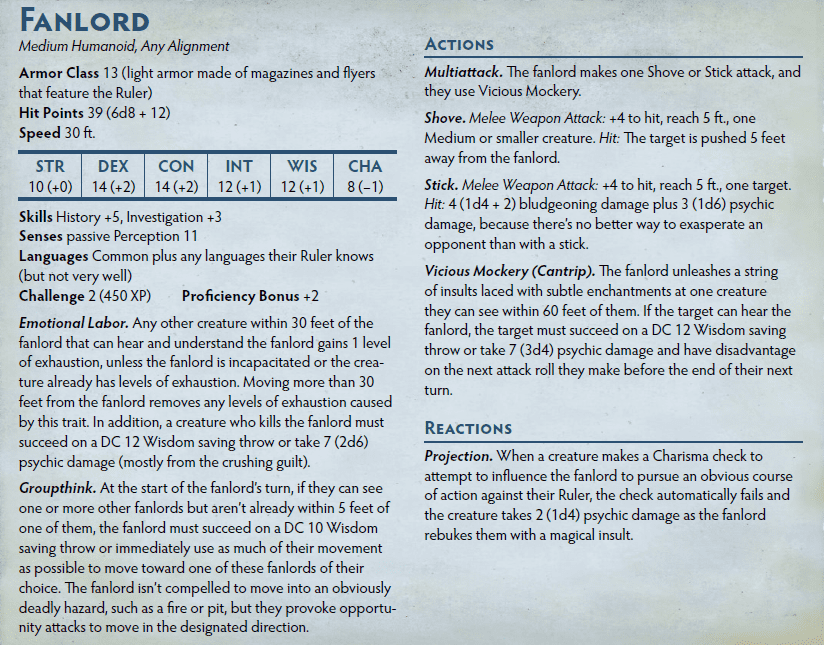 It’s always a bit difficult to review an adventure or encounter while trying not to spoil it, and having one that is so heavily focused on puzzles makes it harder. I’ll do my best to give my personal opinion. Just so you know, I love puzzles, so an adventure that relies so much on them was an interesting starting point. Nevertheless, it always comes at a shock to me when I read that an adventure can be played by any character level (and no player characters limit). How does this adventure face those things? Is it successful at it?

Puzzling Out The Devil is an adventure that involves the player characters helping an exorcist save a noble’s son from a devil that possessed him. In order to do that, the ritual circle must be completed. As the exorcist has committed a huge mistake, he is scared to keep going, and asks the PCs for help. In a way, this adventure feels like those escape rooms in which you have to solve puzzles by looking for clues in the surroundings, getting to know the backstory of the characters and place, and talking to some NPCs for help and clues. You already know from the get-go that completing the ritual means you have to face the devil.

The puzzles can be challenging, but offer a great deal of clues for the GM to help the players. What’s more, the more clues the players find in their surroundings, or by asking NPCs, the easier these puzzles become (sometimes you do need these clues in order to continue, but there are several ways for you to give them to the players). The puzzles are given at the very start, meaning the players can start from whichever they prefer, and change to another if they feel stuck. What’s more, even if they fail a puzzle, that is also something the adventure takes into consideration: failing just makes the boss battle at the end harder, but you can keep going. I absolutely love this design decision, creating a way for players to skip puzzles they might not like as much, at a cost.

The puzzles are elegant and are included as handouts, with some for the GM as well to make it easier to run, the NPCs are included in a Dramatis Personae section that seems to have become a standard in MCDM adventure articles, offering guides on how to roleplay NPCs, their pronouns, how to pronounce their name correctly and more! Amazing! Lastly, as the adventure deals with some sensitive themes, there are side blocks and sections that guide the GM on how to tackle them. There is one named Father-Son secrets I specifically really enjoyed Sharang included.

Last but not least, how does the adventure handle being a no-player limit, no-level range adventure? As indicated before, the fact that it feels like an escape room makes it very easy to just put the game system aside and just solve the puzzles. This means that the mechanics (player limits and character levels) don’t play a big role. Nevertheless, there is a combat at the end, as well as some checks you have to make to avoid damage, or to get clues. These seem to be designed for a lvl5-7 party as the damage received is not very high, and the checks are between 12 and 20. Despite the article includes some ways to modify the difficulty, it still might not be enough. A lvl 12 party might not find much difficulty during the checks and combat (except when an ally PC is charmed), but the puzzles are still going to be the main focus and challenge. Additionally, I don’t see player characters from lvl10+ doing small tasks like helping a family when they could be stopping extraplanar beings from invading the Material Plane (yeah, I know this adventure involves a devil, but it feels short-scale in comparison to other things they could be doing) In conclusion, I would give a level range to make things easier for everyone, with a note that indicates that the puzzles are still fun to run and you should definitely steal them for your games. 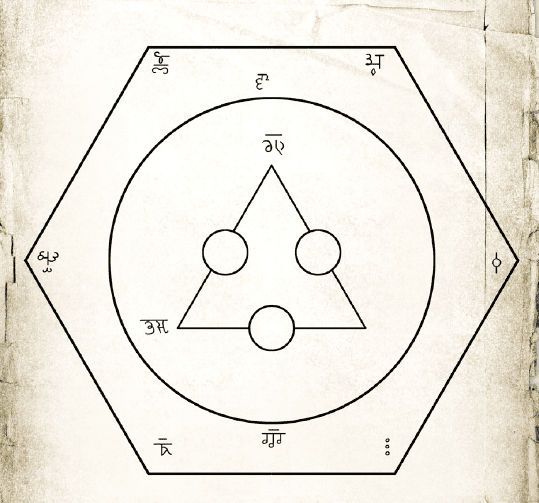 To sum up, this issue of Arcadia offers spooky stuff, all of them being my cup of tea: monsters, humorous NPCs, and puzzles! If these are things you enjoy as well, then it is a no-brainer for you to get this. Now, if you buy Arcadia to get player content like races, classes, etc, then just skip this one, as it is DM-focused.

Have you ever introduced cryptids in your games? How much humor do you have in your campaign? Do your players like solving puzzles? Let me know in the comments below!