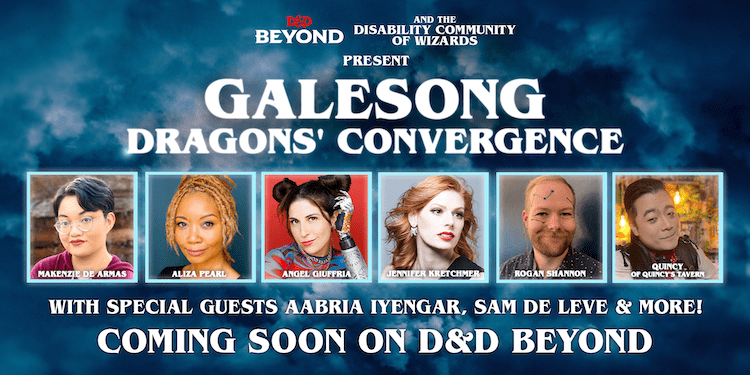 RENTON – Dec. 8 – Everyone loves to experience stories of heroes doing their thing, but not everyone in the ever-growing D&D community consumes content the same way. Dungeons & Dragons is excited to present Wizards’ first official actual play event featuring American Sign Language interpretation and focusing on characters and performers with disabilities. Galesong: Dragons’ Convergence will be presented on Thursday, December 15th at 4 pm PT on youtube.com/dndbeyond, with additional content shown throughout the week.

“With a phenomenal cast gathered this past October for National Disability Employment Awareness Month, this game features disabled players and characters adventuring and thriving in the world of Dungeons & Dragons,” said Makenzie De Armas, game designer for D&D Studio & co-lead for Disability Community for Wizards (DCW). “My journey as a D&D creator is irrevocably entwined with my own disability journey, and I’m so excited to showcase my fellow D&D fans and performers in the vibrant disabled community!”

The adventure, written and DMed by De Armas, features the setting presented in the most recent D&D Starter Set: Dragons of Stormwreck Isle. This fantastical island off the Sword Coast is a center of magical energy that has been shaped by the lives and, especially, the deaths of dragons. When a ceremony on Stormwreck Isle takes an unexpected turn, five heroes must try to weather the resulting storm and prevent a disaster that could threaten the multiverse!

The adventure rolls out over a week of content. Starting on Tuesday, 12/13, see how it all begins when guest players Aabria Iyengar (Dimension 20, Battle for Beyond, Critical Role) and Sam de Leve (Geek & Sundry, D&D Live) task two groups of adventurers with two very unusual missions in Galesong: Before the Storm!

Then fans can see it all come together on Thursday 12/15in Galesong: Dragons’ Convergence with special appearances by Iyengar and de Leve. Fans will catch a quick glimpse of a few more friends including Taliesin Jaffe, Matthew Mercer, Brennan Lee Mulligan, Amy Dallen, and Robbie Daymond.

Finally, on Saturday 12/17, fans can go behind the scenes for some Galesong secrets in a video of conversations with the creators and performers to learn about our players, how they worked with Makenzie to bring their personal visions of their characters to life in D&D, and what it means to them to say that D&D is for everyone!

More information on the Galesong: Dragons’ Convergence can be found here: http://www.dndbeyond.com/posts/1404-join-us-for-galesong-dragons-convergence-an-actual

More About the Players:

Makenzie De Armas (she/her) is a Game Designer for D&D, credited on projects like Journeys Through the Radiant Citadel and Starter Set: Dragons of Stormwreck Isle. She also served as one of the worldbuilders for Critical Role, working to develop the city of Ank’Harel as it appears in Call of the Netherdeep. When not rolling dice, she serves as the Education Lead for the Disability Community of Wizards and shares her experiences on various panels, most recently speaking on the ‘#ActuallyAutistic GMs’ panel at PAX Unplugged. Follow her on Twitter: https://twitter.com/MakenzieLaneDA

Jennifer Kretchmer (she/they) is a producer, writer, actor, and streamer who has worked on more than a thousand episodes of television. Jennifer is the creator of the Accessibility in Gaming Resource Guide and the Disabled Pros in TTRPGs Directory, and is one of the authors of D&D’s “Candlekeep Mysteries.” They currently appear in “Children of Éarte” with DM Deborah Ann Woll, and contributed to Galesong as both a player and disability consultant. Follow her on Twitter: https://twitter.com/dreamwisp

Quincy of Quincy’s Tavern as Quincy

Quincy (he/him) is a TikToker, Twitch partner, and storyteller known to run a small fantasy tavern on the internet. To date over four million adventurers have become loyal patrons by following Quincy’s Tavern on TikTok and enjoying the tavern’s custom recipes, advice for weary travelers, and collaborations with Critical Role, Wyrmwood and more. Follow him on tiktok: https://www.tiktok.com/@quincylk [alt: twitter: https://twitter.com/quincystavern/]

Angel Giuffria (she/her/they) is an actor, advocate, consultant & oh, yeah, cyborg, whom you might have seen on “Chicago Med,” Hulu’s “Good Trouble” or on AMC’s FearHQ. Her spectacular cosplay looks, often designed to creatively feature her limb difference, have been spotlighted at Nerdist, Vice & more. Follow them on twitter: https://twitter.com/aannggeellll

Rogan Shannon (they/he) works as a freelance Deaf interpreter, occasionally making YouTube videos. In their free time, they love to read just about anything, play various board games and TTRPGs, and watch too much for their own good. Follow them on Twitter: https://twitter.com/shan_no_nosays

Aliza Pearl (she/her) is a performer, DM and creator you might know from Ripley Improv, Star Trek: Shield of Tomorrow, DDB Plays: Call of the Netherdeep, the Streampunks and more. She recently appeared on “NCIS: Los Angeles” and starred in the world premiere of the musical “Teaching A Robot to Love.” Follow her on Twitter: https://twitter.com/alizapearl

About DCW: The Disability Community of Wizards is an employee resource group, whose mission is to promote a culture of belonging for disabled Wizards and customers, and to advocate for increased awareness and education around accessibility and disability inclusion.