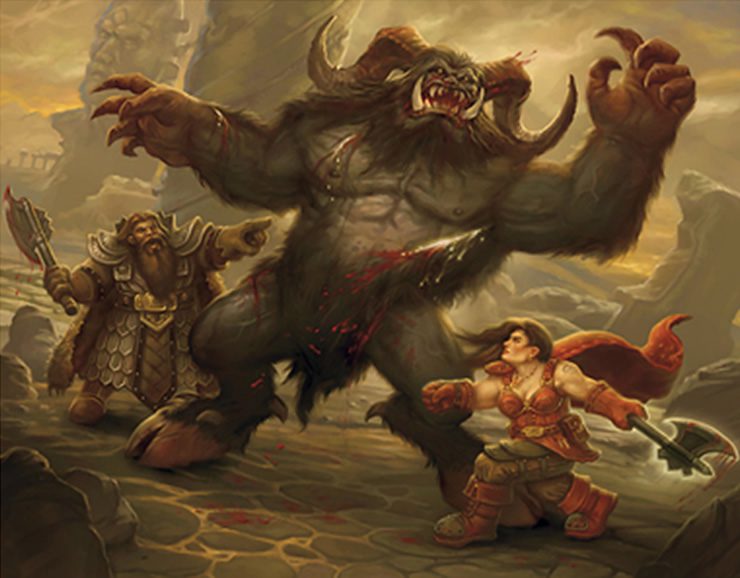 So the new Dungeons & Dragons 5th edition has minimized the combat system and veered away from advanced tactical rules and Flanking can not be found in the player’s handbook.   I don’t think placing miniatures on a map exactly is really necessary, and sometimes I don’t mind placing miniatures on the table to get a general feel of combat. So being true to the new D&D5e rules, you would need to use a ruler for movement with your miniatures. With the current size of miniatures, then 1″ would be scaled for 5 feet. Gary Gygax would be proud, because those same type rules can be found in my Advanced Dungeons & Dragons books (but they are much more complex, go here if you want to see it all broken down, and understand AD&D combat) and everything was done in inches. But I don’t remember anyone following these rules correctly back in the day.

There are a lot of people still using grids today, and so D&D 5e has variant rules for movement using a grid. There are no diagonal calculations, just use a 1″ grid, and convert 5ft into 1 square, and move the number of squares. Here are the playing on a grid rules for your reference:

Variant: Playing on a Grid (If you play out a combat using a square grid and miniatures or other tokens, follow these rules.)
Squares. Each square on the grid represents 5 feet.
Speed. Rather than moving foot by foot, move square by square on the grid. This means you use your speed in 5-foot segments. This is particularly easy if you translate your speed into squares by dividing the speed by 5. For example, a speed
of 30 feet translates into a speed of 6 squares. If you use a grid often, consider writing your speed in squares on your character sheet.
Entering a Square. To enter a square, you must have at least 1 square of movement left, even if the square is diagonally adjacent to the square you’re in. (The rule for diagonal movement sacrifices realism for the sake of smooth play. The Dungeon Master’s Guide provides guidance on using a more realistic approach.) If a square costs extra movement, as a square of difficult terrain does, you must have enough movement left to pay for entering it. For example, you must have at least 2 squares of movement left to enter a square of difficult terrain.
Corners. Diagonal movement can’t cross the corner of a wall, large tree, or other terrain feature that fills its space.
Ranges. To determine the range on a grid between two things—whether creatures or objects—start counting squares from a square adjacent to one of them and stop counting in the space of the other one. Count by the shortest route.

But if your group likes playing with a grid that’s cool.  But in that case then you may have heard your players bring up flanking.  Flanking in other editions meant you gained a bonus to hit and combat advantage.  The combat advantage meant a lot to the class builds, so there was a lot of movement and shifting on the grid to get your miniature/token in the perfect spot to cause maximum damage.  But that’s really not the case anymore.  It may become an optional advanced combat variant rule along with diagonal movement in the Dungeon’s Masters Guide.  So why did they remove the flanking from the core rules?

Well the reason is that Mike Mearls said flanking was difficult to grasp for many players, it wasn’t a problem with single square figures, but problems and questions always arose with larger figures that occupied more than one square. With large figures flanking positions are not that obvious.  So with the upcoming DMG we may see flanking and other advanced tactical combat rules like facing, rear attacks, front flank, rear flank, shielding, bullrush, disarm, feint, and trip. Which I probably won’t add to my games. Just seems like a headache.

So if you do have players that bring up Flanking, then let them know that they can spend their Action during combat on their turn to use the Help action.  You have to be next to the creature. If you help someone then that will give them advantage on their turn.  This gives advantage during melee combat, and it will even help someone that is using a ranged attack and you are adjacent to the creature. Here’s the rule for reference:

You can lend your aid to another creature in the completion of a task. When you take the Help action, the creature you aid gains advantage on the next ability check it makes to perform the task you are helping with, provided that it makes the check before the start of your next turn.
Alternatively, you can aid a friendly creature in attacking a creature within 5 feet of you. You feint, distract the target, or in some other way team up to make your ally’s attack more effective. If your ally attacks the target before your next turn, the first attack roll is made with advantage.

If they don’t like that then perhaps you can hit a middle ground with the players.  If they have a bonus action that normally attacks, then they can give that up and replace it with the Help action.  That isn’t RAW, but it will move the game along and hopefully appease them, and they won’t want to use the advanced tactical combat rules in the upcoming DMG. What do you think? Let me know.