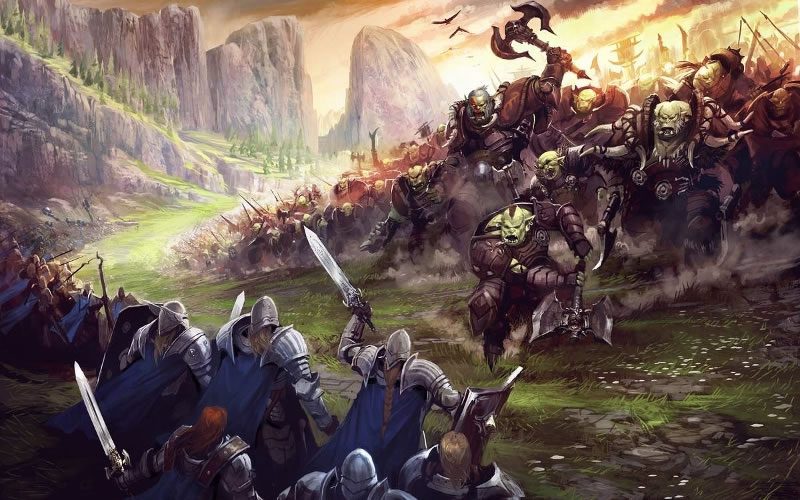 If the title of this article made you really angry and filled with hate… take a deep breath. It might be time to heal and move on. Let’s look at the history and why the edition wars should finally end.

A Brief Look Back

Way back in the 70s a group of friends gathered around a table to play Dungeons & Dragons. Since then, history has found a way to split Dungeon & Dragons players into more and more camps with each new release. Today, tabletop RPG players are split up using rules for classic D&D (1st and 2nd edition), D&D 3.5, Paizo’s Pathfinder, D&D 4th edition and now D&D Next or 5th edition. In addition, a larger and larger number of non D&D games have emerged including 13th Age, Dungeon World, FATE, Savage Worlds and more.

Admiral Ironbombs provides an excellent recap of the “edition wars” for those looking for a refresher or who are lucky enough to be a newer player.

Why the Edition Wars Should Finally End

They Got It Right This Time

Unlike with previous releases (especially D&D 4th edition), Wizards of the Coast (WoC from here) may have finally released a set of rules that got it right. “It” being so many things, but basically rules that players, of all the various editions of rules, actually want to try. WoC kept the good from 4th edition and brought back the best fit rules and mechanics from previous editions. WoC had a really tough job and they pretty much nailed it. Much of the improvement was simply limiting player power with less hit points, less magic, less exponential growth, less, less, less.

More Classic Feel Without the Complexity

Dungeon & Dragons 5th Edition (5e) focuses on the three pillars of adventure: exploration, social interaction and combat. In Dungeons & Dragons 4th Edition (4e), I found it hard to find balance with combat taking so long. When looking at play time spent by pillar, anything outside of combat was a short break before the next encounter.

5e combat is quicker and only a portion of the game, so you need to create a complete character – not just a token that has cool combat powers. In D&D 3.5, Pathfinder and 4e players would tell me they want to make a player with attack “X”. Some players in these editions did a great job talking in character and having rich backgrounds – but I have heard hours of “I swing my sword and push that one 3 squares”. I love how 5e makes the background of a PC just as big a part of the character sheet as their combat skills.

Why do D&D players choose to punish themselves with old rules, written over a decade (or decades) ago, that miss out on new ideas. There are great ideas from every edition (even 4e) since D&D was first released and by competitors. The 5th edition rules are modern, borrow from everyone (even themselves) and are meant to be modified by groups to their liking. It will be very interesting to see what is included in the Dungeon Master’s Guide when it is released in December. If you like grid based combat, bring it in. If your group likes to make really complex, optimized PCs – start power building. 5e provides a set of sleek rules and then gets out of the way.

When Will the “Edition Wars” End?

For the “edition wars” to be over does not require every player to move from whatever rules they are playing to 5e. The “edition wars” will end when the majority of D&D players (new and old) are playing 5e rules and/or when most players are bored of arguing about which rules are best.

Currently, Pathfinder is officially the top seller of this group as D&D was moving from 4th edition to 5th edition. The sales for the few 5th edition books that have come out so far have been very high (if you pay attention to the Amazon or Indigo bestsellers pages or listen to anecdotes from stores) and D&D will be back on top when the Fall 2014 sales numbers are released in 2015.

Let us know your thoughts in the comments below.