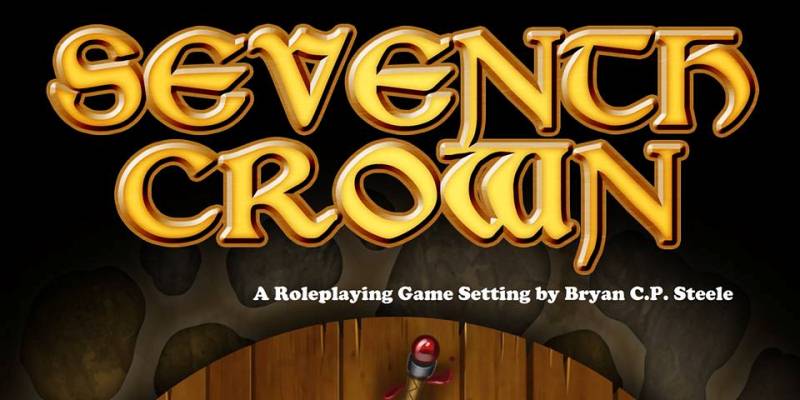 Welcome to Seventh Crown, a unique roleplaying game setting of high fantasy, high magic, and even higher adventure. Seamlessly using the best new roleplaying rules, Seventh Crown takes everything you might have read in settings like Forgotten Realms, Skull & Shackles, Dragonlance, etc. turns it upside down and shakes it up into something never seen before. Players will become part of a larger world filled with politics molded by magic, nations whose borders are no longer lines on a map – but the very blood in their veins. In Seventh Crown, entire kingdoms are not defined by physical territories, they are based upon who wears one of six epically powerful magical Crowns and to what species they belong.

Seventh Crown will bring a fresh beginning filled with unique struggles and epic excitement to a RPG gaming group, with an entire setting primarily based on the comings, goings and uses of six Crowns of Leadership (and the legendary missing seventh). These Crowns, built from the pieces of an ancient evil that shattered the last true political empire of this world, carry the power to directly influence all members of their own race (elf, dwarf, human, etc.) through the commands made by the Crowns’ wearers. The closer someone is to the bearer of their race’s Crown, the more ironclad the influence of these commands – creating kingdoms of men, elves and orcs that are not defined by borders or lines on any map. If a Crown is worn by a dwarf then ALL true dwarves feel its influence, and fighting against the laws and edicts of its bearer becomes more difficult the closer they are to where the current king or queen of dwarves currently lives. No matter how far away someone is, they still hear the Crown whispering to their will. Who wears the Crowns become the rulers, and these magically-reinforced kingdoms exist across any amount of stone walls, runic warding, or reams of signed treaties or alliances. When a Crown changes hands, the way the world works changes in an instant. Sometimes these changes could make things very interesting for Players whose characters suddenly find old laws erased and new edicts pulling at their willpower… potentially putting old friends at odds with the commands burning in their blood.

Headed to Kickstarter in November, Seventh Crown is designed and written by Bryan Steele, writer of award-winning projects such as the Conan, Babylon 5, Glorantha and was personally responsible for many of the great creations from the original Warmachine: Prime and Iron Kingdoms RPGs. Putting thirty years of gaming experience into this new work, Seventh Crown promises to be some of his best work to date. Already teamed with some of his former colleagues to create a beautifully illustrated piece of work when the campaign gets funded, there is a lot Seventh Crown will have to offer to fans of D&D 5E and other similar roleplaying game systems. Currently existing as a public Facebook page, the Seventh Crown team will be releasing previews and tidbits from the creation files of the setting book all the way up to and during the Kickstarter campaign.

The Seventh Crown team really wants to make this project work and leave its mark, and they are going to need your help to spread the word and get people listening. So,head on over to https://www.facebook.com/seventhcrownrpg and follow it. You’ll get previews, good conversation, and the first heads up on what the Seventh Crown Kickstarter is going to bring you as future backers!

All Outta Bubblegum – the RPG