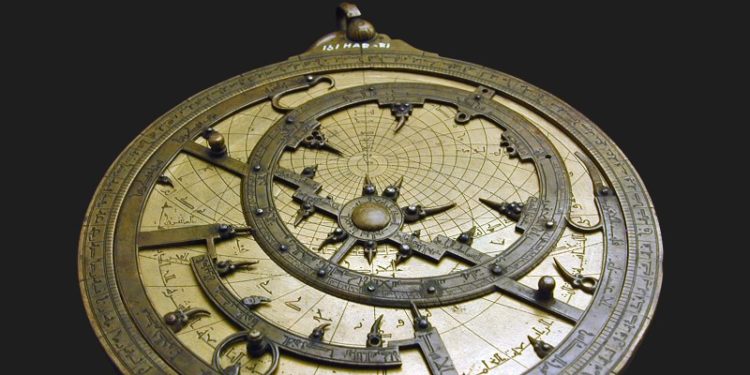 In a fantasy setting, if magic items are created through deliberate action, it’s hard to imagine that crafted magic wouldn’t be applied to ships and sailing. And, well, enchanted ships, sails, rudders, and the like are significant in the source fiction. This article is a rough-draft supplement to Shawn’s Naval Combat PDF, available on DTRPG.

On one hand, most ships are not living or in possession of a soul. (That’s a different article in my “write-this-someday” pile, for which I expect to owe deep apologies to Robin Hobb, among others.) On the other, whatever the spiritual conditions of the ship’s officers, they can probably still attune magic items. For items that require attunement to function and are permanently attached to the ship, the captain, first mate, and one other officer can each attune one item, using their own capacity for attunement.

A single ship can’t use more than set of sails at a time. A ship can have one of a figurehead or a prow or a bowsprit.

All astrolabes gaze upon the heavens to glean wisdom. This magical astrolabe offers counsel as well as navigational guidance. You gain advantage on all navigator’s tools checks using the astrolabe of augury. While traveling over water, you can use the astrolabe to cast augury. It can be used once, and can’t be used again until the next dawn.

This figurehead is carved and painted to resemble a chromatic dragon’s head. As an action while you are aboard the ship, you can cause it to exhale destructive energy. The type of dragon that it resembles determines the energy type and shape of its breath weapon. When you use the breath weapon, each creature in the area of the exhalation must make a DC 13 saving throw, the type of which is determined by the dragon the figurehead resembles. A creature that fails its saving throw takes 6d6 damage, or half damage on a success. The figurehead can be used three times, and regains all expended uses each dawn.

The silk of phase spiders and stranger creatures has been woven into these sails. While the ship is not becalmed, you can spend 1 minute in contact with the ship’s mast to create a thick fog to a distance of 60 feet from the ship. Choose one of the following planes: the Feywild, the Shadowfell, the Astral Plane, or the Plane of Water. If you are already on one of those planes, you can choose the Material Plane. When the ship sails out of the mist, it and all of its passengers are plane shifted to the chosen plane. The ship always appears in a body of water at least large enough to hold it. The sails work once, and can’t be used again this way until the next dawn.

Additionally, faraway sails take half damage from bludgeoning, piercing, or slashing attacks made with a nonmagical weapon.

This figurehead, heavily lacquered to resist the elements, depicts a crowned elven woman with fangs and outstretched claws. When you are aboard the ship and it rams another ship, the figurehead shrieks and laughs. The captain of the ship you ram rolls a DC 12 Wisdom saving throw. On a failure, creatures aboard that ship are frightened by the figurehead until the end of the ship’s next turn.

An antique iron or brass lantern hangs at the end of this bowsprit. When you light the lantern at night, undead creatures that come within 200 feet of the bowsprit seem to burn with spectral fire and give off bright light in a 10-foot radius.

When your ship would take bludgeoning, piercing, or slashing damage from a nonmagical weapon, you can use your reaction to grant the ship resistance to bludgeoning, piercing, and slashing damage from nonmagical weapons until the beginning of your next turn. The ship and all of its crew momentarily seem ghostly and translucent. Using this power extinguishes the ghost-lantern and prevents it from being relit until the next dusk.

This flag marks your ship and crew as pirates, neither protected nor bound by any kingdom’s law. While you are aboard a ship that flies these colors and you are not incapacitated, the ship can continue to maneuver and its speed is not reduced while it has 0 hit points but is not destroyed. It becomes completely submerged in 2d10+2 rounds instead.

This ship’s bell is inscribed with warding runes. It sounds on its own the first time each day that a charmed creature comes aboard.

The edges of these sails are decorated with feathers. The ship’s speed increases by 10 feet. While the ship is sailing with the wind and moves at least its speed in a round, you can command it to fly. It can ascend up to half its speed each round. If the wind shifts so that it is no longer sailing with the wind, or if it fails to move at least its speed in a round, it can’t fly and descends gently (60 feet per round). Especially at higher altitudes, it can be hard to predict shifts in the wind’s direction, requiring a Wisdom (Survival) or Wisdom (water vehicles) ability check.

While looking through this spyglass, you ignore light or heavy obscurement caused by mist, fog, or clouds.

While looking through this spyglass, you can see in dim light within 1000 feet of you as if it were bright light, and darkness as if it were dim light. You can’t discern color in darkness, only shades of gray.

As an action, you can see invisible creatures and objects within that range for 1 round. You can use the spyglass this way once, and can’t use it again for 1 minute.

These sails are a white so pure as to dazzle the eye. As an action while touching the ship’s mast, choose one ship that you can see within 1 mile. The ship’s master gunner (or captain if there is no master gunner) rolls a Constitution saving throw. On a failed saving throw, all creatures on that ship that can see the sunlit sails are blinded until the beginning of your next turn. The sails work once, and can’t be used again this way until the next dawn.