On the Table: Small World, Gateway Strategy Game for 2-6 players

“It doesn’t matter how many players or how old they are, Small World delivers a fun, fast-paced game every time and is a cornerstone of our collection.”

Small World is a tile-based strategy game for 2-6 players ages 8 and up. Rules are simple, play is fast and it is as fun for 2 players as it is for 6. When combined with the “Small World: Underground” stand-alone expansion and the Tunnels expansion (found in “Small World: Realms“) you can play with up to 6 players. Small World is also available on iPad (2-player only).

What is a Gateway Game?

The number of players determines which map you’ll be using. The game comes with a different map for 2, 3, 4, and 5 players (and there’s even a new 6 player map available as well). Each map has its own Turn Counter, so 2 player games run 10 turns, while 5 player games only go 8 turns. The small board provides play space for either 2 or 3 players depending on which side you use. The larger is for 4 or 5 player games. Providing four boards is the secret to SW being as fun for 2 players as it is for 5.

The person with the pointiest ears goes first.

Players start their turn by picking one of six race/special ability combinations that are determined randomly before each game. This is the secret to SW’s replayability. You may have Flying Skeletons and Mounted Giants in one game, then Underground Skeletons and Fortified Giants in the next. The basic game comes with 14 races and 20 special abilities which allows for scores of potential combinations.

The combination of race and special ability tells you how many tiles of that race you receive. The Commando Sorcerers shown to the right grant you 9 Sorcerer tiles, where the Alchemist Giants net you 10.

Small World is a strategy game where players take over territory to gain victory points. Instead of using complicated bonus calculation, charts, or hands full of dice, SW uses a simple tile-counting mechanic to resolve combat. Players receive a number of tiles based on the race/special ability combo they choose. To take over an empty space on the map, you simply places 2 of your race tiles in that space. That’s it. Well, almost.

If the territory you want has one or more other objects in it (like a mountain, enemy tiles, etc), you must place an additional tile for every object in the space; for example, a space with 1 mountain and 1 enemy tile would take [2 + 1 + 1] = 4 of your tiles to conquer. Once you’ve placed all of your tiles, your turn is over (if you have tiles left over but not enough to take over a territory outright, you can roll the Reinforcement die to attempt to take over one territory before your turn ends). You gain 1 Victory Point for each territory you control at the end of each of your turns.

On following turns, you leave a single tile in each of your conque 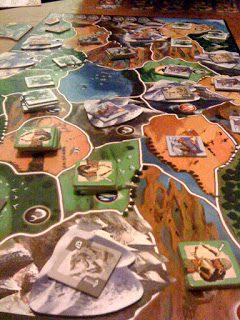 red territories, then use your remaining tiles to conquer new spaces, spreading out across the map. The catch? After a few rounds, players will find themselves low on tiles and unable to conquer new territory. That’s where the fun starts.

When you run short on tiles and can’t conquer any more territory, or when you find it strategically beneficial, you can put your race “In-Decline” by skipping your attack, leaving only one tile in each of your spaces, then flipping those tiles to the dull-gray side. [The Ratfolk to the right are In-Decline, while the Gypsies and Wizards are Active].

In-Decline tiles cannot attack (unless you are playing the Ghouls, who continue to attack because…undead). On your following turn, you select a fresh race and start taking over territories just like you did with the first race. You collect victory points from the territories of your new race and your In-Decline race as well. Deciding when to put your active race into decline is a key to any game of Small World, especially because you can only have 1 race In-Decline at a time. If your Active race is decimated and you put them In-Decline, your previously In-Decline race goes away.

Set up takes 2-3 minutes. The first game or two will take longer as players learn the special abilities and racial powers; there are handy cheat-sheets to help. Also, once you learn a power, the graphics on each of the races and special ability tiles are designed as a reminder.

The different boards also force different strategies. For example, the Tritons’ special ability allows them to take over any territory that boarders the lake or ocean for one less tile, allowing them to cut a swath across the smallest board, while special abilities like Flying are more beneficial on the larger boards.

Once players are familiar with the powers, turns are fast and a 2-player game can be finished in 15-20 minutes. Replayability feels limitless, though expansions add new races and abilities that bring noticeable freshness after your 30th or 40th game.

Small World is one of those rare games that delivers what it advertises: fun for 2-5 players, ages 8+. I’ve played with my 9-year-old nephew, and friends in their 50’s. I play 2 player games with my wife and 5 player on game nights. It doesn’t matter how many players or how old they are, Small World delivers a fun, fast-paced game every time and is a cornerstone of our collection.

A few notes on Wil’s game:

Please remember to support your Friendly Local Game Store (FLGS) whenever possible. Many FLGSs have demo copies of their most popular games. They may also have game nights, tournaments and open demonstrations as well.