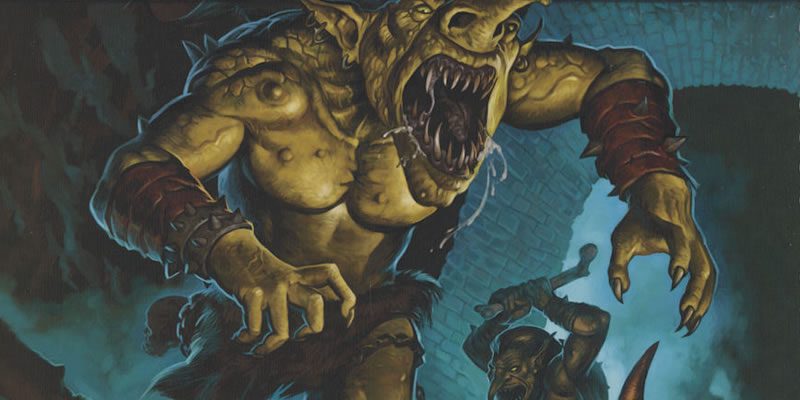 In the early days of Dungeons &Dragons the most dreaded of monsters at early levels was the Troll. The troll was unpleasant, obnoxious, and often solitary, but most of all, it regenerated. And it was the first that we encountered (or set up) that regenerated. No matter how many times you hit it, damaged it, cut off limbs, and even thought you killed it, it would always slowly and ominously regenerate hit points, reattach limbs, rise up and attack again. It would eventually injure and abuse your party to the point of retreat or even death.

Trust me, when new and veteran players encountered a troll, they were scared and often at a loss, trying to figure out how to permanently vanquish it. For even when you sever the body parts of a troll, the severed limbs, and head, would continue to fight and claw its way back to its owner’s torso, only to reattach themselves and regenerate. Eventually, through happenstance or a DM’s sympathetic nudge, the players would learn that fire damaged a troll permanently and although still extremely dreadful, players didn’t feel as if certain death was nigh when they encountered a solitary troll.

So like any good Dungeon Master would do, when we included trolls we upped the ante and created troll lairs with multiple trolls or even troll communities with scores of trolls that players would have to vanquish to complete the quest. In fact, throughout the 1990’s and 2000’s it seemed trolls saturated the role-playing market as a standard enemy creature in every tabletop and video game cave corner. In addition, the troll’s innate resistance was weakened by adding acid as a permanent damage source. Weaker trolls and troll saturation made the troll passé for players, and once regeneration and sheer numbers no longer scared players, DMs moved on to other creatures like giants, purple worms, and dragons. Players had become well-educated (not only in games, but also in movies and television) in how to defeat them and before we knew it trolls were out – as any true obstacle to pit against players. I mean really? Who puts a troll in a dungeon anymore?

According to various sources, trolls of legend originated in Norse mythology and Scandinavian folklore. The Norse mythology claims trolls, or thurs, were magical or even witch-like beings that lived on mountaintops or in caves snatching one’s wealth, inviting storms, and swallowing the sun. In Scandinavian folklore, trolls were aged and dim-witted man-eaters with “beady eyes and bumpy noses” (http://trollmother.com/index.php/trollhistory), but they were supernaturally strong. Trolls seemed to be a symbolism of greed for they believed they owned everything including the forest, rivers and bridges, hence the tale of “Three Billy Goats Gruff” having to get past the troll whom is blocking passage across the bridge. It would seem that D&D’s definition of a troll is closer to Scandinavian folklore.

Dungeons & Dragons (5th Ed.) version of the Troll doesn’t blow the reader away; at first, is simply appears to be cut-and-paste from previous editions. But it does offer us a few things that make it a little more appealing as a legitimate obstacle: Regeneration +10 and Troll Freaks. With the 5th edition moderation of player power, standard trolls become a little more formidable, particularly when they regain 10 hit points at the beginning of every turn. That is a significant increase from 2nd edition’s +3 and 3rd edition’s +5; unfortunately, this is still offset by susceptibility to both fire and acid. Any adventuring party worth their salt will pack either or both in literal or magical form. This trait alone doesn’t make them feared monsters; however, when packed with the next trait, Troll Freaks, it makes them intriguing in the least.

Troll Freaks is one of the more interesting inventions of 5th edition and appears to be a product of modern science and basic genetics in the public consciousness.

“Troll Freaks. Their regenerative capabilities make trolls especially susceptible to mutation. Although uncommon, such transformations can result from what the troll has done or what has been done to it. A decapitated troll might grow two heads from the stump of its neck, while a troll that eats a fey creature might gain one or more that creature’s traits.” (D&D Monster Manual, p. 291).

This means that with the danger that they already pose with regeneration and feisty severed limbs, now they can take on extemporaneous mutation, such as the two heads example, or grow wings after they eat the wizard’s owl familiar. Although it would be rare – for DMs that typically means 1 in 10 – the spontaneity could prove challenging to players and quite entertaining to all.

In addition, in reviewing the origins of the troll one could also surmise that trolls are much more powerful than small clans of dim wits. In the mythological rendition, a troll would be more of a manifestation of humanity’s fears: calling storms, stealing one’s wealth (or children), or striking in the dark. So adding a spontaneous trait or two to a troll makes it far more powerful. This makes the use of trolls a judicious placement rather than simply populating a swamp or an underground cavern full of them.

Perhaps a troll could be a gatekeeper that the player’s must pass either through cunning or force, with force being the less desirable option. In games that take a more hack-and-slash approach, the DM may want to make trolls sly hunters that stalk the shadows and cave walls, always skulking out of sight, like the fearsome alien in the ‘Alien’ movie series. If you want to make your trolls more mystical than feral man-eater, then grant them psionic powers or spellcasting abilities that allow them to call storms, conjure great winds, call lightning, or suddenly appear and strike from behind.

I think trolls just got their sexy back.

[Tribality Editor]
“You can view an excerpt of the Troll from the D&D Monster Manual here: http://initiativetabletop.files.wordpress.com/2014/09/dnd-5th-troll.jpg “

Blowing up your Campaign: Pyromancers for 5e ...