Holy Waters: Oath of the Waves Paladin for 5th edition 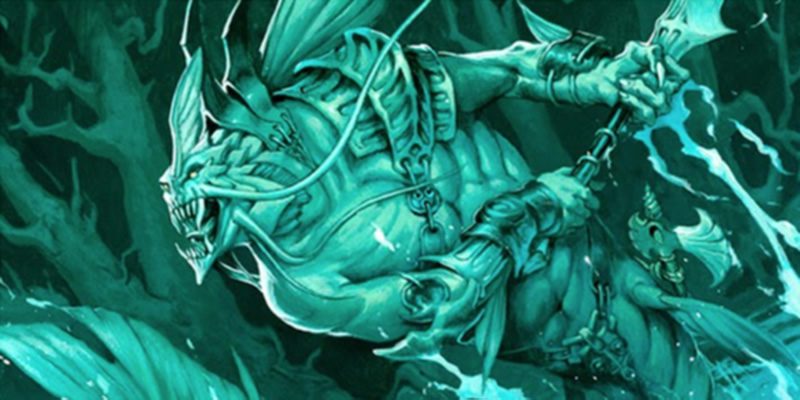 The fight against corruption and evil doesn’t stop at the shoreline. Paladins who follow gods of the ocean, such as Poseidon, or who are born among marine races, often follow the Oath of the Waves. As with other marine classes, aquatic paladins focus on training with piercing weapons such as spears, tridents, and short swords, as well as crossbows. Their armor is rarely made of metals, unless they are enchanted. Instead, their armors are composed of unique species of leathery seaweed, scales, chitinous plates, and shields made of turtle shells. Those few aquatic paladins that rely on mounts choose large predators such as sharks and killer whales, or rarer beasts such as giant sea horses and hippocampi.

Oath of the Waves

Bounty. Food and water are the cornerstones of life and the ocean is generous. I will not overlook starvation or thirst without compassion for those who suffer.

Freedom. Of all evils, slavery of mind and body shall be fought above all others.

One World. Waters are the foundation of life. Through travel and experience, I will learn all I can about the cultures of the world. Only through knowledge and understanding can good root out evil.

The Unnatural Shall Not Fester. Aberrations and undead must be destroyed beyond all resurrection lest their evil infect the world.

When you take this oath at 3rd level, you gain the following two Channel Divinity options.

Censure the Deep. As an action, you present your holy symbol and speak a prayer censuring aberrations and undead, using your Channel Divinity. Each aberration or undead that can see or hear you within 30 feet of you must make a Wisdom saving throw. If the creature fails its saving throw, it is turned for 1 minute or until it takes damage.

A turned creature must spend its turns trying to move as far away from you as it can, and it can’t willingly move to a space within 30 feet of you. It also can’t take reactions. For its action, it can use only the Dash action or try to escape from an effect that prevents it from moving. If there’s nowhere to move, the creature can use the Dodge action.

Charged Weapon. As an action, you can imbue one weapon that you are holding with either electricity or bitter cold using your Channel Divinity. For 1 minute, you add twice your Charisma modifier to the damage rolls with that weapon (with a minimum bonus of +2), and the weapon’s damage type becomes either cold or lightning in addition to the bludgeoning, piercing or slashing of the charged weapon. If the weapon is not already magical, it becomes magical for the duration.

You can end this effect on your turn as part of any other action. If you are no longer holding or carrying this weapon, or if you fall unconscious, this effect ends.

At 7th level, you can use a bonus action to grant yourself blindsight to a range of 15 feet until the beginning of your next turn. If you are underwater, this range increases to 60 feet. As this ability is based on hearing, you may not use it if you are deafened. If you already possess blindsight based on echolocation, the range increases by the distance listed above.

At 15th level, you can use your action to emit a concentrated blast of sound. Creatures within 5 feet of you must make a Constitution save or take 3d8 thunder damage and be stunned until the beginning of your next turn. A successful save results in half damage and prevents the stunning. The range increases to 10 feet while underwater. You may use this ability a number of times equal to your Charisma modifier before taking a long rest.

If you wish, you may target a single creature within 10 feet with this ability. If you do, the creature gains disadvantage on the saving throw. The range increases to 20 feet while underwater.

Form of the Leviathan

At 20th level, you can assume the form of an ancient force from the deep, taking on an appearance you choose. For example, your skin might turn blue-green or become scaled, you may grow multiple tentacles or your legs may become fused like a whale or shark.

Using your action, you undergo a transformation. For 1 minute, you gain the following benefits.

Developer Notes: After playtest feedback, the Form of Leviathan cap power has been adjusted from its original appearance at www.gameschangelives.com to: