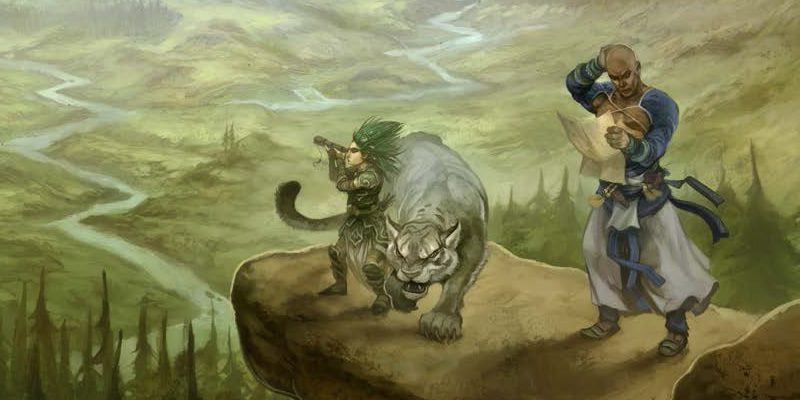 Like most skills in modern role playing games, ‘survival’ is something of a catch-all (though not so much as that most rolled skill in Pathfinder and Dungeons and Dragons 5e – Perception). This is totally fair; too much granularity gets in the way of fun. Basically, the ‘survival’ skill (in conjunction with perhaps ‘knowledge nature’) is utilized for doing ‘outdoorsy’ stuff; tracking, avoiding the worst effects of inclement weather, and whatever. More often than not, someone should have it to track the bad-guy through the forest, but other than that it won’t come up.

Which is too bad, because a character skilled in Survival would be able to do amazing and interesting things.

So what should the survival skill actually cover? How can players (and GMs) make better, more interesting use of it?

To say someone is skilled in survival means that; in absence of other people/civilization, in a particular region, a person is likely to be able:

Of these, building a fire is perhaps the most universal – the other skills are hugely influenced by region. To have survival skills in the real world is limited by area: cold weather survival and desert survival are two almost entirely different skillsets and the relation between them is more related by mindset than actual carry over of pragmatic approaches to the challenge of surviving without assistance.

Lets assume however that you don’t want to break up ‘arctic survival’ (wherein building improvised shelters out of snow is incredibly important) from ‘saharan survival’ (where not getting lost in a sandstorm, or dying of heat stroke is important) from ‘urban survival’ (trapping rats and pigeons with an increased importance on being able to disinfect and filter water); there’s just one ‘survival’ skill skill to rule them all. Now that we have a general shape of what ‘survival’ covers, let’s look at some ways it can be utilized.

Ways to Use the Survival Skill

We already mentioned a few, and the places where they overlap with ‘Survival’: craft traps, perception, knowledge nature. But then there are so many skills related to real world survival that don’t get talked about nearly enough. Things like ‘sewing’ are essential is actually surviving it’s one of the most essential medical technologies and absolutely vital to keeping clothing functioning (clothing itself might range from ‘optional’ to ‘essential’ depending on environment).

But you have to cut it off somewhere, or else everything is survival skill (I need to *see* in order to survive, so anything related to acquiring and interpreting visual data is part of survival right?).

To reiterate, for the sake of simplicity just assume that a character skilled in survival can: find food & water, and avoid death from exposure when they are in the ‘wilds,’ and justify every permutation that comes from that.

Anyway, that’s my initial thoughts on the Survival skill. What interesting ways have you used the survival skill? Sound off in the comments, and be sure to click those share buttons on the left!