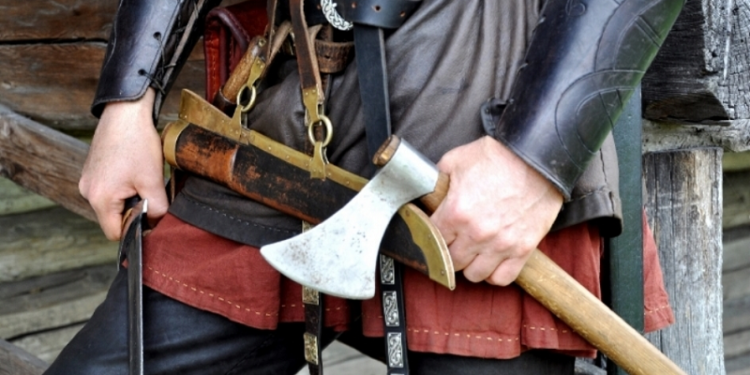 I like playing characters with ranged combat potential. Playing a sniper or run-and-gun style can be an awful lot of fun. However, I also like playing the zone control mid-range combat character that relies less on bows and and leans more heavily on stuff like javelins or throwing axes. It’s a shame that it’s often very hard to make this second concept work as fully as it might otherwise. I get it, I really do. Having infinite throwing axes isn’t super reasonable, nor is buckling down on the concept but only having 6-10 attacks with your preferred method of engagement. It’s a tough row to hoe. However, once you get magic into the mix things get a lot easier to support. To that end, let’s check out seven magical ranged weapons that aren’t bows.

This seemingly-crystalline javelin is found tied with a rope of braided black horse hair, resting inside of a sheath made of rough green leather. The javelin is inscribed with fragments of folktales from different cultures, written in Sylvan and Infernal.

You gain a +3 bonus to attack and damage rolls made with this javelin. It has the following additional properties.

Impaling. The weapon damage of this javelin is 1d8 piercing damage, instead of 1d6 piercing damage. Additionally, whenever this weapon hits a creature, it remains lodged in them – requiring a DC 19 Strength (Athletics) skill check to remove Naulata from them as a bonus action.

Replenishing. Whenever Naulata leaves your possession, a new one instantly appears in your sheath. Thrown or discarded nails vanish at the start of your turn, unless they are currently impaling a creature.

Remnant of Malbolge. As a bonus action, you may cause any creature currently impaled by a nail to make a DC 19 Dexterity saving throw. On a failed saving throw, the creature suffers 1d12 lightning damage for each nail impaling them, or half as much damage on a successful saving throw.

Malagard’s Will. As a reaction to taking the attack action, you may cast true strike. If you choose to do so, roll a 1d8. On a result of an 8, you must succeed on a DC 19 Wisdom saving throw or become affected by geas cast using a 9th-level spell slot. This geas is a manifestation of the deposed devil Malagard’s desires and goals.

Sentience. Naulata is a sentient lawful evil weapon with an Intelligence of 16, a Wisdom of 12, and a Charisma of 18. It has hearing and darkvision out to a range of 120 feet.

The weapon can speak, read, and understand Common and Sylvan, and can communicate with its wielder telepathically. Its voice is soft and melodious. While you are attuned to it, Naulata also understands every language you know.

Personality. Naulata speaks with confidence, attempting to convince the wielder of its position.

The javelin’s purpose is to enact the desires of Malagard, even if she is currently deceased. It seeks to free her Malagard’s nightmare, overthrow Glasya, and restore Malagard to life. Naulata  doesn’t believe in cruelty for the sake of cruelty, but seeks to ensure those who break deals are punished, and laws are appropriately enforced. Naulata is especially vocal about punishing those who break promises. Unfortunately, Naulata often interprets many actions as being violations of laws, deals, or promises.

The first time each day its wielder attempts to break a law, deal, or promise – or allow someone else to do so without being punished –  a conflict between it and its wielder occurs immediately.

You gain a +1 bonus to attack and damage rolls made with this magic weapon.

Cauterizing. This weapon deals an additional 2d6 fire damage on a hit. Additionally, you may spend an action to stabilize a creature that has 0 hit points.

Harangue. When you take the attack action with the haranguing hatchet, it remains in flight until it it finishes making all of the attacks granted by your attack action, at which time it disappears and returns to your hand.

Ricochet. As an action, you can cause the haranguing hatchet to bounce between enemies who are grouped together. Choose a creature within the hatchet’s range. The target must succeed on a Dexterity saving throw (DC 8 + Your Dexterity or Strength Modifier (your choice) + Your Proficiency Bonus) or suffer 3d6 + Dexterity or Strength Modifier (your choice) fire damage, or half as much on a successful saving throw. If a creature is within 5 feet of your target, you may choose to have the hatchet bounce to this creature, causing them to repeat the Dexterity saving throw, with the initial damage increasing by 1d6.

You may continue to have the hatchet bounce to additional, unique creatures within five feet of each other, increasing the initial damage by an additional 1d6 for each bounce. When the hatchet may no longer bounce to a new creature, or if you choose it to not bounce, it returns to your hand.

Once you have used this property, you may not do so again until you clean and sharpen the blade of the hatchet, and let the blade rest over an open flame for at least one hour.

You gain a +1 bonus to attack and damage rolls made with this magic weapon. Additionally, this weapon deal an extra 1d6 psychic damage to any target it hits.

As a bonus action, you may expend two charges to cause the next successful hit with this weapon to cause the creature hit to succeed at a DC 15 Constitution saving throw or suffer two levels of exhaustion.

As an action, you may expend five charges to cast a DC 15 phantasmal killer using a 6th-level spell slot.

The sling regains 1 expended charge after being submerged in common red wine for 8 hours. The wine is consumed by the weapon, and leaves no mark upon it. If wine is fine red wine, it regains 1d4+1 charges, instead.

This weapon deals an additional 2d6 piercing damage to any target it hits when thrown.

As an action, you may make an attack against up to three creatures – none of which may be more than ten feet away from another creature you are attacking with this action. This attacks deals 1d8 + Your Strength or Dexterity Modifier (your choice) piercing damage on a successful hit, and does not deal the additional piercing damage this weapon normally deals on a hit.

You gain a +2 bonus to attack and damage rolls made with this magic weapon.

While the blade is made of moonlight, you may make ranged attacks with this weapon. The range of these attacks is 30/60 and the attack and damage rolls use your Strength ability modifier, and deal radiant damage.

When you critically hit with a ranged attack, the creature hit and creatures within 5 feet of it must succeed on a DC 15 Strength saving throw or be knocked prone.

This weapon does not require ammunition, but instead uses darts of force. You do not need to load the blowgun after firing a dart, as a new one instantly appears. These darts may be poisoned as if they were normal darts.

These darts deal an additional 2d10 force damage to incorporeal undead such as ghosts or banshees.

These magical weapons appear as like any other weapon of their type, but expand and whir to life when commanded.

As a bonus action, you activate the hidden gears and gizmos within the weapon, granting the weapons a reach of 15 feet.

Once you have used this reaction, you may not do so again until the weapon has had 24 hours to realign its inner workings and build up another charge.