The Kindest of Sharks: Sahuagin (Salenti) for 5th edition 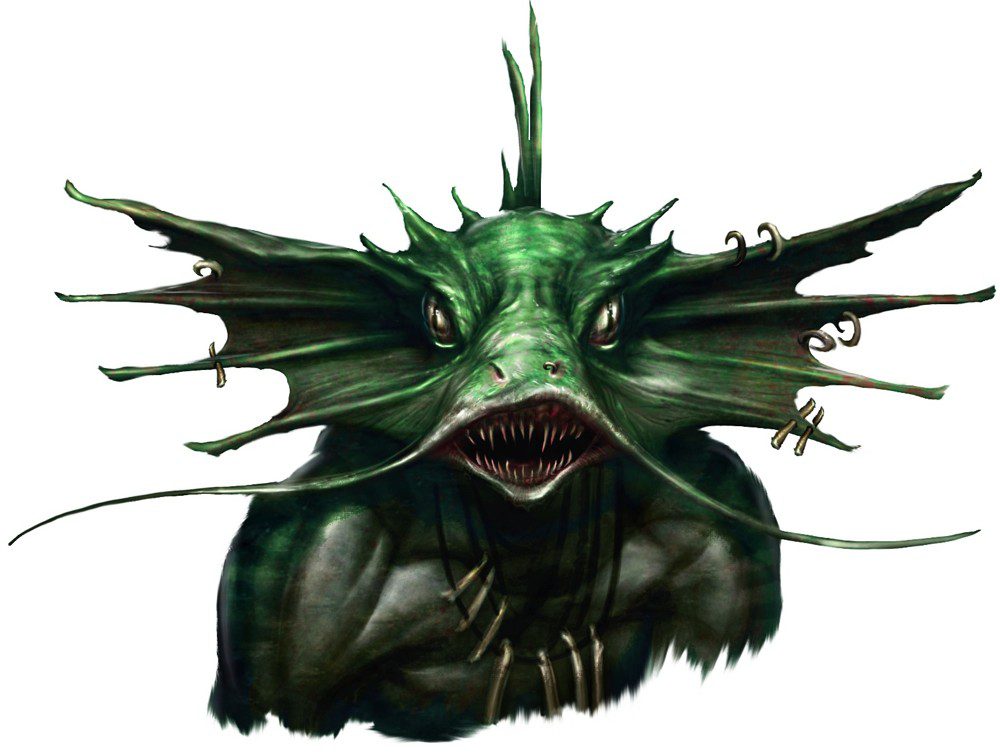 Sahuagin are as focused, tenacious, and predatorial as the sharks they ally with. What few outside a dedicated group of sea elves know, is that sahuagin have an even deadlier secret. When living near sea elf communities, a lucky few (according to the sahuagin) are born a malenti. Malenti hold sahuagin thoughts and ideals in the physiology of (what appears to be) an ordinary sea elf. Malenti are the intelligencia of sahuagin communities and are often used as secret agents within civilized communities. What few non-sahuagin know—and no true sahuagin will admit—is that sometimes the reverse happens.

While malenti are born with the appearance of a sea elf and the malevolent soul of a sahuagin, the salenti are born with the vicious appearance of a sahuagin, but a sylvan mind and soul. No living salenti will ever admit their beliefs to their community for fear of being killed, and to leave in pursuit of their own ends often leads to the same fate at the hands of “civilized” races. Therefore most salenti suffer a quiet hell, waiting for the day their secret is discovered.

Rarely, though, a salenti will leave their community, often during a battle where they will be assumed dead. They will find an isolated home far from their kin and establish a community of animals that see them for their kindness and not their external appearance. Even more rarely, these salenti will be discovered by a group of adventurers or civilized explorers and be convinced to join them in the greater world.

Ability Score Increase. Your Wisdom score increases by 2, and your Strength score increases by 1.
Age. Salenti have the same lifespan as a sahuagin, reaching maturity at 16 and living nearly a century.
Alignment. Salenti find themselves in conflict with their brethren on a number of levels, the most fundamental being their desire for freedom and kindness. The majority of salenti are both chaotic and good. Some may be neutral or even lawful but, by definition, salenti are never evil.
Size. Sahuagin range from 5’-7’ in height. Your size is Medium.
Speed. Your walking speed is 30 feet; you have a swim speed of 40 feet.
Darkvision. You have darkvision to a range of 60 feet.
Aquatic Empathy. Though salenti do not enter the same blood frenzy as their kin, their empathic powers reach far beyond simple-minded sharks. They have learned to exert some control over the predators to keep their secrets safe, and befriend other creatures who are at times their only companions. You can telepathically speak with any marine beast within 120 feet of you.

In addition, choose one group of marine beasts: cartilaginous fish (sharks, skates, rays), cephalopods (octopuses, squids), bony fish (quippers, sailfish, lamprey), or marine mammals (dolphins, whales). When you communicate telepathically with a member of the chosen group, you may use an action to force the creature to make a Wisdom save against a DC equal to 8 + your proficiency modifier + your Wisdom modifier or become charmed for 1 minute. The charmed condition ends if you deal damage to the creature or if you use this ability on a different creature.

Salenti who live among their kin choose to connect with sharks to keep their internal life secret, though the rare salenti who wander into the world often train themselves to befriend other beasts. At your DM’s discretion, you may retrain yourself to link with a new group of marine creatures over time.
Limited Amphibiousness. You can breath both air and water. Unlike malenti which have the physiology of a sea elf, salenti suffer the same limitations to being out of water as a normal sahuagin. You must submerge yourself every 4 hours or begin suffocating.
Languages. You speak, read and write Aquan as well as one other language (typically Common or Sylvan)

Of course, the aquatic cleric, paladin, sorcerer, fighter, druid, and ranger archetypes from the Aquatic Builds series are all available to salenti, as are bards from the College of the Sea Singers. Salenti tend toward contemplative classes, such as druids and clerics, as well as warriors with a divine bent, such as paladins and rangers.

We’re always looking for playtesters for our races, classes, archetypes and other designs here at Tribality. Wizards had the benefit of 175,000 playtesters over 2 years to get their ideas to the table; clearly we don’t have that luxury. Each of our builds are as balanced as we can design with a small playtest group and over a century of gaming XP. We are always excited to hear when players get these ideas on the table and provide us with constructive ways to make them better.

Survivalist Gaming – The End of the ...