Survivalist Gaming – The End of the World 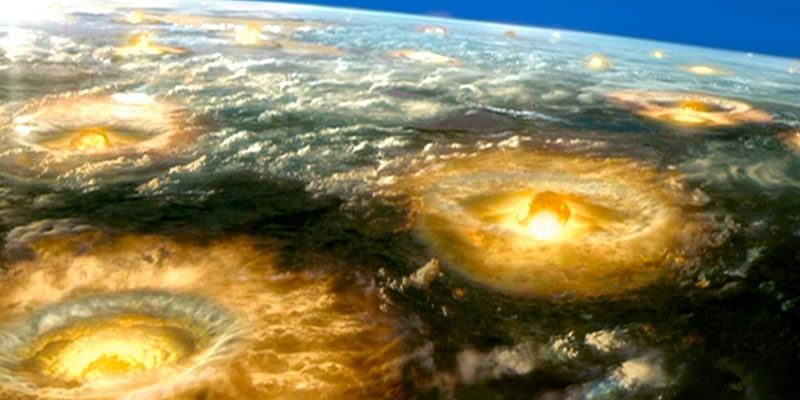 ‘When the sh*t hits the fan’ or ‘The End of the World as We Know It’ (TEOTWAWKI for short, or at least shorter) are phrases that get bandied about a lot in survivalist circles; they’re catch alls for the type of scenarios survivalists envision themselves handling. Every prepper has their favored (or perhaps most feared) version of the apocalypse and in this week’s survivalist gaming column, I want to talk about ‘The End of the World’ and how to incorporate or use it in gaming.

If you define ‘The End of the World’ as the end of all existence or an extinction level event for sentient organisms, then the End of the World has never happened for human beings. Also, there’s no use for it in stories or games except as a motivator as to what to avoid.

Imagine being a Roman citizen as the last legions have been smashed, or fled; as thousands of stinking tribesmen roam about your city taking what they want.

Any recently conquered city in ancient times (and most probably even in modern times) can be thought of experiencing an apocalypse.

The Ultimate End vs ‘An’ Apocalypse

Lazy storytelling (or, more generously stories that wish to spend their attention budget elsewhere) uses the ‘bad thing happens, *everyone* dies approach. Better, and more honest story telling would focus on, assuming a situation is surviveable someone (or a group of someones more accurately) will survive it. And the ways in which the characters survive, their struggles to acquire essential goods when formerly they could merely get them easily.

The whole thrust of survivalist thinking and survivalist gaming is this; that we once against share the essential struggles for necessities (protection, food, water, shelter) that took the majority of effort from the human species for most of its history.

End of the World as The End

There’s any number of sundry apocalypses that remove some essential from the equation (food, water, or air) but -as mentioned before- these apocalypses are really only useful as threat motivators – if any of them happen then the game is over.

End of the World as Societal Collapse

As these events are raging, destroying societies is a perfect time for gaming, because characters suddenly have an increased efficacy – whether they live or die is much more up to their own efforts (as opposed to aligning their actions with the rules, norms, and expectations laid out by their society).

Also, during the collapse of society brings the moral problems inherent in surviving while others perish into stark relief. In most stories, five years after the end of the world is time filled with our (basically decent, although perhaps somewhat grim) heroes and the ‘bad guys’ (morally repugnant, possibly insane, possibly canabalistic) others they must fight; everyone else has died. But amidst the apocalypse, this white and black mortality isn’t as well defined – people still see themselves as bakers, bankers, and beauticians – perhaps being tempted to do reprehensible things in order to survive in a changed world. More to the point, amidst the apocalypse there’s still the sense that someone or something can come along to rescue the old world, the world that was. Whether that’s true or not is entirely up to the GM and players, but -with gaming as well as traditional story telling- it’s best to make any rescue the results of the characters actions instead of an outside (unexpected) force.

Structure for Running a Game Around the End of the World

Basic structure for running an ‘apocalyptic’ game would be this; players start versed in the rules and strategies of one world; reliant on a system/society as deeply as Roman merchants in the days before the fall. The characters then, along with the rest of society face societal collapse – the end of the world as they know it. From there, they can scramble to restore the old order, found a new order in the chaos, or even merely to secure the essentials of survival. Finally, the characters enmesh themselves in the rules of the ‘new’ world, destroy the biggest threat, or restore some semblance of the old order (though better now, having the flaws that caused collapse removed).

Be sure to comment below on how you’ve used the end of the world in your games and -if you liked this article- be sure to share it!

The Kindest of Sharks: Sahuagin (Salenti) for ...