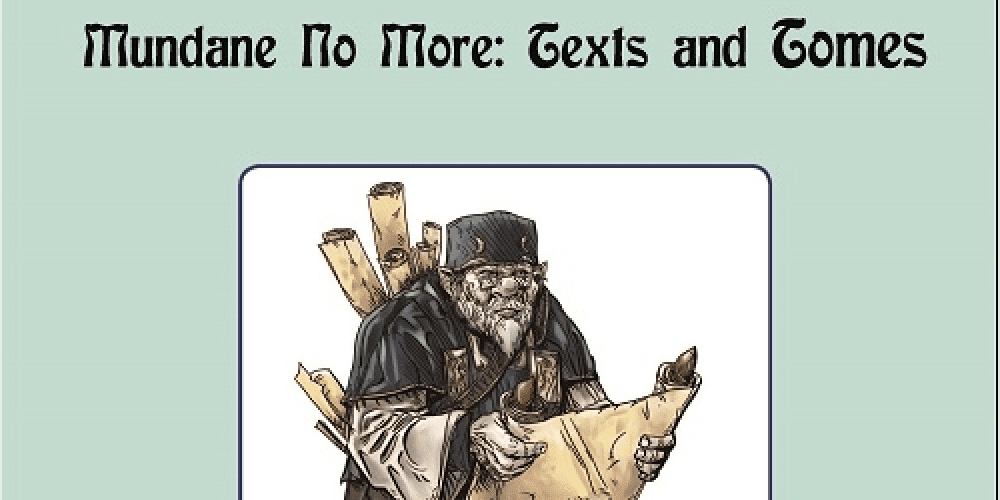 It’s probably not a surprise that I didn’t start gaming, or even designing, with 5th ed. As my bio says, I started gaming back in the Dark Ages of the 1970s and haven’t stopped. One of the things that always bothered me about most RPGs, and especially fantasy RPGs, was the handling of so-called “mundane” knowledge. I can’t tell you how many times I gritted my teeth as my party stomped through a lost library filled with thousands of years of knowledge, only to carry out the one magical text among generations of brilliance.

When I started designing professionally, one of my first projects was updating the system I developed back in 2000 to introduce non-magical texts into my d20 games. With the help of publisher/designer, Christina Stiles, and developer, Robert Hudson, “Mundane No More: Texts & Tomes” hit the virtual shelves. It’s been a book I’m particularly proud of, not only because it was one of my first self-authored projects, but because I’ve finally had the chance to do justice to those ancient libraries of my youth.

I’ve been banging around in my subconscious how to introduce the ideas from T&T and its two follow-ups, The Land’s Beyond and Psionic Repositories, into 5th edition for several months now, though I hadn’t thought about the actual product for a while. I was surprised when a colleague told me that a reviewer whom I have a lot of respect for recently gave T&T a wonderful review. I’m grateful to EZG both for the review and for pulling those ideas off the back-burner and into my sights again. It was perfect timing.

If you’ve been following my columns for fun new 5e material to use in your games or tweak for your own, I greatly appreciate that. If you’ve been hoping for something new for your v3.5 or Pathfinder game, consider checking out my first baby and giving it a spin.

I’ll put what’s been banging around onto the virtual page soon for 5e fans but, no matter which system you play, never forget that words are magic…whether or not they are magical.

The Kindest of Sharks: Sahuagin (Salenti) for ...