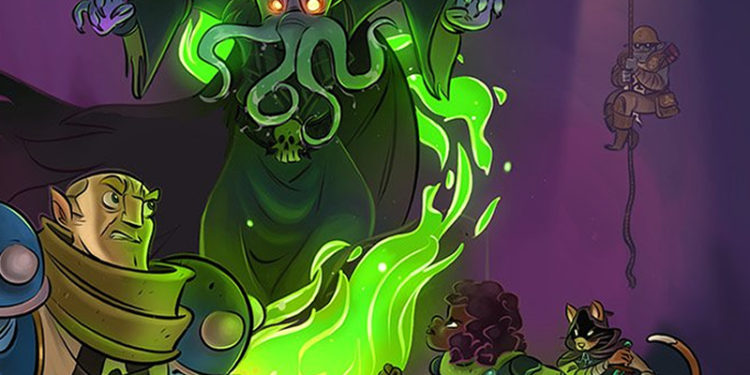 Earlier this year at PAX South, news was released that Penny Arcade has partnering with Wizards of the Coast (D&D’s Publisher) to release an official Acquisitions Incorporated Dungeon Manual. Now that PAX East is here we have more news. The book will be out on June 18, 2019, cost US$49.99, is 224 pages, and is available for pre-order at PennyArcade.com. Pre-orders will received a free Green Flame pin gift and there is also a DM Screen available for purchase.

The book provides a way to jump into the comedic fantasy superhero D&D live-play you’ve seen on the stages of PAX for a decade. Fans will be able to live out their fantasy of climbing the corporate ladder of the most notorious retrieval agency in the Forgotten Realms—Acquisitions Incorporated. Join CEO Omin Dran, Jim Darkmagic, Môrgæn, and the chandelier-riding Viari around the table as a lowly intern or a freshly-minted franchisee with the new Acquisitions Incorporated sourcebook.

“To tons of people around the world, the flavor of D&D played by the Acquisitions Incorporated crew was their first taste of just how much fun a Dungeons & Dragons game could be,” said Nathan Stewart, Senior Director of Dungeons & Dragons at Wizards of the Coast. “We wanted to start experimenting with presenting different playstyles to fans entering the D&D community, and it made sense to start with a group who has spent ten years at a table with Chris Perkins entertaining hordes of fans.”

“I’ve played Dungeons & Dragons my entire life, so collaborating with the team on this project has been surreal,” said Penny Arcade’s Jerry Holkins. “Acquisitions Incorporated is the game my friends and I have been playing for ten years, and I’m so honored to invite players to our table.” 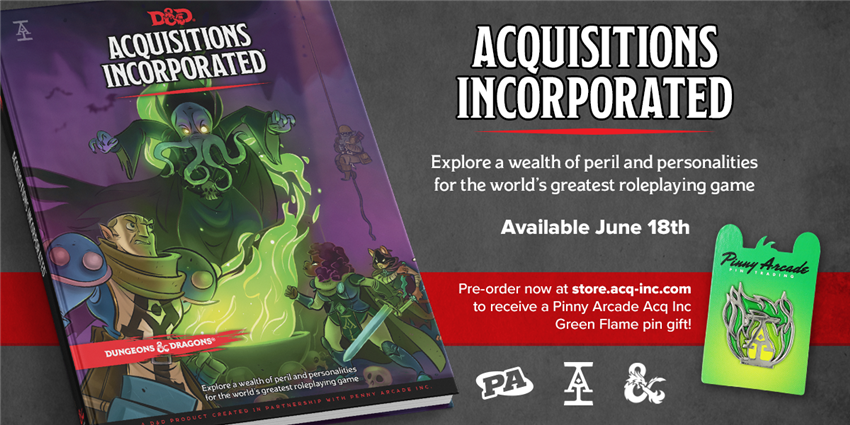 D&D Beyond has a detailed look at the upcoming Acquisitions, Inc. D&D sourcebook, and some nice preview art, such as this spread below. Their preview looks at the player options and DM options that included in the book. 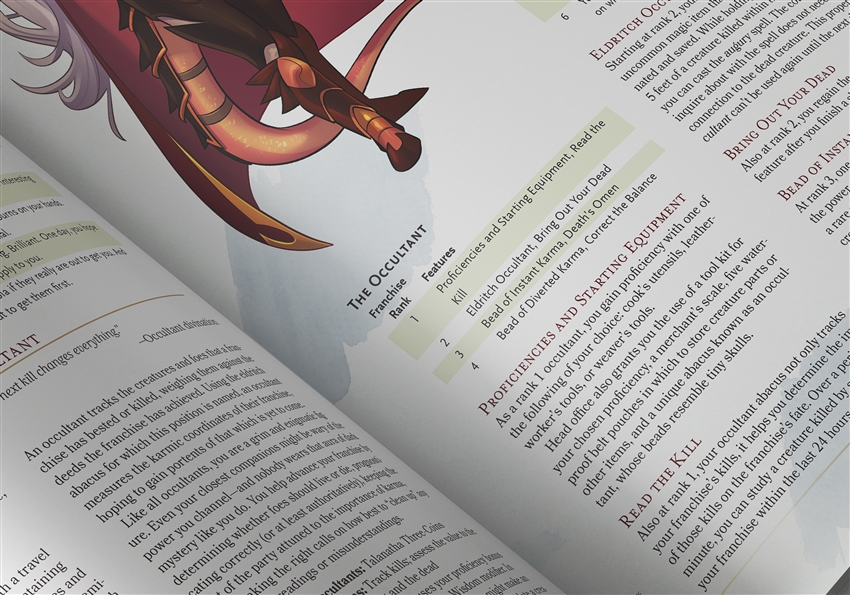 The 224-page book gives Dungeon Masters and players tons of options to make their game feel like an Acquisitions Incorporated campaign. Players get archetypes including the cartographer, decisionist, documancer, hoardsperson, loremonger, obviator, occultant, secretarian and a new playable race, the Verdan. DMs get a complete level 1-6 adventure and monster and NPC stat blocks, sure to include many that are familiar to fans.

Start up an Acq Inc franchise in Waterdeep or Elturel or anywhere in the multiverse, recruit a scion of the Beestingers to complete a messy task only a cunning halfling could accomplish, or stumble upon Jim Darkmagic’s clone burning with… uh, viridescent flame. There’s an adventure module included, and when they run it, Dungeon Masters are encouraged to act like Jeremy Crawford calling for a deception check from WWE Superstar Xavier Woods, while simultaneously channeling Chris Perkins to let dashing characters like Viari, played by fantasy author Patrick Rothfuss, get away with ANYTHING that sounds cool.

Read the full preview at D&D Beyond >