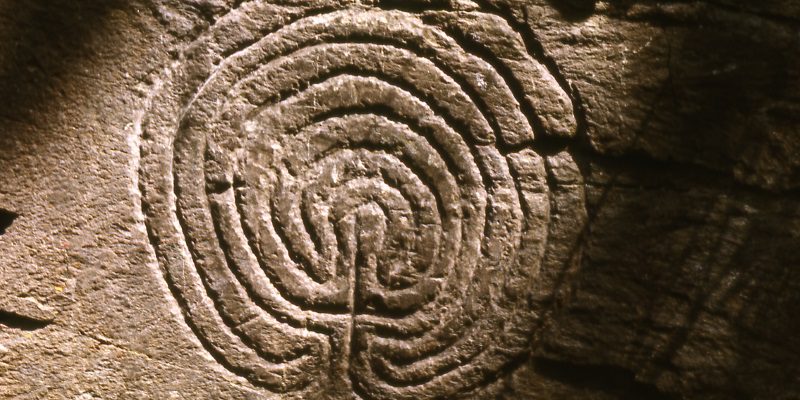 In my previous post on druids, we looked at how OD&D established a baseline for the class. Today, we’ll see that 1e doesn’t stray far from that, until we get into Unearthed Arcana’s revision of the class. The 1e version starts us off with some new descriptive text, spelling out the intent of the class as what the druids might have been like in a medieval fantasy version of our world in which they survived the Roman conquest.

The 1e version’s main difference is that it wedges another character level, with the level title “Ovate” (a brief thematic nod to the Celts, presumably not a description of a particularly rotund member of the class), between Aspirant and Initiate of the First Circle. The Druid accumulates abilities at the same level title in 1e as it did in OD&D, but that has been pushed one level later. The oddities (well, from present perspective) of the OD&D Hit Die progression, where sometimes the Druid gets just a hit point rather than a Hit Die for no obvious reason, are gone in 1e. Yet where other classes of 1e stop gaining Hit Dice at 9th or 10th level, the Druid gains Hit Dice at every level until it reaches its stingy 14-level cap.

So now we’ve got more alignments than just Lawful, Neutral, and Chaotic, and in the nine-alignment system, 1e Druids are always, always True Neutral. Given the rest of what it describes about a druid’s expected behavior, this is really strange to me – protecting the natural world and all that is in it, including crops (indicating a protection of civilized peoples as well as the wilderness), is pretty firmly in Good territory, especially since the druid does this without any obvious material recompense, just dedication to Nature. Nature is also red in tooth and claw, but the writeup here really directs attention away from that.

Characters of races other than human can now be druids, which is great. The entirety of that list is half-elves and halflings. I am dying to know why elves can’t be druids. Also surprisingly, half-elves have unlimited advancement as druids. This is the only U on the table for a demi-human race-class combination that doesn’t include Thief or Assassin. For reasons truly beyond my grasp, the table goes on to explicitly state that halfling druids are limited to 6th level and must be NPCs. I sincerely assume that the rule restricting some race-class combinations to NPCs was observed primarily in the breach.

Digression: Did any of 2e’s settings ever explain why elves couldn’t be druids? In 3.x and 4e, the quintessential druid is an elf.

The only change to the Druid level-advancement dueling at the top end is that there are now nine 12th-level Druids (level title: Druid – screw you, lazy writer) and three 13th-level Druids (Archdruids) in the world, rather than four and two.

It occurs to me that if I were running a game with a druid PC and I wanted to tell stories about the limited top-end hierarchy, I’d probably have a natural disaster conveniently wipe out one of the 12th-level and one of the 13th-level Druids, right as the players was ready to advance to 12th. The Great Druid then elevates the PC to the empty seat while assigning her the quest of fixing the problem that killed her predecessor. No duel, and a presumably high-pressure quest? Sounds great, let’s do this. Also, that might make it a seat on the Druid Supreme Court that no one wants to challenge ever again. (It’s not until Unearthed Arcana that you can’t expect to just wait for the druid to die of old age.)

Anyway, there’s one more incredibly weird thing I have to point out: the experience points required to advance. I’ve compared them to both the cleric and the thief for this. Druids start out fairly slow, requiring the most XP of those three classes, but there’s an odd hiccup in the 4th to 6th level range. This is the point at which many characters need to double their XP total so far in the campaign to reach each new level, or something close to that. Not the Druid, though! At 5th level, the Cleric suddenly requires more XP to advance than the Druid does, and this remains true until 14th level (the XP jump from Druid 13 to Druid 14 is indeed double all previous earnings, which is mighty steep). The Druid and the Thief require the same XP total to reach 6th, which is striking because the Thief is so noted for its very fast level advancement in 2e and earlier editions, and thereafter the Druid advances faster than the Thief all the way through 13th level. The Druid’s XP jump from 12th to 13th is actually more than double – 150% – but the XP requirements up to that point have been so incredibly low that it’s still playing catch-up compared to other classes.

I have to wonder what the thinking here was, other than retaining an oddity of OD&D. Is this intended as a partial patch on all the XP the Druid is going to lose if she loses any of her advancement duels – or if someone comes along later and successfully challenges her in an advancement duel? (Which can nominally happen, but I really wonder if any DMs ever did this.) I’m pretty sure Druids still receive XP for gold in 1e as other classes do, but these rules would have just about made sense if druids didn’t, and their fast advancement was a sop to all the XP they missed out on. My final rationale here is that this is really interesting if you’re thinking in terms of 1e and 2e late-game play, where players advance slowly and spend a ton of time managing lands or organizations – it maximizes the time spent at the levels with the most compelling gameplay.

Finally, the spellcasting rules of 1e explain the whole thing with the mistletoe and the golden sickle, and it’s quite punitive – the only way a druid gets the listed effectiveness (range, duration, area of effect) out of her spells is to use mistletoe that can only be harvested one night out of the year. It’s 1e, so there’s no guideline as to how many uses of greater mistletoe a druid could harvest in that time. Otherwise, the player needs to get used to taking 25-50% off of every spell’s range, duration, and area of effect, and/or the spells being easier to resist.

So about animal friendship. This first-level spell, basically unchanged from 1e to 2e, allows the druid to befriend beasts of up to 2HD per caster level, and the druid can teach them up to three tricks. Buried in the description of one spell out of the druid’s whole list, we have a massively powerful class feature that more or less gives the druid one or more additional actions in combat. It’s a lucky thing they hid this major class ability, because its use bogs the game down and makes the druid basically twice as powerful as any other character of their level.

In total, the Druid class of 1e is either deceptively powerful, with its remarkable number of hit points, animal friendship, and fast advancement track, or deceptively weak, with its spells that are consistently less effective than listed. The DM is pretty much the deciding factor: how often does the Druid lose XP because she gained more XP in a single adventure than allowed? How hard does the DM make it to harvest the needed amount of greater mistletoe (if the DM enforces that rule at all)? That is three big things in the Druid’s favor, though, so I’d venture to say that in the balance the Druid is a powerhouse.

This book finally admits that having only fourteen levels in your character class is kind of bullshit, and expands the Druid to an open-ended advancement class, just like everyone else. It adds a rank in the hierarchy above Great Druid, called the Grand Druid, which grants substantial additional spellcasting power. Logical progression, sure! Also that XP jump is vast – 1.5M XP is serious business and more than three times longer than any other 1e class spends at any level. Then everything changes.

When one has been the Chief High Grand Pooh-bah Druid for another half-million XP, the Druid’s XP total resets to 1 and she begins life as a Hierophant Druid. This costs a little bit of the bonus spellcasting power Druids get for being the Grand Druid, but they start picking up additional class features at each level:

UA also introduces new spells, of course – what kind of splatbook would it be if it didn’t? – and there’s an interesting bit of thematic expansion for the Cleric and the Druid here, heightened by contrast. Both classes receive a ceremony spell, but the two versions have slightly different effects. The spells emphasize the societal role of Clerics and Druids, in their respective communities. The differences – Ordination vs. Initiation, Burial vs. Rest Eternal, Consecrate Ground vs. Hallowed Ground, Anathematize vs. Cast Out – all seem significant.

UA’s expansion of the Druid is probably the best change that the book makes to any class. Many of the other updates or new classes are… sort of a mess, but the UA Druid is very close to the version that endures into 2e, and 3.x retains several clear influences from it. Next week, I’ll dig into the details of that ongoing development.