I started to put together some Star Frontier monsters that can be used for a D&D 5th edition – Star Frontiers Campaign. I stated first with a creature that you should find interesting.  It is really big and scary, 65 feet long, and is able to hide and sneak attack the player characters.  It was the Slither, so I tweaked it a bit, but kept the same flavor. I first started by using the Purple Worm layout, but soon found ideas from several other monsters in the Monster Manual.  I stayed focused on the origional listing of Slither’s abilities: 1. surprise, 2. chemical burn touch, 3. tentacle attack, 4. a bite attack, 5. tentacle grapple. and 6. multi-creature attack, and added some legendary actions to the creature. So here is the Slither: 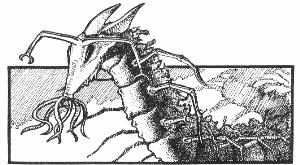 A slither is 65 feet long and 6 feet wide. It resembles a giant-sized cross between a worm and a centipede. It is part plant and part animal; plants grow from its back, providing camouflage and some nourishment from photosynthesis. It can only see moving objects, but can sense salt and water. One often lurks near pools of water or salt licks, waiting for prey.

When lying still, a Slither is often mistaken for a mound of plants, allowing it to attack with surprise. Its gnashing, grinding mandibles are surrounded by 2-meter-long tentacles. Slithers also secrete an oily fluid that causes burns on touch. They attack by lashing out with their tentacles, by biting with their jaws and by coiling around prey and burning it with their secretions. They must re-coil and make a new attack roll each turn to coil about prey. A slither can attack two creatures on the same turn, one with its tentacles and bite and the other by coiling around it. This makes them very deadly in combat.

The slither is very strong, but with a party of mid-level adventurers, they should be able to take it out fairly quickly.