World Building – Part 2: A History for Your World 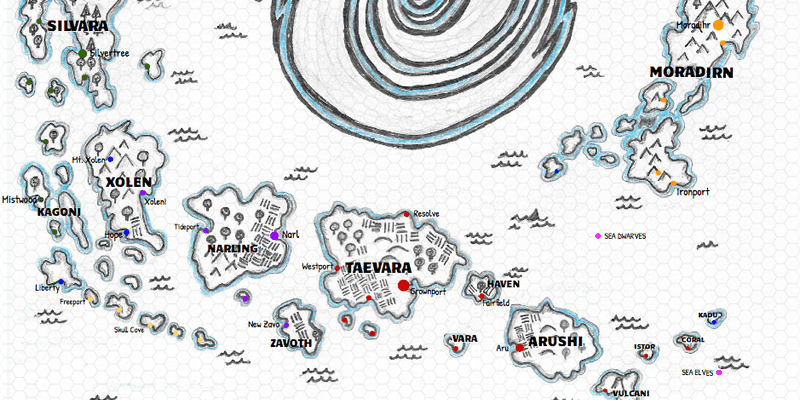 Atlantis, Westeros, Wonderland, Neverland, Oz, Panem, Camelot, Discworld, Barsoon, Pern, Shannara, Middle-earth, Narnia and countless other fantasy worlds provide the backdrop for adventures. Your tabletop RPG adventures deserve a setting with a rich and detailed history. Last year, I decided it was finally time to tackle building my own fantasy world and in this article (Part 2), I share how I developed the history of Vodari.

Some people like to start building out a campaign world with a map. I drew a map pretty early on, but I first started by brainstorming all the different types of campaigns I wanted to run. We were running a game set in the Nentir Vale at the time and it would be a welcome change to move away from goblins, kobolds, gnolls, orcs and red dragons. I looked at Guardians of the Galaxy, Maleficent, Noir, Hunger Games, Star Wars, Star Trek, Three Musketeers, Pirates of the Caribbean, Aquaman, Legend of Korra and more for ideas. A few pages of notes later, I decided on building out a world where a small continent was destroyed leaving scattered islands that the few survivors of this cataclysm colonized. I called this world Vodari.

TIP 1: Look at other languages to swap out words to add to the foreign/exotic feel of your world. Tolkien borrowed from Norse, Celtic, Anglo-Saxon and Finnish mythology and even went so far as to create his own languages for Middle-earth.

Vodari comes from the word ‘voda’ which is water in a number of languages including Russian and Ukrainian. I found words that matched the domains for my gods:

I mapped out the history before the godwar, but the godwar is the zero year event in Vodari. I set my campaign nearly 1000 years after the godwar, with civilization fully established again on the scattered islands of Vodari (I parked any ideas for campaigns set in the past on a small Pangaea-like continent). This is the short version of the myth from 1000 years ago.

Long ago Taeva and Vesi, two sister gods, fought a great war for the heavens when the Great Father died. After millennia of fighting, the war spilled over into Vodari. In order to save the mortals, their brother Tero stood between their two armies, begging for an end to the conflict before it destroyed Vodari. Listening to her brother, Taeva had her army stand down. Unable to contain her rage, Vesi created a massive storm that blasted her siblings without mercy and buried most of Vodari under the seas. Defeated and injured, Taeva retreated to the sky. Realizing the extent of the destruction she caused, Vesi withdrew into the vast storm she created to brood for eternity. Barely alive, Tero called upon the last of his strength to create the islands and watch over the survivors.

TIP 2: Your job is not to write an encyclopedia, you only really need to create enough detailed history to support your campaign and make the world feel lived in.

Most campaigns don’t need more than a page or two of history at the start of a campaign, but revealing more more about the world’s history as they travel in it will be appreciated. With less history, you’ll be more flexible and able to let your players help create the world as they go too.

In Vodari, the godwar destroyed almost all written knowledge and dragged the world into a dark age for centuries. This gave me my first shortcut, as I could gloss over the details of Vodari’s history, since characters in Vodari would know little ancient history. For my Player’s Guide, I created a very lightly detailed timeline stretching back 30,000 years before the godwar and I provided an outline of the major events and development in the world over the 1000 years after the godwar. By the time my players arrive on the scene, the world is populated by barbarian tribes to the north, island kingdoms to the south and small pockets of independent farmers, traders, smugglers and pirates.

You can also add history as you go. Being a little light on history allowed me to work with my players on a few details to make the world feel both more lived in and their own.

You do need to make sure you have enough history that you understand how all the major players got to be where they are. I like to think of history as the backstory for all the groups in my world. With an outline you can make sure all the backstories of the major groups fit together – creating a rough outline of world history.

Here is the brief outline I provided my players to help them with character creation. I also wrote a couple of paragraphs for each race and where they fit in Vodari (with some help from my players in a couple of cases), but I’ll cover that in Part 4. I have my own notes that are more detailed, but this really gave me what I needed to run the world my players would be living in. Looking at this outline after ten sessions, I already have lots of details to add to the last entry.