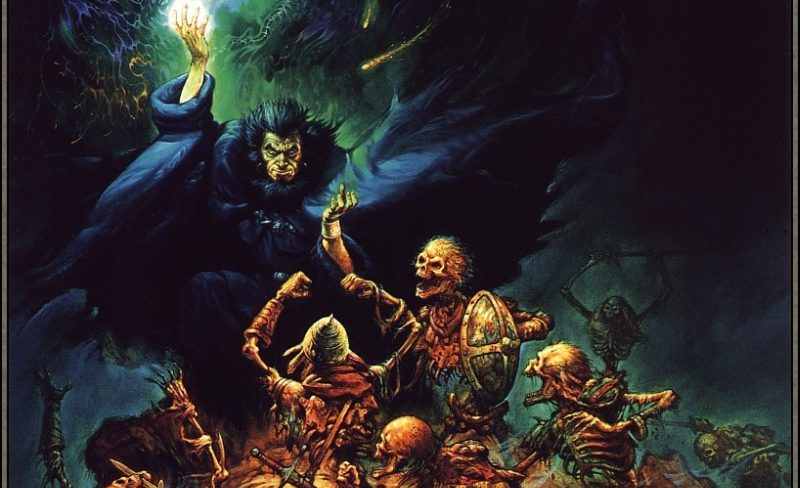 So here’s the scenario:  your group has decided to delve into the dark side and try out a campaign where they will be playing “evil” characters. Maybe you’ve never done this before, or maybe you’ve tried in the past with less than stellar results, or maybe it was okay but you really wish you could get some advice for the next time. Well I happen to be a big advocate for letting players run with an “evil” campaign from time-to-time and here are a few pointers I’ve learned along the way:

Evil Does Not Mean Psychopath

Quite often, one of the very first things you will get out of some players with an evil character is the line, “I can do what I want because I’m evil!” (Loud Buzzer) Wrong! In fact, I’ve found that one of the beautiful things about playing an evil character is walking that fine line between “I’m not going to do anything because I’m cold blooded bastard” and “Hulk Smash!” Just because your character has a more negative view on the world doesn’t mean they intentionally go off the deep-end whenever they want, or even when they can.

For the most part, I find the best evil characters to be calculating, devious, back-stabbing, insightful, charismatic, willing to work with others, and even accomplish some good if it will benefit them in some manner. I also think it’s wise to stay away from such character traits as being impulsive, wild, manic, raging, uncaring, unfeeling, reckless, and lacking in any kind of self-preservation instinct. Now I’m not saying that all of these traits are completely off-limits but they should be used sparingly. For examples and inspiration, I look to characters like Tony Soprano (The Sopranos), Michael Corleone (The Godfather Trilogy), Walter White (Breaking Bad), Professor Moriarty (Sherlock Homes), Loki (The Marvel Universe), and Darth Vader (The Star Wars Universe).

Another big misconception that I find among players and DMs alike is the idea that evil characters need to be loners or don’t work well with others. On the contrary, I think the most successful villains in fiction have been those who not only work with others but also inspire them to do their bidding. This includes men and women who use their charisma, their cunning, sometimes their riches, and also their very will to convince others of their promise of a “better” future in exchange for loyalty and obedience. In fact, I’m amazed at how often you see DMs conjure villains with massive armies and countless minions but then see PCs create evil characters who want nothing to do with anyone. This is, in my opinion, a mistake.

When it comes time for the players to construct their characters, make sure they understand that even an evil campaign will still be co-operative. They will still be expected be part of the team and while back-stabbing among the PCs will most-likely happen in an evil adventure, it should be kept to a minimum. Perhaps the best way to go about this is to place the characters in a situation where they need each other to survive or profit and especially if they are all part of a single cohesive group. I’ve used organizations such as thieves’ guilds, secret societies, mercenary companies, cults, and even spy/covert operation organizations as good vehicles.

An interesting side-effect of most evil campaigns is the players’ sudden desire to stick it to their fellow PCs. Maybe this is for past transgressions that have been slowly building over months or even years, maybe it is to show-off how “evil” they really are, or maybe it’s the quick and easy way to assert themselves as the dominate evil character. Whatever the reason, DMs usually find their referee time greatly increased under these conditions.

There are two key things to keep in mind here: Firstly, this is almost always going to happen no matter what safe-guards you put in place so prepare yourself and your players. Perhaps a little warning at the very start of the campaign is in order or perhaps you should ask your players to run any backstabbing ideas that they have by you first. Also, don’t be afraid to dole out some punishment or random act of karma should one of your players go too far. Secondly, letting your players explore their darker side can be a good thing and even therapeutic. Maybe this is just the kind of release some of your players needed, maybe this is a constructive way for two players to resolve their differences, and maybe some players are just plain better at being devious and conniving. Why not let that out instead of bottling it up? Just do your best to not players doll out permanent or unrepairable damage to other players.

Have Your Endgame Ready

One of the biggest problems a DM can encounter when running an evil campaign is how to bring it all to an end. Do the “bad guys” actually win? What will they have to do in order to succeed? Are you sending a negative message if they lose or are fought to a draw? How do you make a bunch of evil characters winning the day seem heroic?

The way I see it, the best way to end one of these campaigns is to have your evil PCs doing battle against even more evil NPCs. That way, your players can claim that they are the lesser of two evils and thus their actions are more justified. However, I don’t see any problem with letting the dogs of war run wild and letting evil have its moment in the sun. I know that idea may leave a bad taste in the mouths of some DMs but I’m also sure that others won’t mind a bit of sinister indulgence once and a while. It may also be interesting to link the evil characters’ victory at the end of one campaign into the beginning of another goodly campaign where the players’ new characters have to rise up and do battle against their old ones. This is an epic two-part campaign idea that I have yet to attempt but have been toying around with for years.

Welcome To The Big Leagues, Kids

Lastly, there is one major thing I want to make absolutely clear when it comes to evil campaigns and characters: They are not for the inexperienced. Every single evil campaign I have run as a DM has been both challenging and occasionally stressful. In order to successfully execute this without having your players grind each other into the dirt or having the ending go horribly wrong, the DM has to be at the top of his or her game and always willing to step in before certain things go too far. It’s also important to know what kind of group you have to work with and trust that they aren’t going to take things too seriously or have some kind of meltdown. For instance, I would never run an evil adventure with a group I didn’t know or have just met. There are just way too many variables. And, if you are a new player or a new DM, don’t go rushing off into an evil campaign without learning the ropes of a good campaign or character first. If a good campaign is like walking a high-wire, then an evil campaign is like walking a high-wire blindfolded. Don’t try it without lots of practice.