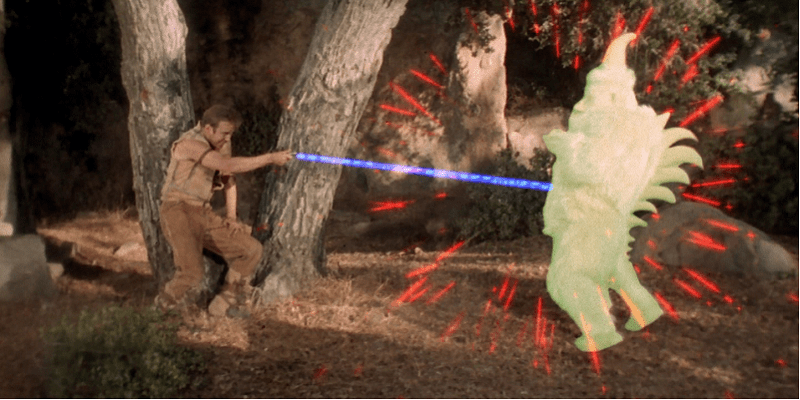 I like blending worlds in fantasy role-playing games using things from Wuxia, Star Frontiers, Wild West, and others, but doing that comes with certain difficulties. Especially, the difficulty with Science Fiction technology that the player’s characters do not understand, and how to best simulate that ignorance.

As an example, one of the players could find a ray gun. A ray gun with a trigger is pretty simple, and doesn’t put the players in a frame of mind of what the heck is that thing.  And that’s because most players have seen Star Wars, and Star Trek. So to get around that, some people will use intelligence check dice rolls to determine understanding, or flow charts with random results to determine how the PCs will use the “future” item.  Seems very clean and easy, but still doesn’t work for me. I want something more than just dice rolls and flow chart decision tables.  I want the players to feel like they don’t know how to operate this thing. “What the heck is this thing, and why is it starting to sound like a screeching Owlbear after I pressed the trigger?”  [Because it’s about to BLOW UP! You pressed the wrong button and set off its security measures 😉]

So going back to the idea of that Ray Gun, remember Captain Kirk always saying, set Phasers to stun? Well, that means there some settings on the device.  The Star Trek phaser beam could stun, heat, kill, or disintegrate living creatures. But how exactly were they set? (please, you don’t have to answer that) 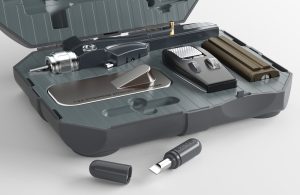 So to create a puzzle, I started by placing two buttons on the back of the Ray Gun, and some indicator lights on the side. I put three lights on the one I used in my game. You then have a puzzle that the players have to figure out.  They can do that “figuring out” by either pressing a specific sequence of the buttons, or holding a button then releasing it, or pressing buttons together. There are a lot of possibilities. And the indicator lights on the side can give them some feedback on the players choices. Either by one of them flashing, pulsing, going solid, or all of them changing state in different sequences.

If you are using my example of two buttons, then think of the left and right buttons as binary numbers and write down the possible settings that you want the Ray Gun to have. 01, 10, 11, 01 then 10, 10 then 01, 01 hold 6 seconds-release-10 hold 6 seconds-release, etc. You could look at Morse code it uses a type of binary system to create an alphabet and all the numbers.

An auto-destruct countdown with corresponding warning beeps after pressing one of the two buttons without a proper followup makes it a rush to stop the countdown. Also, every time they punch in a sequence, they would have to pull the trigger to test the ray gun.  And that just drains the battery, which may not be renewable, or just require a rest to recharge.

I don’t want to write down too much of exactly what I did with my in-game puzzles, because I am sure my players would love to see a users manual on the Ray Gun that they found last week.  Especially after two misfires that almost shot one of their party members. Haha… But using Sci-Fi technology puzzles has been very interesting in game, and gets the frustration, amazement, and awe I was looking to get.  And the complexity of any device they find can be increased by adding buttons, switches, dial wheels or toggles.

Have Fun, and play some games!