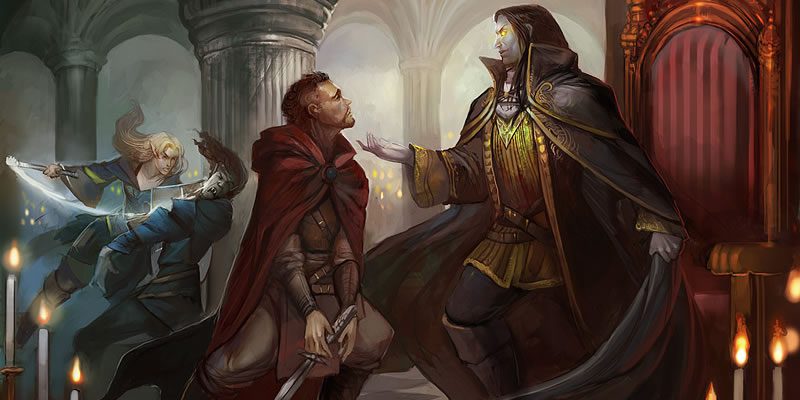 If you are thinking of adding a Recurring Villain as part of your campaign, then here are some guidelines that will help you in your game planning.

Not all the world revolves around the Villain, and his shenanigans may not be the focus of some of the adventures of the player’s characters.  But eventually the Players will start to see some patterns in some of the evil plots that have been taken place in the campaign. Either that the bad guy they defeated wore the same necklace, or had a strange symbol sewn into a cloak. Or the same strange method of torture was done to the innocents. There should be a pattern that is noticeable, or after the third time seeing it, the game masters draws the players attention toward it.  “This signet ring your found looks familiar to you.”

Just out of Reach

Having the Villain always in the spotlight is a bad idea, instead use his foot soldiers and minions doing all the dirty work.  Sergeants and Bosses should be doing a lot of planning for their Big Boss, and are probably at the forefront against the characters.  The players after defeating the Evil Boss in the adventure find out there is someone Higher up pulling the strings, or financing the operation. Putting the Villain within striking distance may cause the player’s to make a suicidal move to try and take him out. There is an organization and chain of command that is being followed to carry out the Organizations plans, and the players should just be seeing the minion and not the overlord.

Flesh Out the Villain

Fleshing out the Villain completely isn’t necessary at first as he will mainly be in the background of the campaign. The players should be learning about their own characters through interactions with local adventures. But once the players start tying the evil schemes together, it’s time to introduce some of the Villain’s back story, maybe friends, enemies, or his past could be part of the Villain’s identity. Placing the Villain at the head of an untouchable Organization will help establish his power.  His many evil schemes shouldn’t be traceable to his Organization or himself. His evil schemes could be done through a dark order of a church, or a government he has corrupted. A corrupt organization makes it so that the good guys and bad guys can’t be discerned.

The player’s success against the evil plots should start to get the attention of the Villain, and he may send out assassins, or even tax collectors.  They are starting to lose him power, money or territory.

Or maybe he already knows them, and they have been working for him all along and taking out his competition within the Organization. But once the player’s are aware of the identity of the Big Boss, then they come to realize the depth of his power.

He is Evil after all

Create scenarios where the Villain is doing bad stuff, but it should always have a reason. The player’s should also care that it is being done.

Burning down a village and chasing away the villagers because the land is needed is terrible, but doesn’t create the same effect if the village was somewhere they had just been and they return to find the innkeeper’s sweet family hanged as an example to stay away. Or he has the same family turned into zombies that attack the players.

Taking some ideas from the Nazis could help in creating the idea that the Villain is evil. The player characters could find out about people being worked to death in concentration camps, horrible experiments on people, etc. Creating the recurring can be difficult, and if the players defeat him, there should always be someone to take his place.  The Organization usually survives and names a new leader.

Here are some websites that may help create more depth for your villain: