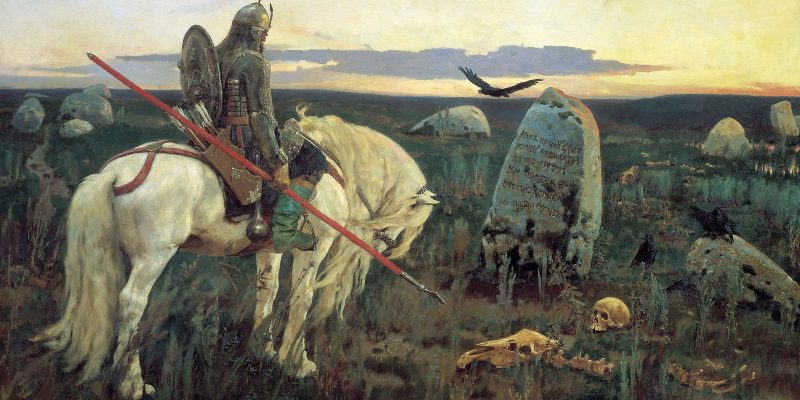 At the time I started this post, the Paladin class was tied for the top spot in the Future History of the Classes post. Since then, Warlock edged ahead, but since I didn’t set an end date to the polling, it is anybody’s ballgame… until they turn off the internet for good. Anyway, I’m writing about the Paladin. Much like when I discussed the Ranger over in my personal blog, Harbinger of Doom, there’s a common question that comes up when discussing the Paladin: does this class justify its existence, or would it be better for the class to be the result of multi-classing? To give this question due consideration, I’ll begin at the beginning.

The Paladin class – well, Fighter sub-class – first appears in Supplement I: Greyhawk. It is a total of four paragraphs. In a truly impressive display of burying the lead, it’s listed in the description of what the Charisma ability score does, and the text as much as admits that the Charisma score does nothing other than allow Fighters to be Paladins instead.

This is where we see the ability score pre-requisite of 17 Charisma for Paladins for the first time, and that does some odd things. If you roll ability scores in order, you have about as much chance of being able to play a paladin as you do of winning the Powerball. If you allow players to arrange ability scores but not trade points between them, it’s going to create fighters with middling Strength scores, because they’re spending one of their best rolls (if they even have one 17 or 18) on Charisma. Since Supplement I: Greyhawk also introduces rules for Fighting Men to gain actual benefit from a high Strength score (and, for reasons no one will ever truly comprehend, having exceptional strength allows you to roll for percentile Exceptional Strength, because why shouldn’t the rich get an order of magnitude richer?), so it kind of feels like a good reason to skip this whole Paladin thing and stick with a plain old Fighter.

You might think to yourself, “How much damage could Gygax really do to the game with four little paragraphs?” That second sentence of the first paragraph, though… it laid the groundwork for what are certainly the most acrimonious arguments at the table and in online forums in all of D&D’s history.

“If such fighters elect to [do so,] they can them become paladins, always doing lawful deeds, for any chaotic act will immediately revoke the status of paladin, and it can never be regained.”

It was 1975, Rhinestone Cowboy was topping the charts, and no one had ever done this before, but this is the number-one reason that arguments about alignment matter in gameplay. (The number two reason is the incredibly miserable rules about losing experience points if you violate your alignment.) The guidelines within this text for what “any chaotic act” might mean are murky at best. Gygax has some idea of Chaotic not as favoring freedom and individual agency over society and order, but as overweening greed, PvP at the table, and simply random actions: “While there is no rule to apply to groups of chaotic players operating in concert, referees are urged to formulate some rules against continuing co-operation as fits their particular situation, but consideration for concerted actions against chaotic players by lawful ones should be given.” First of all, I have no idea what that even means. It seems to me, though, that an alignment-violating act for a Paladin in Supplement I was something far more outré and indisputable than in later books. The general lack of guidance is a real problem, though, because there is so seldom a meeting of the minds between Paladin players and DMs as to where the moral lines are drawn, and with the rules phrased rigidly, squabbles are inevitable.

Paladins, and any concept of a proscriptive code of behavior, contrast strangely with my impression of the general mode of play in the mid-70’s. Reading Gygax’s accounts of early dungeon-crawling and looking at the kinds of rules he designed, it seems pretty clear that unrestrained murder-hoboism was the style. Consideration of actions on moral grounds? Quite out of place, an artifact from a decade or two later in gaming. (Disclaimer: I started playing tabletop games in ’93. I’m extrapolating heavily, and it’s cool if I’m wrong.)

Gygax wasn’t done causing fights, as in the last sentence of the fourth paragraph: “They [paladins] will associate only with lawful characters.” This ensures constant bickering between paladins and any other party members that don’t agree to whatever code of behavior the paladin decides upon. Every part of the write-up builds up the class’s legendary self-righteousness complex, but this is the line that makes them the most obnoxious to other players.

A certain amount of this was inevitable: a cursory consideration of modern society suggests that there are substantial differences of opinion vis-à-vis codes of moral behavior, and so on. The problem comes back to the first quote, in which paladins are stripped of paladinhood for even one infraction. Players and DMs with a healthy social contract recognize the need for negotiation and discussion before, during, and after any possible violation of the paladin’s code, but the text of OD&D doesn’t teach that – it teaches the DM to be a tin-pot dictator.

Now, everyone can see that Paladins are based on ideas of Christian knighthood, and especially the twelve peers of Charlemagne’s court. It’s possible and advisable to re-imagine paladinhood into other contexts, but the baseline belongs firmly to medieval Christianity. I also think it might be an understatement to say that gamers, taken as a whole, have a fraught relationship with modern Christianity; speaking as an Episcopalian, I have plenty of issues with the broader dialogue of modern Christianity. This has, I believe, motivated a lot of people’s outlook on paladins, to make them zealously repressive toward party members and NPCs. The issues of game rules in the Paladin class are something one can solve. Conflict tied to external views of faith, zeal, and what it means to be Good may verge on irreconcilability, though there is virtue in having a sincere conversation on the matter.

In summary, the Paladin write-up of OD&D could use a lot more clarification as to the moral standing expected from the player, and a lot more guidance to the DM on how to not be a jerk. Later editions of D&D refine this situation substantially; given how thoroughly these kinds of conflicts shaped the gaming culture, I might wish they had come to better answers faster.

Okay, but the Paladin has some class features other than its code of behavior, right? Indeed it does! These are features we’re going to recognize all the way down to 5e, with only minor absences even for 4e.

One interesting absence from this list is any form of true spellcasting. By comparison, the Ranger class in OD&D receives quite a variety of spellcasting options, and every later iteration of the Paladin class casts spells in some manner. The presence of spellcasting in those later iterations is a big part of the argument in favor of paladins being Fighter/Cleric multi-class builds rather than a freestanding class or subclass.

One might have reasonably expected that a mere four-paragraph write-up would take less than 1,500 words to discuss. I scoff in the face of brevity. Going back to the central question of the Paladin, does the OD&D version justify its existence? Without a multi-classing system, in one sense every OD&D class justifies its existence – there’s no way to mechanically represent a new concept other than building a new class from scratch. In another sense, the Paladin is a direct addition to the Fighter’s abilities, so it isn’t a class at all – it’s a template that you might be able to bolt onto your pre-existing Fighter.

Steer clear of this concept and just play a goodly, charismatic fighter, though, unless you have a strong foundation of trust with the DM and you’re pretty sure that everyone (you, the DM, and the other players) are on the same page for the expected code of behavior.  If you can manage that, and sticking to that moral code sounds like your deal, then go for it – having to deal with moral crises can be a lot of fun, as long as it’s not just stopping the rest of the party from enjoying the game.