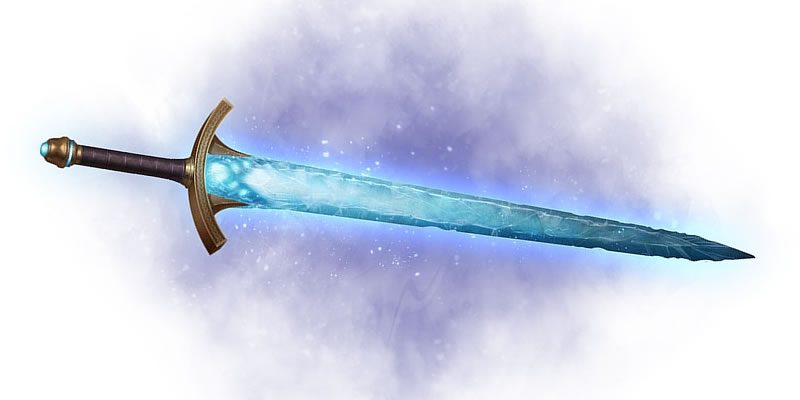 Even the early days of roleplaying were seeded with aquatic magic items, from the helmet of underwater action to the Apparatus of Kwalish. Almost all of these items were designed for surface races to spend time beneath the waves. In “Waves of Enchantment” I’ll be presenting magic items from a more amphibious point of view. This week, magical weapons inspired by a conversation with aquatic DM extraordinaire and resident merman, Daniel L. Craig. Huge thanks, Daniel.

Weapon: shortsword, rare (requires attunement)
Kraken’s beaks resemble thick-bladed shortswords and are rarely found without their accompanying scabbard. Both the pommel of the sword and the scabbard are bound in leather made from the skin of a rare species of deep water shark that lives below 1000 meters. The shark’s placoid scales are smooth when stroked in one direction, and rough when stroked in the other. Once attuned, the textural properties of the leather increase the grip significantly, forcing all attempts at disarming the weapon to be made with disadvantage.

When found within its scabbard, the sword is often confused for a standard, though beautifully constructed, shortsword. The hilt’s leather is often intricately carved with delicate images of sea life and set with a gleaming, polished abalone shell pommel. Once drawn, the unusual properties of the weapon become apparent.

The blade and tang of the kraken’s beak are a translucent white. Though as flexible as steal, the magic of the blade makes it significantly stronger and the edge preternaturally sharp. Even on the surface, the scabbard keeps the kraken’s beak bathed in a light sheen of salt water. Fingers run along the flat of the blade reveal it to be unusually smooth, almost slick, with a soft, organic quality. In fact, the blade is made from a single piece of giant squid mantle referred to by anatomists as the gladius.

The standard kraken’s beak is a magical shortsword. As with all shortswords, the weapon suffers no disadvantage to attack rolls underwater. In addition, the bearer increases their swim speed by 10 feet as long as the weapon is on their body. The sword grants the bearer advantage on Athletics and Acrobatics checks made while submerged, including jump checks into or out of water.

The weapon’s organic nature makes it impervious to damage from cold, water, and pressure, and it is immune to rusting, including from the attacks of creatures such as a rust monster.

Very rare versions of the kraken’s beak may be found with a range of magical qualities dependent on the species that created it, including +1 or +2 enchantments and the bane quality. Sahuagin commanders may be found with fey bane or cetacean bane versions, while sea elves or merfolk may enchant the weapons with piscinoid bane or shark bane qualities.

The bane quality grants weapons +2d6 damage against its chosen target on a successful hit. This damage is of the same type as the weapon.

Fey bane weapons deal their extra damage to any fey-blooded creatures, including elves and half-elves. Shark bane weapons affect all manor of cartilaginous beasts including sharks, skates, rays, and megalodons, as well as wererays, weresharks, and sahuagin.  Piscinoid bane weapons affect all fish-like humanoids, such as sahuagin, kuo-toa, and locathah. If merfolk in your campaign have the fish-like bodies commonly associated with Earth mythology, these weapons also deal their extra damage to them. However, if merfolk in your world have more marine mammal qualities than fish (which is my personal preference), then they are safe from piscinoid bane weapons (see cetacean bane weapons below).

Perhaps due to the fact that giant and colossal squid are the natural prey of certain marine mammal species, cetacean bane kraken’s beaks always possess a +2 bonus to attack and damage rolls. Despite its name, cetacean bane weapons deal their additional damage to all marine mammals (including transitional marine mammals such as polar bears, and merfolk if that race in your world has more mammalian qualities than fish).

Weapon: shortsword, legendary (requires attunement)
The deep lord’s blessing is a +3 fey and cetacean bane kraken’s beak found most often in the hands of powerful sahuagin clerics of Sekolah and their counterparts, the Jaws of Sekolah (evil aquatic or vengeance paladins with appropriately twisted tenets), and is the only item allowed to be possessed by non-kraken clerics of Panzuriel.

These weapons are created through a torturous ritual that ends with the gladius being pulled from the body of a still-living giant squid. As the mantle is removed, the tortured creature’s soul is pulled out with it and trapped within the weapon.

These swords possess 5 charges that can be used to cast the following spells. To cast these spells, the sword must be in the possession of the attuned, but does not need to be drawn. At midnight, the sword regains 1d4+1 charges.

To destroy a deep lord’s blessing, the weapon must first be attuned (an immensely unpleasant experience for good creatures). Once attuned the bearer must cast dispel good and evil and expend the spell to use the break enchantment effect, followed immediately by the spell, raise dead. The spirit of the giant squid will only return to life if the body is present and it has been less than 10 days since it was killed, otherwise the creature’s spirit moves on to the afterlife. After either result, both the weapon and its scabbard deteriorates leaving nothing behind.