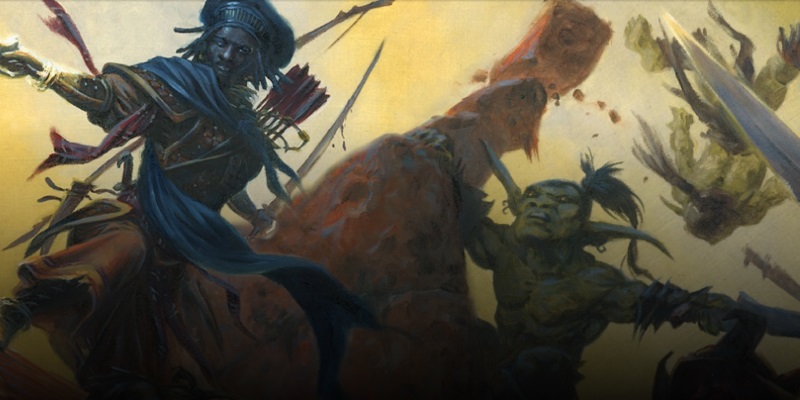 This week in Unearthed Arcana, Affleck & Damon present four new fighter archetypes: the Arcane Archer, the Knight, the Samurai, and the Sharpshooter. To talk about them, though, let’s first step back and talk about how the Player’s Handbook fighter archetypes are imagined on a different axis than any other set of subclasses. This has informed later subclass designs, and it makes today’s UA a challenging contrast.

I had been hoping to save this conversation for an eventual “History of the Fighter Class” series, but instead, I’m doing it today. Now, I can’t honestly say that each class’s archetypes have an identical level of complexity – compare the barbarian’s two and the monk’s three – but only in the fighter class is there such a yawning gulf of difference. Nor do other classes intentionally strip their archetypes of setting context, as the Champion and Battle Master have been. There are features in each that aren’t explicitly about weapon-induced murder, but even those don’t do a lot to communicate theme. It’s possible to draw the impression that the Champion is the more resilient brute, trained in the School of Hard Knocks, while the Battle Master is the refined, formally-trained warrior poet (or other form of artistic expression), but even that is reaching.

The thing is, the fighter is the most universal archetype in all of fiction, to say nothing of fantasy fiction. The original fighting-man class is even more devoid of features – the perfect tabula rasa for any hero who accomplishes deeds through physical prowess rather than magic (because there was no thief class at the time). Much as D&D has long defined races by their difference from humans, other classes seem defined by their separation from the fighting-man. Eventually, I’ll map that statement forward in detail, but 3.x has to be the high-water mark of “fighter as tabula rasa” – just look at all those bonus feats, and the wide-open “yes you can” of proficiency in all simple and martial weapons, armor, and shields.

It’s tough to pull together a class from Beowulf, Buliwyf, Conan (what class is Conan? Barbarian, ranger, rogue, fighter… yes to all), d’Artagnan, John McClane, Joan of Arc, William the Marshal, William Wallace, William Tell, William the Conqueror, Bill the Butcher, Lancelot, Miyamoto Musashi, Captain America, Lyudmila Pavlichenko… and so on. D&D has tried breaking these out into more classes, so the design can drill down into greater detail, which is how you get the paladin, ranger, barbarian, monk, and rogue.

Those classes in turn take on lives and themes of their own, as you now know if you’re thinking about arguing with my list of famous fighters and which class they should be. What do you do if you want to play a knight but don’t want the thematic weight of an Oath or the gameplay of smites, channeling, and spellcasting? You probably choose fighter, and if you’re playing 5e, maybe you start looking for a cleaner fit for your concept than Champion, Battle Master, or Eldritch Knight have to offer. After all, you did this to avoid spellcasting, so EK is out, and Champion and Battle Master were deliberately stripped of thematic weight.

And that, little UA article, is how you were born.

As far as I know, the lineage of the Arcane Archer is, approximately:

The flavor text for the Arcane Archer calls out its old elves-only requirement, but there’s no mechanics-side acknowledgement of it. That’s marginally better than a ton of people trying to figure out how to be the exception, sort of like all the people who want to play drow without Sunlight Sensitivity. Anyway.

You’ll notice that there was one arcane shot for each of the eight Traditions. That’s a neat approach, though I suspect that many Arcane Archers would be interested in a few more evocation options. Overall, this is probably my favorite of the four archetypes presented here. I’m surprised the number of uses per short rest never scales up, since the comparison between Create Magic Arrow uses and Combat Superiority dice more or less writes itself (and you can buy more CS dice with feats). This archetype offers mechanics that you can indirectly spoof with other classes, possibly multiclassing along the way, but this does it cleanly and clearly. I’d be curious to see how it stacked up in long-term use. If you miss the 4e seeker, you need a good way to play Oliver Queen, or you want to play a more different concept of elven “knight,” this is the place to be.

This archetype is one that they’ve covered before, with the Cavalier in “Kits of Old.” The first version was built on Combat Superiority dice, with a blend of maneuvers available to the Battle Master and new maneuvers. There’s a lot of room to debate whether building a bunch of archetypes on the Battle Master’s schtick is a Good Thing or a Bad. Ultimately I retreat to the position that no single design decision is good or bad – it just depends on how it connects to everything else. In context, then, I would like to see a freestanding class that uses Combat Superiority dice, and gains most of its maneuvers based on its subclass. I’d like to propose a couple of names for this class, such as Otherfighter. No? How about the Alt-Fight? (But then we’d have to call them Dice Supremacy.)

…moving on, as I lose all of my non-American readers completely…

Overall, my take on the knight is in agreement with my colleague Marsupialmancer: if you’re in a campaign without feats, this is how you play a tank. A campaign with feats doesn’t really need this content, and they should just play a Champion or Battle Master with Sentinel and call it a day. These guys look like they would slow down play immensely. Their stickiness is near absolute, and once this style of defender is in the game, it changes table expectations and monster design. Ultimately, I think this is the kind of subclass you can’t introduce midway through an edition unless you’re ready to deal with its bad effects on player psychology.

I don’t think I’ve ever seen a Samurai class, subclass, or prestige class in D&D that I liked, so this one is starting with a few strikes against it for me. There’s a sidebar calling out that they’re talking about the “cinematic, heroic” elements of samurai and knights in this document, but… making samurai their own unique thing in a world full of fighters just bugs me. What’s worse, the artistic and contemplative elements of the Battle Master – especially Know Your Enemy – are all about modeling the cinematic Samurai, so this is trying to carve out space that is already well-trodden ground, just as the Knight did.

Now that I have my own copy of the 1e Oriental Adventures (near mint condition! Many thanks to the friend who gave it to me), there will probably be a brief History of the Samurai Class digression as part of the History of the Fighter Class. Apologies in advance to people writing Japanese History papers who come across that series in their Google searches.

Let it not be said that I won’t give it a close look and a fair shake, though.

This Samurai subclass doesn’t piss me off, but most of its coolness doesn’t feel specifically Samurai-like to me. I’m surprised there’s no specific support for iaijutu dueling, a discouragement of dual-wielding (I know the history barely supports it at all – I also know that fantasy samurai always fight with both katana and wakizashi), and only minor support for obligation to a feudal lord. I also suspect that it’s underpowered when compared to the Arcane Archer or the Knight, though the extra survivability won’t go to waste.

As people have been noting all over the internet (Dan Dillon, this one’s for you!), it’s probably not good for a subclass to share a name with a popular feat. It’s probably worse when so much of the subclass’s function comes from existing feats. I’ve been talking about how other archetypes in this document are struggling to justify their existence alongside the current Player’s Handbook content? Yeah, this one has it the worst.

This archetype is pretty good on the cinematic-action side, and harder to judge on the balance side. It probably won’t frustrate the rest of the table, unless the damage boost from Steady Aim makes the Sharpshooter just outshine everyone else at the table. A lot of the feats you’d expect to want as an archer have already been looted for features, or will be in a later archetype feature, so you may have a lot more spare ASIs than other fighters. Anything that cuts down on people buying Crossbow Expert just for its second feature is a good thing in my book, though.

The Arcane Archer remains the highlight of this playtest document, to my eyes. It does the most memorable and distinctive things, supporting a concept that nothing else quite nails up to this point in 5e. The rest of the archetypes I could do without – the Knight has a complicated effect on the metagame that I think is mostly bad, the Samurai is thin on flavor notes and probably underpowered, and the Sharpshooter is fine but forgettable.