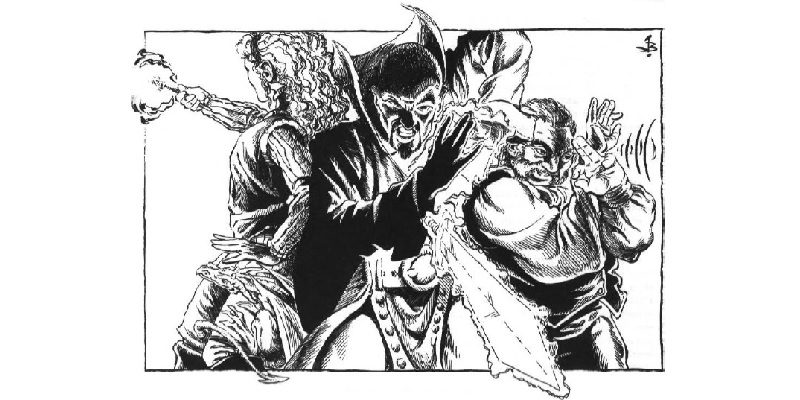 This week I took a look at Bigby’s spells. Last week I put together two spell conversions: Melf’s Unicorn Arrow and Melf’s Slumber of Arrows, and there were some critiques on the power and level of those spells. So I will be making some tweaks, so check out those updates here:  Spells for D&D 5th Edition [Part 1]

Right now here is the long list of Bigby spells that were brought over for D&D 5th edition:

Yeah, just kidding, there is only one spell, but it’s a big spell. BIG! Bigby’s Hand is composed of many of the older spells.  All of those spells with an asterisk are compressed into Bigby’s hand, and those different aspects can be switched on as bonus actions after casting the spell.  Here are all the spells that are typically associated with Bigby:

Bigby was busy. I started going to go through the long list of Bigby spells with a plan on converting them, but that didn’t seem practical. As I started reading them, many of the spells are just reworded to function in a specific weird way or the same way as another spell. All of them can simply be handled by Bigby’s Hand spell and casting the spell using a higher level spell slot.

Bigby’s Crushing Hand spell was left off as a specific option in the details of Bigby’s Hand Spell, but it is included in the “At Higher Levels” section. What I think is still missing, are the statistical increases at higher levels for the hand. So what I want to do is increase Strength, increase AC, and increase hit points for using a higher spell slot level.

I’ve added this wording: The power of the hand increases by Strength +1, Armor Class +1, and Max Hit Point +20 for each slot level above 5th.

And here is what those numbers looks like in a fancy chart:

Beyond that, I am pretty happy with the spell, and will be sure to pick it up when my wizard can cast 5th level spells.  So not to leave the article too short, I have been given one of Bigby’s least known spells that has found it’s way into my grubby paws. I think there are times when it may seem appropriate to use this spell.  So for the lower level spell casters, here is a spell for you guys:

You create a small hand of shimmering green force in an unoccupied space that you can see within range. The hand takes the form of a clenched fist with the back of the hand directed toward a creature, object, or specified direction.  The middle digit of the fist slowly extends in front of the target. The hand will move and stay in front of a creature’s face no matter where it moves for the duration of the spell. The middle digit of the hand can be retracted and then extended again as a bonus action after casting.

The hand is an object with AC 10 and has 1 Hit Point. If the hand takes damage and is reduced to 0 hit points, it remains at 1 hit point on a saving throw roll of 10 or greater.

At High Levels. When you cast this spell using a spell slot of 2nd level or higher, another hand can be created for each slot level above 1st, but must be within 30 feet of the first hand.