In the Eye of the Beholder: Skills 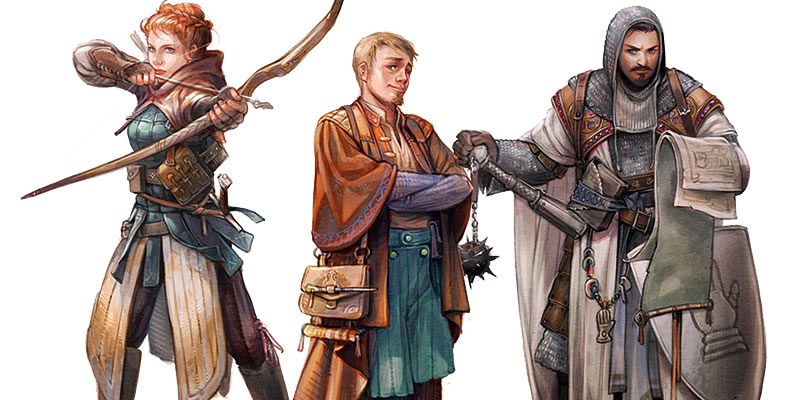 Skills are the things that allow adventurers to succeed where others might fail. The ordinary person might not be able to fling a fireball or swing a sword as well as an adventurer, but the rigors of the road and the depths of the dungeon require crafty, skilled people to navigate. So it was with great surprise that I noticed how abused skills were in the 5e player’s handbook. They have fallen from having a whole chapter about them in 3.5 to having a small section in the ability checks. Now, not every innovation is bad. Skill points are a hassle for players to handle, and it makes much more sense to be proficient in something, rather than to worry about cross-class skills and the level cap for skill points.

So what is bad about having a small skill list available for players? As an example what if my player wanted to roll a skill check to determine what his character might know from his studies about a Balor? Now, a DM could rule this to be a intelligence (arcana) check, or perhaps an intelligence (history) check. Perhaps it would be an unmodified intelligence check. None of these options feel great. There should be skills to cover, if not every eventuality, at least the common ones that an adventurer will run across. So, this week we will be putting skills in the Eye of the Beholder, and trying to figure out how to make them more useful as a tool for allowing characters to roleplay.

The first thing we need to look at is how our players get skill proficiencies, and when we allow players to use skills. Characters get skills from both their class and their background, and they can also get some from feats (if this optional rule is allowed). Players do not usually get skills as they level, a difference from the previous editions. So, if we want our characters to improve and gain new skills, we must either allow them to undergo training for the price of gold (an option for a roleplay heavy campaign) or else allow them to gain skills as they level up (for the combat/ dungeon crawler campaign) I would recommend allowing players to gain new skill proficiencies fairly slowly, as you risk trivializing feats by making the skills that people gain with them unimportant. But even once players have access to more skills, there are still two remaining problems with the current skill set. The first problem is that there are still very few skills in the game, and the second is that skills often don’t seem to matter. After all, the skill difficulty classes given for most scenarios are fairly low, in accordance with the low scaling in the new edition. This emphasizes dice rolls, which is good in some contexts, but often bad in the case of skills. After all, if the difficulty to know a rare fact about some obscure lore is 18, then the barbarian with a 10 int still has a fair shot at knowing the piece of lore – even without having the appropriate skill! I would recommend fixing this by allowing only characters who are proficient in the appropriate skill to make the roll. Often, it simply doesn’t make sense for characters who have not undergone intense studying or training to be able to perform certain skill checks.

This solution still leaves us with a simple problem- there aren’t enough skills in the game. I personally feel that having a diverse skill set exemplifies a character, and that simply calling for ability checks makes the game feel less diverse and makes character choices less important. That being said, I would not go to the lengths that 3.5 went, as it had a number of skills that wasn’t helpful, it was actually burdensome. Here is a list of skills that I would add to a 5e campaign, inspired by 3.5e and with the aim of actually improving the game, rather than simply making it clumbersome. You may use any or all of these, as you see fit. I would recommend picking and choosing those that apply to the theme of your campaign.

A very particular set of skills

Decipher Script (Intelligence) – This check is used to translate dead languages into modern counterparts and to break apart ciphers. This check has no truly analogous check in 5e, and I find my players often seeking to preform this task. This might be appropriate with forgery for political campaigns, or could be used if your players are in ancient ruins, trying to understand clues of long lost civilizations. Wizards, warlocks, sorcerers, sages and even bards might have the requisite knowledge for this skill.

Planar Knowledge (Intelligence) – This type of check is used specifically for knowledge about otherworldly creatures and events. Some Dungeon Masters would put this skill under Arcana, but I like to use arcana to understand specifically magical phenomena, as opposed to understanding fundamental forces of the outer planes. For example, a golem or magical runes would be in the purview of arcana, while knowing how to survive on the elemental plane of fire would by planar knowledge. Only use this skill if your party is going to be venturing to other planes or else encountering lots of outsiders. Wizards, warlocks and sorcerers, as well as players with the sage background, are the ones most likely to use this skill.

Profession (Wisdom) – This is a skill used for players who want to emulate some particular skill at farming, sailing, or some other simple job they did before being an adventurer. This skill is most appropriate for those who are trying to fill out a background story for their character. Druids who came from rural backgrounds as farmers might be interested in this skill, to emphasize their connection with the seasons and the land.

Craft (Intelligence) – If you want to introduce a crafting system for your D&D game, that is a whole ‘nother ballgame, which I will be covering in a future article. If you want to make one though, starting here is the best place. A fighter, like an eldritch knight, who wanted to craft their own (magical) gear, might really like a skill such as this one.

Forgery (Charisma) – This check does about what it says (although, you may wish to make it an intelligence check, that is an individual call for a dungeon master). Allowing your players to forge letters of marque, or bills of sale, or even papers allowing them to pass through the Nine Hells, is an invaluable skill. I would highly recommend making this available to your players for political campaigns. This skill is useful for all classes, but rogues, bards, warlocks and other wily types might find this especially helpful.

Thievery (Dexterity) – When it comes to lock or traps, rogues with their tools and expertise will reign supreme. However, if your party lacks a rogue and you want to allow players to be proficient with a skill designed to undo locks and foil traps, this is the one for you. I would recommend allowing classes such as bards or rogues or backgrounds like urchin to dip into this skill. (Rogues being an obvious inclusion)

If you wanted to make a truly skill based campaign, you could shatter skills like athletics into swimming and climbing, or break apart thievery into two separate skills. I would recommend against that however, because there are so few skill slots as it, and making your players choose between those skills seems pointless. I hope you enjoyed our brief tour of the skill system and I implore you to continue reading in The Eye of the Beholder as we explore these topics, monsters and our own ability to improve the game, both as players and dungeon masters.

Rodney Thompson is Leaving Wizards of the ...