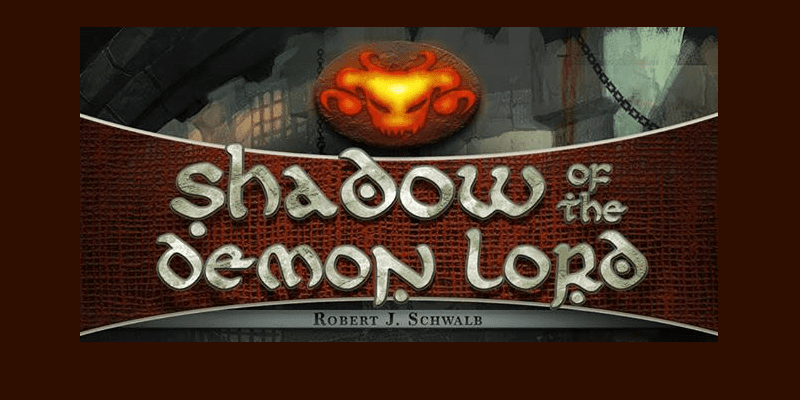 The long awaited Shadow of the Demon Lord RPG is now available for the Kickstarter supporters through the DriveThruRPG website. I am very glad to have it in my digitized hands, so I can start perusing over it. Here are my initial impressions with an intro about the game first;

Shadow of the Demon Lord

Shadow of the Demon Lord is a horror fantasy tabletop roleplaying game that gives you and your friends everything you need to experience the last days of a dying world. Using the rules in this book, you can create a new character in just a few minutes and be ready to immerse yourself in a setting overrun with deranged cultists, terrifying demons, and bizarre monsters conjured from nightmare. This rulebook also includes everything you need to create adventures for the game and offers extensive game mastery advice, rewards, and a bestiary packed with foes to fight or to flee. Shadow of the Demon Lord is your portal to a world of perilous, maddening adventure!

Reading through the PDF

The first thing that jumps out is the artwork. It is absolutely fantastic! The next is the intro by Frank Mentzer, and a great opening explanation by Rob of “why” the game was created:

I discovered, after my time on D&D came to a close, I wanted something to call my own, a tabletop roleplaying game freed from canon and born from my imagination, shaped by my tastes and interests, all to produce a tabletop experience that matches those I have witnessed at game stores, at conventions, and at my gaming table and the tables of my friends. To feed this hunger, I began design on what would become Shadow of the Demon Lord, subjected the design to rigorous testing, designed and redesigned, clarified, scrubbed, cleaned, and more to arrive at this product that you now see before you.

Do you want to hear about Player choices? You choose from one of a few core ancestries; Humans, Changelings, Clockworks, Dwarfs, Goblins & Orcs! There will be others introduced in future books.

After that, you generate Attribute scores with Strength, Agility, Intellect and Will with a range of 1 to 20. They all start at 10 and can be adjusted by decreasing one, then you can increase another. With those scores, you receive scores in Defense, Health, healing rate, Perception, Size, Speed, Power, Damage, Insanity, & Corruption. All determined by your character’s Ancestry and Attribute scores.

You then determine background, religion, age, build and appearance with random tables. They are very dark and can be very gruesome to some. Like this one for background: “You have a spouse and 1d6 -2 children (minimum 0).” Shudder! But seriously you could have this one: “You were enslaved by a hag and forced to perform unspeakable acts as she commanded you…” Don’t speak about them okay!!!

Then you have a character to start playing and you first start without a level. As the game progresses, your character will advance from level 1 up to level 10. Pick a path for Novice (Level 1), Expert (Level 3) & Master (Level 7).

Novice Paths include Magician, Priest, Rogue & Warrior. Expert Paths are Faith, Power, Trickery and War. With several specific Paths include in those 4 groupings. Each player can choose any Path without consideration of their Novice Path. At Level 7, a Player picks a Master Path or a second Expert Path. The Master Paths are divided into two paths; Magic & Skill with many many options to pick in those categories.

The game is d20-centric with checks and bonuses based on attributes/characteristics, and has a lot of flavor from Dungeons & Dragons in that respect. But quickly stops as you start to get deep into the rules. There are only two types of dice used though. Twenty sided and six sided, used for d20, d6 or d3 rolls. Nice and simple.

Combat is deadly. You have Health equal to your Strength Score + Ancestry bonuses. Get to 0 Health. You dead. Well, almost. There are rules for Fate that determine if you live or die.

For harder tasks, the game uses Boons & Banes that work with adding one or several d6’s to a d20 roll. Take the highest d6 & then add/subract the result from the d20 roll. The target number is fixed at 10, so it makes it easier on the GM. Really Quick and Easy.

I really like the Madness mechanic. It goes great with the genre of the game, and can help with role playing opportunities. It can also kill you as your heart stops beating!

Magic works fairly simple with a spell caster having a Magic Power level that determines castings available by spell ranks. If you’re familiar with D&D/Pathfinder, you’re not going to have trouble understanding the Magic system

A Land in Shadow

The world of Urth has drawn the attention of the Demon Lord. So it’s a world where the Void has escaped and is going to destroy the world. The world has black power, clockwork and steam technologies, but with a dark bleak world. This allows for adding the Demon Lord’s Shadow directly into the game, and there are mechanical rules for what happens when it is added. There are effects like Infestation, Famine & Drought, Restless Dead, just to name a few.

You run games and with Shadow of the Demon Lord, the campaign should all end after the players reach level 10 and completed the Final Campaign objective.

Players level up after each adventure objective completion, so after 11 games the characters in the campaign should have completed the big campaign objective. They will have played; 1 starting adventure, 2 novice games, 4 expert and 4 master adventures.

I have done a cursory read over the book since this morning, and I am really liking everything so far. Great monsters, great mechanics, great theme…

It all looks… well… Great! I have to say that Robert has done an excellent job with this game! Now if you weren’t part of the kickstarter, go get the PDF now.

If you have any questions, or see a misprint, please let me know. michael@tribality.com

The game is available for purchase right now; you can get a copy with this link at DriveThruRPG: http://bit.ly/1JA87uW

If you want to read more about the game, here is the Kickstarter link:

Here is an audio podcast of game play with Robert J. Schwalb at MTAC:

LARPing: an Intro for Tabletop Gamers