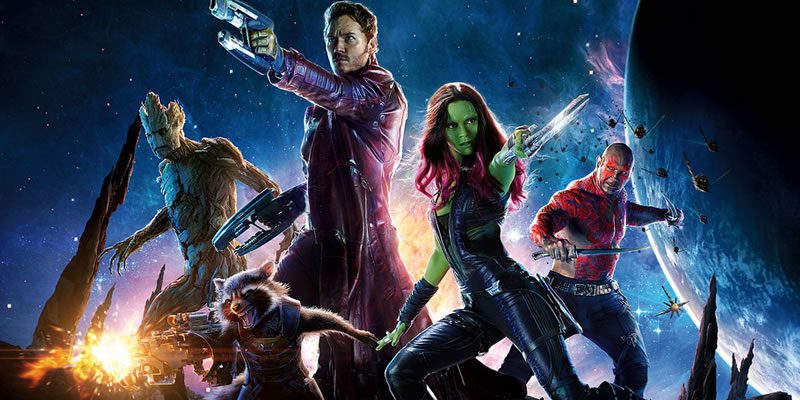 Guardians of the Galaxy grossed $774 million worldwide at the box office, a sequel is on the way in 2017 and they even have a cartoon series on Disney XD. While Guardians of the Galaxy takes place in a science fiction setting, this crew of rogues and misfits figuring out how to work together to save the galaxy, felt like a great RPG campaign unfolding. Trying to create super hero player characters for D&D has its flaws (but they’re still fun to build like these Avengers). Quill and his crew have few traditional “super” powers and are actually much closer to a bunch of mid level D&D characters running around creating trouble before saving the day. Don’t forget magic is just advanced technology in the Marvel cinematic universe, so bring on the magic in a sci-fi setting too.

This week on the Campaign Trail I thought I’d offer DMs some premade characters to use or for players to look at for ideas when creating their next PC.

The origin of cinematic Groot is a mystery, but in the comics he is a Flora Colossus from Planet X. Groot has the ability to regenerate and can stretch and grow for attack and defensive purposes. Groot is able to sprout, dramatically increasing mass but also severely inhibiting movement.

Groot is the toughest character of this bunch to build. Some of Groot’s abilities would be easier to create as a druid, but he fights like a raging Barbarian. Using Druidcraft, Thorn Whip and Entangle (from Magic Initiate feat), we can give Groot the ability to grow flowers, produce light using spores and throw around enemies with his stretched arms without dipping into Druid. As a DM, I would allow a player to stretch the limits of Druidcraft a little outside of combat too. To create Groot you also need to have Treant as a playable race and this homebrew works well (link to reddit). When hurt of even killed, Groot is able to regrow which is represented by the Durable feat and his racial Sunshine and Clean Water trait.

If you are just dying to play a Groot inspired character, be careful playing him with only a limited vocabulary, as it will eliminate nearly all interaction with other players. After playtesting a very similar character named Treeroot at levels 1-3, I found playing a Treant Barbarian to be super fun in combat, but better as an NPC with such limited vocabulary and interactive skills. 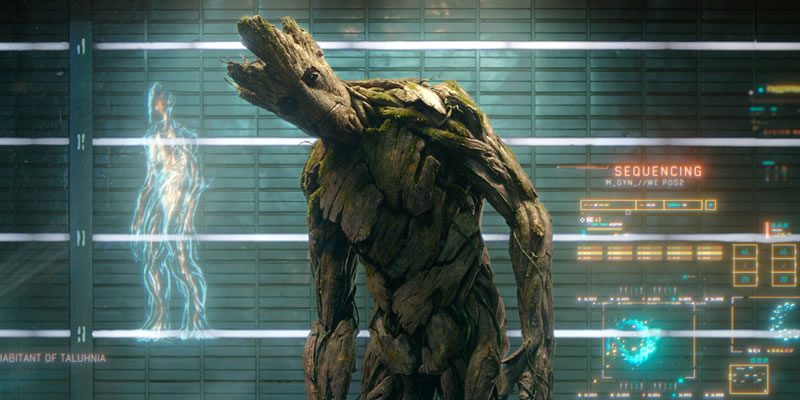 Rocket appears to be a genetically altered “racoon” with cybernetic implants within his body. He serves as the team’s pilot, technical expert and mastermind behind the prisonbreak. He’s a character that might fit better in a Shadowrun game than D&D, but a crafty tinker is always a useful member of any team in any setting.

Using a reskinned Gnome for Rocket opens up Artificer’s Lore and Tinker and this works well with the Unearthered Arcana Artificer which gives Rocket magic to blast stuff and the ability to infuse tech. Rocket’s stats are so much higher than that stats a racoon would have, that I think the difference more than covers his enhancements. Rocket’s Artificer abilities can be super useful to enhance the weapons and armor of his team members. 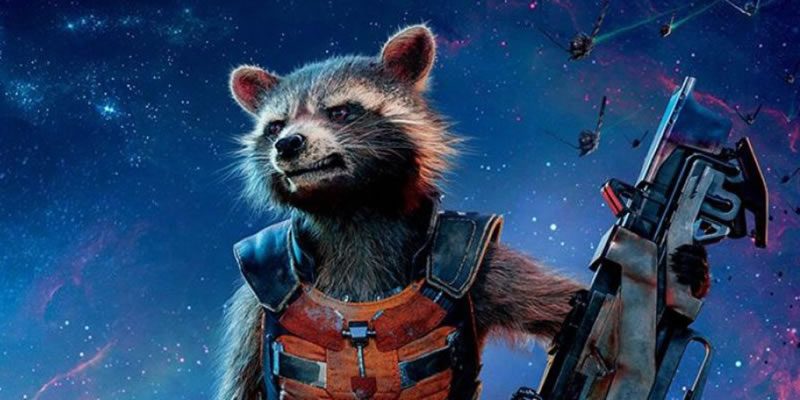 As a boy, Peter Quill was abducted from Earth by an extraterrestrial starship. Twenty-six years later, as a Ravager mercenary (or space pirate), Quill finds the Infinity Stone and quickly finds himself pursued by Ronan, Thanos, the Nova Corps and his abductor Yondu. Leading the Guardians, Star-Lord is able to defeat Ronan and safely hand the stone over to Nova Corps.

I selected Human for Peter’s race, but I think Half-Aasimar would actually be more precise if you wanted to homebrew the race. With Star-Lord’s love of music being such a core part of the movie and his character, I just couldn’t help splitting him between Rogue and Bard. When he isn’t using slight of hand, he’s using singing to distract a foe. Another option might be to go with the Swashbuckling Rogue from the Waterborne Unearthered Arcana. 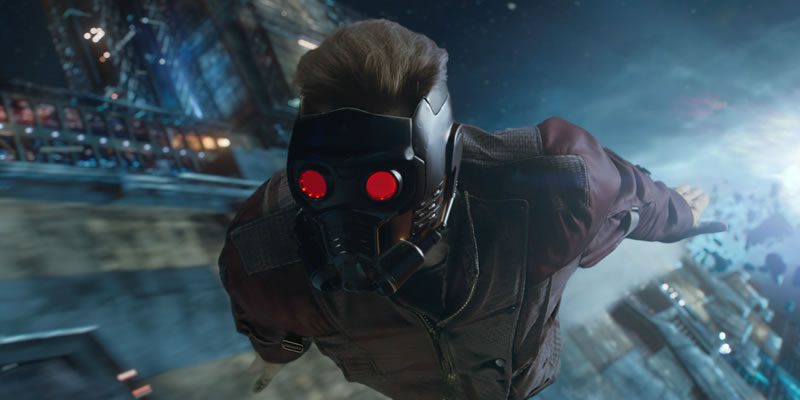 Thanos killed Gamora’s people and raised her as an assassin. Now the last of her species (possibly the Zen-Whoberis), she has been augmented with powers including superhuman strength and agility and an accelerated healing factor. In her efforts to defeat Thanos she allied with the other Guardians.

I’m surprised at how close this build is to the Black Widow build I created back in May. Statistically, Gamora works best as a Human with the Athlete feat to add in her enhancements. 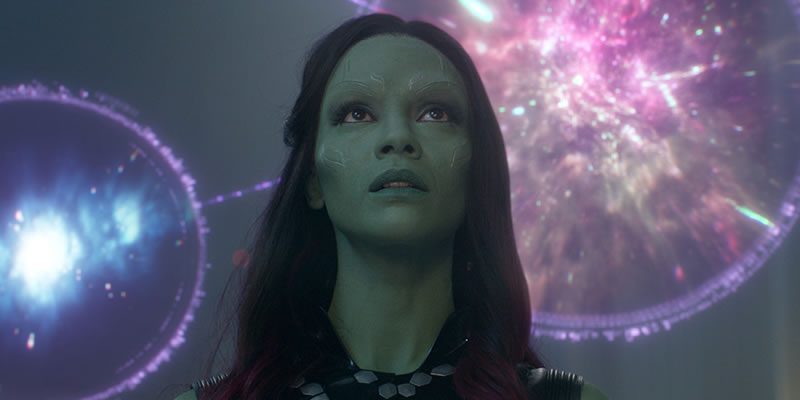 Drax joins up with the rest of the Guardians to avenge his wife and daughter by killing Ronan. He remains with the Guardians recognizing that the others are the first true friends he has ever had. In the past, Drax’s powers have included flight, and the ability to project energy blasts from his hands.

Drax from the movie appears to have super strength and resilience which I thought was a better match to a Half-Orc than a Goliath, but either works well. It’s tough to not want to make Drax a Barbarian raging around the battlefield, but I thought his attacks blend the strength and accuracy of a champion, so why not both? Drax never really demonstrates a range attack, but I’m sure he could throw his “scimatars” if needed or a shiv. 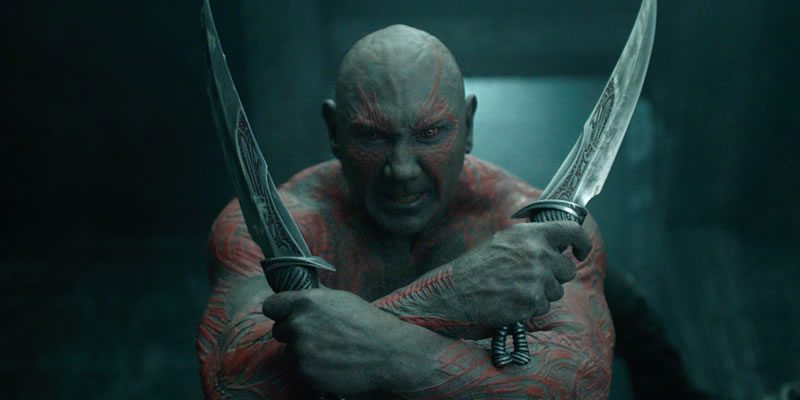