Hypercorps 2099 is a rules system that adds cyberpunk superheroics to the fantasy systems you love. His previous project, the Veranthea Codex goes on sale this month, but you can find him at the AdventureAWeek.com AaWBlog, or in products from Fantasy Flight Games, Rogue Genius Games, and Paizo Publishing. 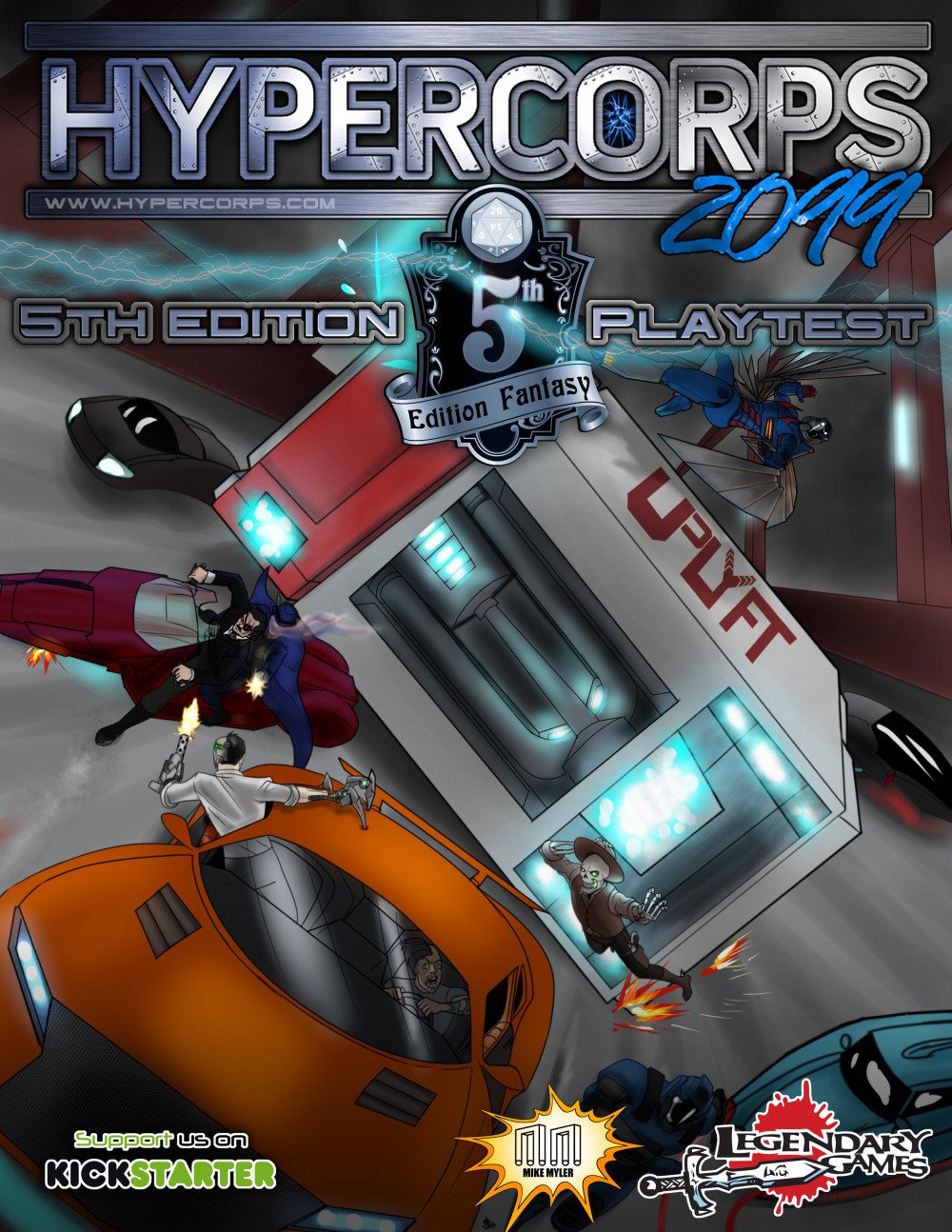 Hypercorps 2099 provides a vivid fantasy world of the future, as well as the Hyper Score system—a way to increase the drama within the game to cyberpunk and superheroic themes. Initially Hypercorps 2099 has been designed for use with the Pathfinder RPG and D&D 5th Edition, but there are stretch goals to include Mutants & Masterminds, as well as others. This is Mike’s second KS, and he’s partnering with Legendary Games who have 3 more successful KS under their belt. The Kickstarter already includes five free PDFs so people can get an idea of what they’re getting into.

For folks who want to know more, Mike’s provided some details on the project:

I have always held cyberpunk very near to my pulpy, squishy human heart. The same can be said for superheroes and comic books—my personal possessions have been successfully whittled down, but I will never, ever give up my longbox. Nor will I ever give up my tabletop RPG collection. That said I’ve often been at a loss when finding players for a game of Shadowrun or Mutants & Masterminds, while drumming up folks for a Pathfinder game (or, these days, D&D 5th as well) couldn’t be easier. What’s a GM for the future to do?

So I made cyberpunk superhero Pathfinder then got Tribality’s Rich Howard to take that and make cyberpunk superhero D&D 5th. The results thus far have been nothing short of absolutely spectacular! This is not a simple or easy task, but I’ve assembled an amazing team of people to make Hypercorps 2099 and you can see some of their fantastic talents at work in the preview PDFs [ Hypercorps 2099 Pathfinder Primer, Hypercorps 2099 5E Playtest, Hypernet, Netjacker Base Class, and A R.I.P.E. Investment ]. There is no doubt in my mind that we are crafting a truly incredible tome.

Incorporating Hypercorps 2099 into your games can be a complete immersion or only take the bits you like best; perhaps your group only wants some cyberpunk fantasy or are keen to play a few superheroes in your medieval campaign. Either way my team and I are poised to more than exceed your expectations—we were supposed to deliver a 180 page book for the Veranthea Codex but more than doubled that—and I cannot wait to sit down at the table, kick on a techno CD, and bust out my official copy of Hypercorps 2099 for an exciting night of espionage and subterfuge in the future!

My Project: Hypercorps 2099 is a campaign setting and rules system that works in conjunction with the Pathfinder RPG or D&D 5th Edition. It will be available in softcover and hardcover 8.5”x11” prints with options for both standard and premium color. Depending on its version, the book will number between 200 and 250 pages.

Who’s it for? Fans of cyberpunk. science fiction, and/or superheroes should be the first in line but everyone can enjoy Hypercorps 2099! Tabletop gamers of all ilks should take a look at the project to figure out what about the campaign setting and rules appeals to them, but I promise that we’ve got something for everybody.

What’s in it? We are building an exciting campaign setting to play in and providing the means for elite intrigue, explorations of the endless digital world, breathtaking climactic battles, and much, much more. The Hypercorps 2099 book covers the altered timeline of planet Earth (starting in 1876 with the arrival of the first “demigrants”), new classes (like the Netjacker base class or the Veloces speedster), new global mechanics (via the Hyper Score system), a cast of exciting NPCs and new creatures, and everything you need to know to run a fantastic futuristic campaign.

When? The book has been outlined and the core team is already at work on their bits and pieces! We have a target publication date of July 2016, although we have every intention of fulfilling rewards before that.

Why Hypercorps? Why 2099? The major antagonists of Hypercorps 2099 are hypercorporations that manipulate (and are sometimes manipulated by) the PCs to get a leg up on their competition. 2099 is just in that sweet spot for a future that’s wondrous but also still gritty and noir.

Help us make this incredible! The Hypercorps 2099 Kickstarter is well on its way to funding by the end date on October 5th but we want to realize as much of this project’s potential as we possibly can and to do that, we need your help! If you want a new experience for your futuristic cyberpunk games as much as we do, don’t let this book slip past you! 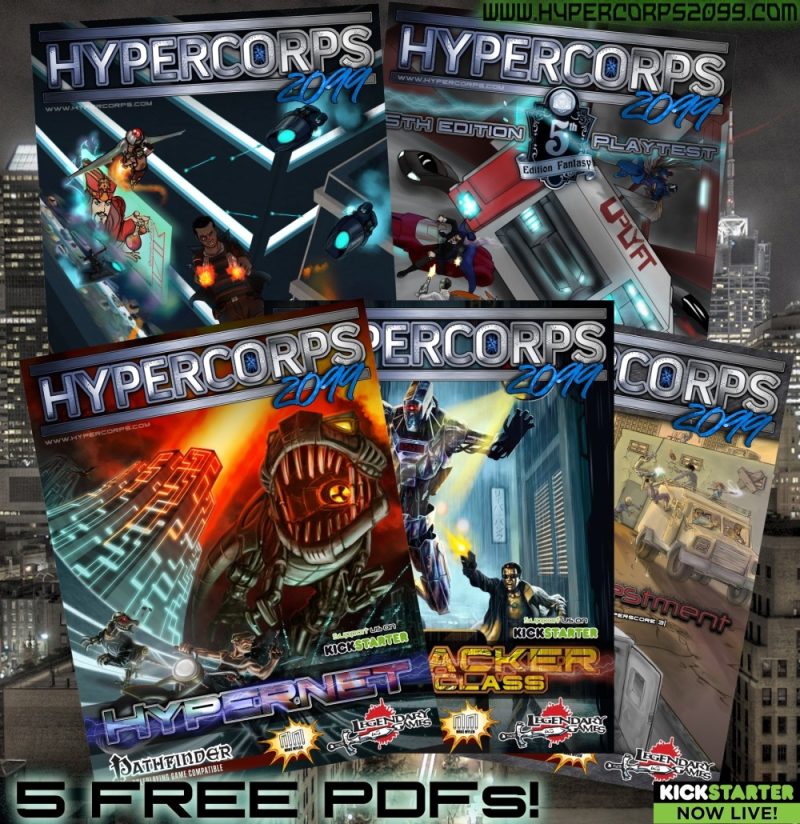 There are over a dozen different levels of backing.

What happens when we pass the goal? We’re definitely going to break $6,000 and there’s no doubt in my mind we’ll pass $8k, so the D&D 5th Edition conversion by Rich Howard and cover artwork by Claudio Pozas (of Wizards of the Coast fame!) are already happening. The real question is how far can we go? Every tier of stretch goal means new content or new artwork from incredible veterans of the industry, but also new systems as well!