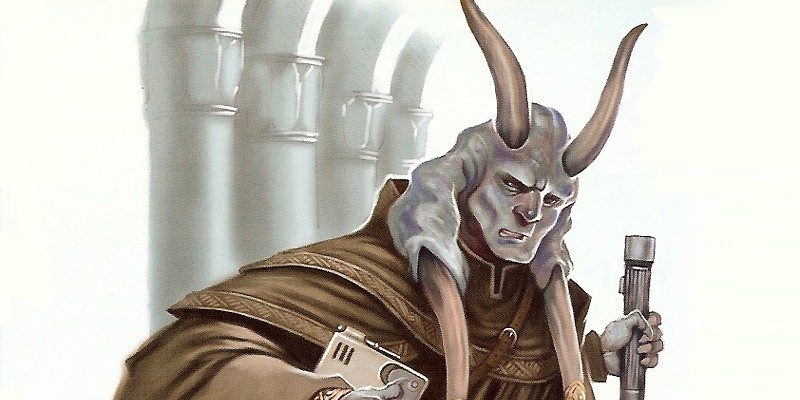 Chagrians are a Star Wars species seen in many of the films and Expanded Universe media, most notably as the assistant to the Emperor, and it’s one I only recently discovered has an aquatic origin. Though there are scores of aquatic sentient species listed in the Wookieepedia, not all of them add something new to a campaign. The chagrians provide an intriguing mix of physical strength, intelligence, and higher education you don’t see in many other races.

Chagrians also have odd quirks, such as a lack of taste, that can lead to interesting roleplaying opportunities. In the Star Wars universe, chagrians typically consume nutrient-dense pastes or capsules, or use scanners when encountering unfamiliar foods to assess their nutrient content. In a fantasy world, the range of food-sources would be limited compared to a galaxy-spanning campaign, making it easier for them to grasp what is good for them and what may be less-than-ideal. Without a sense of taste, other aspects of food such as color or texture would become key, and as an aquatic race, red-muscle meats and hard vegetables may lead to entertaining times at the inn.

Chagrians are a social and cosmopolitan people, living in large underwater cities or in major coastal settlements. I picture them as living in tropical climates closer to the surface, perhaps colonizing archipelagos, large islands, or coral reefs. As such, I removed the “low-light vision” mentioned in their Alien Anthology and Wookieepedia entries. From a game-balance perspective, this allowed me to focus on their education, which I find far more interesting.

The average Chagrian stood taller than a Human with blue skin ranging in tone from light blue to indigo. They were distinguished by two fleshy growths protruding from the sides of their heads, which they called lethorns. As they aged, the lethorns would thicken.[2] Males also sported two horns growing from the top of their skulls. These were once used in underwater duels to attract a mate, and were seen as a sign of the males’ strength and virility. Females lacked the superior cranial horns, but had more pronounced and longer posterior head plates. These could reach halfway down their back.[3] Chagrians also had very long black forked tongues.

Because of frequent exposure to Champala’s oceans, Chagrians lost their sense of taste by adulthood. As a result, they regarded eating as an unfortunate nuisance rather than something to be looked forward to and enjoyed. As they had little interest in eating, Chagrians consumed nutritional substances to replace meals. They carried sensors designed to scan for maximum nutritional value when forced to eat actual food.[1]

As a species, Chagrians were generally peaceful and law-abiding to the point of becoming stoic and obstinate. Many Chagrians were motivated only by basic desires such as sustenance, shelter, and health-care. Chagrian government ensured that every citizen was cared and provided for, so the standard of living for the poorest Chagrian was high compared to the members of other species.[1]

Education was valued in Chagrian society and many Chagrians would travel off-world for advanced university studies. Most Champala-based Chagrians did not speak Basic, however those who traveled off-world learned it quickly.

Ability Score Increase. Your Intelligence increases by 2, and your Strength increases by 1.
Age. Chagrians reach adulthood at 17 years and rarely live natural lives longer than 75.
Alignment. Chagrians are a civilized people who have rarely known poverty or strife. Most chagrians are lawful in alignment, though good, neutral, and evil chagrians are equally known.
Size. Chagrians average 6 feet in height. Your size is medium.
Speed. Your base walking speed is 30 feet. You have a swim speed of 30 feet.
Amphibious. Chagrians are as at home above the waves as below them. You can breath both air and water.
Higher Education. Choose one Intelligence or Charisma-based skill and one set of artisan’s tool kit.  You gain proficiency in each.
Horns. You may choose to deal piercing damage instead of bludgeoning damage with your unarmed strikes.
Resistance. You gain resistance to poison damage, and advantage on saves against poison.
Languages. You speak, read and write Aquan (or Chagri if you wish to include it as a separate language) as well as one other language (typically Marine Trade or Common)

Chagrians are as adaptable as humans and possess the same range of potential backgrounds, though most pursue intellectual, creative, or spiritual professions, such as Acolyte, Guild Artisan, and Sage.

Though physically capable, chagrian adventurers are particular drawn to classes that focus on intellectual and spiritual pursuits, such as the alchemist, bard, cleric, monk, and wizard classes. Of course, the aquatic cleric, paladin, sorcerer, fighter, druid, and ranger archetypes from the Aquatic Builds series are all excellent choices for chagrians, as are bards from the College of the Sea Singers.

Beyond the Wall: Where OSR Simplicity Meets ...