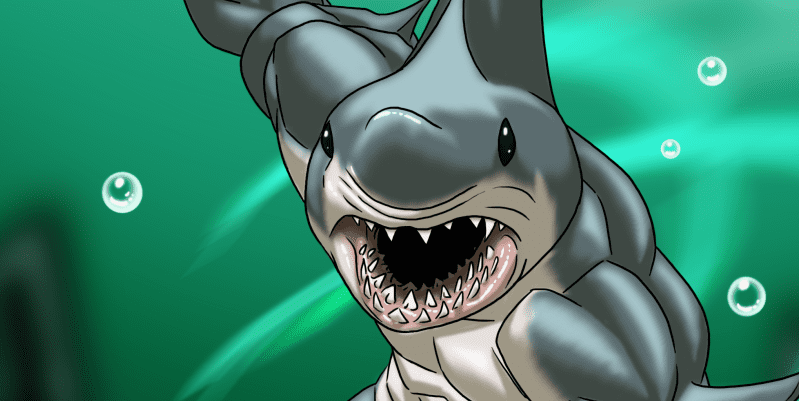 Whether an ancient race or the rare child of an inflicted parent, natural lycanthropes (as opposed to infected lycanthropes) can add a level of intrigue, fear, and drama to your campaign. Systems like Werewolf: The Apocalypse, settings like Kobold Press’ Midgard, and supplements like The Gaming Guide to Lycanthropes, flesh out these fascinating character options for a range of settings. With the exception of Southlands Heroes‘ werelion, the options for natural lycanthropes in 5th edition is almost non-existent.

You can use this basic concept to duplicate other lycanthropes in your games, replacing normal and dire beast forms and enhanced senses for the racial traits here with your GM’s permission.

The wereshark presented below is the ancestor of an inflicted offshoot of sea elves. During their endless conflict with the sahuagin, a famed elven settlement was inflicted with lycanthropy through the machinations of a council of malenti. The civilization soon collapsed under the chaos, and many of the inflicted were killed by their kin, but a large number of the inflicted escaped the massacre. A powerful salenti druid learned of the tragedy and spent years locating the survivors. Though she was unable to cure the creatures, she was able to suppress their violent urges enough for them to establish a productive (and well hidden) village. Their descendants inherited the ability to change their shape and detect the bioelectric fields of their prey, though they’ve lost some of the their ancestor’s fey heritage.

Below is a version of the wereshark that spawned the mechanics you’ll see in Southlands Heroes, and is featured on an upcoming Actual Play series on the RPG Gamer Dad podcast.

Ability Score Increase. Your Strength score increases by 2, and your Constitution score increases by 1.
Age. A wereshark’s lifespan parallels that of sea elves.
Alignment. Often perceived as vicious and cruel, weresharks are actually well organized and methodical. The most common weresharks are lawful neutral in alignment, with some inheriting their ancestor’s tendency toward chaotic and good alignments.
Size. In humanoid form, natural weresharks appear to be strong, muscular sea elves with dark eyes and prominent teeth. Your size is Medium in  your humanoid and hybrid forms, but may be Medium or Large in your shark forms.
Speed. Your base walking speed is 30 ft. You have a swim speed of 30 ft.
Amphibious. You may breath both air and water indefinitely.
Electrosensitivity. You have blindsight to a range of 30 ft. underwater (10 ft. in air). You lose this ability until the end of your next round whenever you take lightning damage. You may not detect undead creatures or constructs with this ability. Exceptions may be made by your DM for constructs powered by electricity.
Natural Shapechanger. Natural weresharks possess the ability to assume two alternate forms—the hybrid shark and the reef shark. As an action, you may change into either your hybrid form or your shark form. You may remain in this form 1 hour, reverting to your humanoid form when the time expires, you go unconscious, you drop to 0 hit points, or you die. You may revert to your humanoid form as a bonus action. Once you use this ability, you may not use it again until you take a short or long rest.

Languages. You can speak, read, and write both Marine Trade (or Common) and Sylvan. 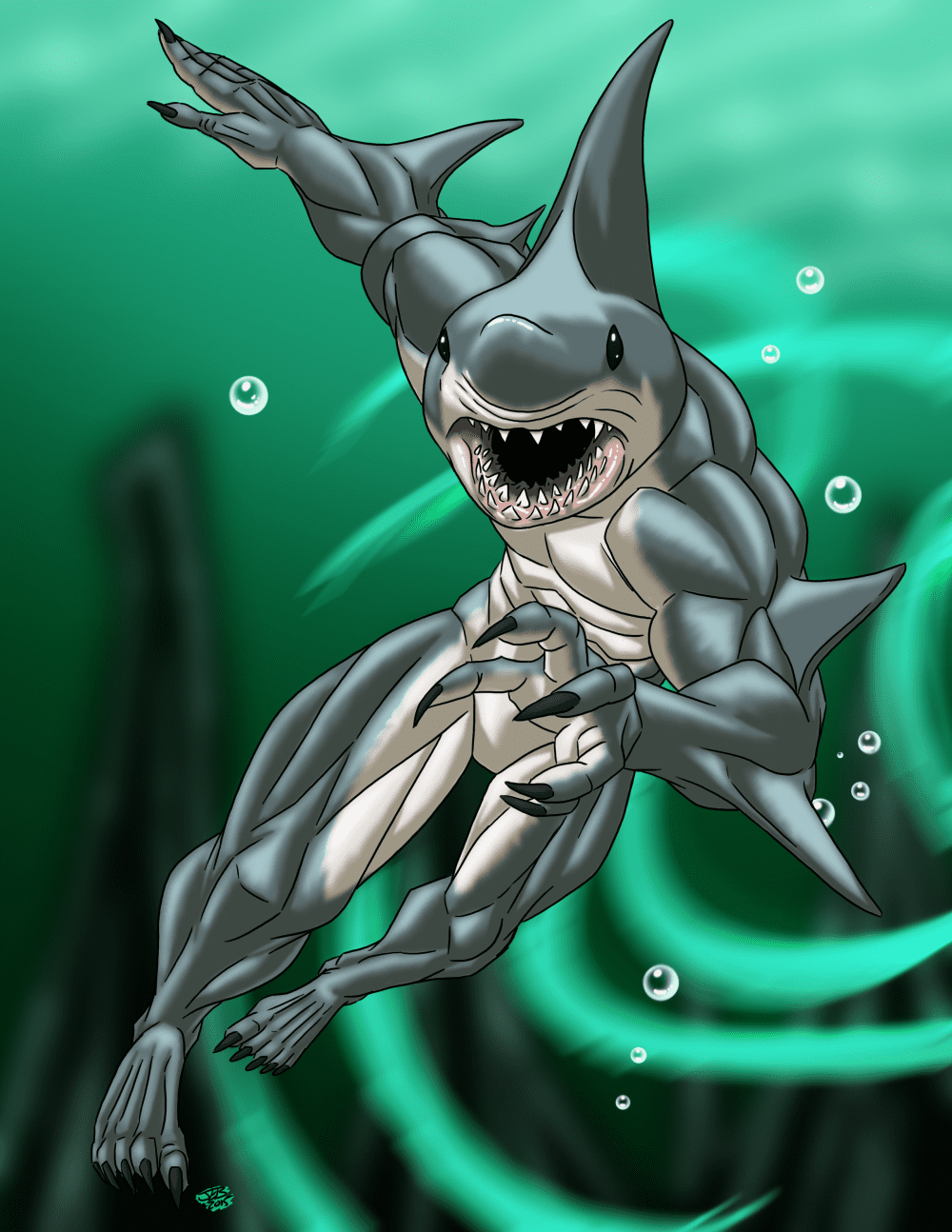 Electrosensitivity: The language for blindsight in 5th edition, especially against things like invisibility or creatures hidden in cover, is vague. Being able to “see” without using sight doesn’t clarify whether or not the invisibility spell covers only visual cues, or is an illusion that covers smell, bioelectric fields, etc. Jeremy Crawford has since answered some of these questions in Sage Advice. In short, invisible creatures can be detected with blindsight, but they can attempt to hide normally when they have cover. If you are playing a mostly surface game, including a pirate game, then 10 feet of blindsight above water is easy to moderate by paying attention to the encounter environments you build. It’s also important to remember there are three pillars of adventure – exploration, social interactions, combat – and putting as much emphasis on the first two is critical to a well balanced game.

If you are running a mostly aquatic game, obscurement from darkness (either at night or below 200m) or “bad visibility” from upwellings may be more common than limited visibility from blooms of microscopic organisms or plankton, kelp forests, or huge schools of fish, but the latter has a direct effect on a wereshark’s blindsight ability. Clouds or forests of living organisms that generate bioelectric fields allow other creatures to hide, both visually and electrically.

Houserules: Blindsight based on a single heightened sense such as smell, electrosensitivity, or echolocation, have inherent limitations that can mitigate the strengths of blindsight. Where the electrosensitivity of weresharks is a great tool for combat, it only detects creatures and objects that create bioelectric fields. Their lack of darkvision makes tasks like reading impossible (not to mention simply seeing farther than 30 feet) and even navigating complex environments like tunnels or caverns more difficult. Though I wouldn’t punish a wereshark for basic, non-combat navigation in the dark, I may impose disadvantage on certain skill checks or upgrade terrain to difficult during combat in tight quarters that may not be a challenge for someone with darkvision.

At our table, greater invisibility prevents detection with blindsight, in addition to its normal benefits. Truesight and detect invisibility work normally.

Lycanthropic Regeneration: Regeneration for player races in 5th edition is a tough trait to balance. The best version I’ve seen yet is from Dan Dillon’s trollkin (Midgard Heroes for 5th edition, Kobold Press). You might choose to have their alternate forms work the same as a druid’s wildshape in regards to hit points, allowing them to absorb some damage in their shark form then revert back to their humanoid form. This could represent a limited form of regeneration that doesn’t overpower the build, especially since their alternate forms have limited hit points. Our experience shows that the reduced HP max in their alternate forms mean that at higher levels they will drop to 0 faster than at lower levels, so leaving their HP the same worked better over the long run.

You could mimic the trollkin’s regenerative ability, allowing the wereshark to spend a certain number of hit dice when they change into their alternate form (1 at 1st, then an additional one at set levels). This will keep it a short-rest ability and be resource limited. We haven’t playtested this, though, so if you do that let us know how it goes!

Resistances and Vulnerabilities: I spent some time talking about the advantages and disadvantages of adding DR to non-magic weapons and/or vulnerability to silver in Southland Heroes for 5th. In short, adding them creates level-dependent balancing issues so I don’t recommend them.

Southlands Heroes includes a lycanthropic sorcerous origin ideal for natural lycanthropes and sorcerers of other races descended from a lycanthrope ancestor.

For more ideas on how to run lycanthropes in fantasy, make sure to check out Bite Me: The Gaming Guide to Lycanthropes, from Christina Stiles and Misfit Studios.